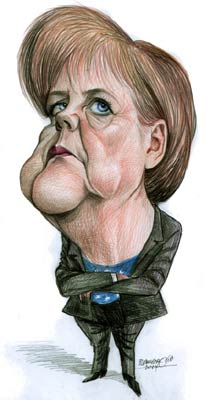 "There are none so blind as those who will not see."

One might think that after denying the evidence of rise and objectives that resulted in World War II, Europeans might be more attuned to modern threats.

Last week on a visit to (oh, the irony), Vice President criticized continued support of the nuclear deal from which has withdrawn. According to BBC.com, under the deal, which was never ratified by the , " agreed to limit its sensitive nuclear activities and allow in international inspectors in return for the lifting of crippling economic sanctions."

And why didn't the ratify the deal? Because, writes , it was "...deliberately negotiated by the Obama administration in a way that enabled it to evade the requirement that treaties be ratified by the ."

Pence said, "The time has come for our European partners to withdraw from the nuclear deal." He called a "murderous regime" and "the leading state sponsor of terrorism in the world."

Speaking at the same gathering, German sounded as if she was channeling the late British Prime Minister when she acknowledged military buildup and the threat it poses to and the world. In spite of those known facts, Merkel, like Chamberlain, remains in denial.

Merkel said, "I see the ballistic missile programs, I see in and above all I see in . The only question that stands between us on this issue is, do we help our common cause, our common aim of containing the damaging or difficult development of , by withdrawing from the one remaining agreement? Or do we help it more by keeping the small anchor we have in order maybe to exert pressure in other areas?"

This takes wishful thinking to an entirely new level. Better to help the younger Iranians who hate the regime to topple it as the is doing in . How can Merkel acknowledge the threat that represents and in the next breath diminish it? Not surprisingly those assembled, many of whom believe as Merkel does, gave her remarks thunderous applause.

The flaw in this thinking -- and in the Munich Agreement, the 1938 settlement reached by , , and that permitted German annexation of the Sudetenland, which led to World War II -- is that Westerners too often impose our morality on those who are evil. Evil should not and cannot be accommodated, or "contained." Evil must be crushed and eliminated. Imagine if the policy of and had been to contain Hitler and his Nazi regime instead of defeating it. For decades, containment of the was the policy of (authored by the diplomat ) until had a better idea. His goal was to eliminate "the evil empire" of Soviet communism.

Students of Scripture will recall G od's admonitions to the Israelites: "You must purge the evil from among you." Deuteronomy 13:5 is one of many such commands in both Testaments.

Purging evil is not easy and requires a choice. It may be more difficult at the start, but if delayed it becomes costlier in lives and the destruction of property on the back end.

World War II should have taught Merkel and the rest of a lesson about denial. One hopes it won't take another disaster with many more deaths caused by Iranian nuclear weapons to show those who survive how mistaken they were.