The Trump trial is bad drama 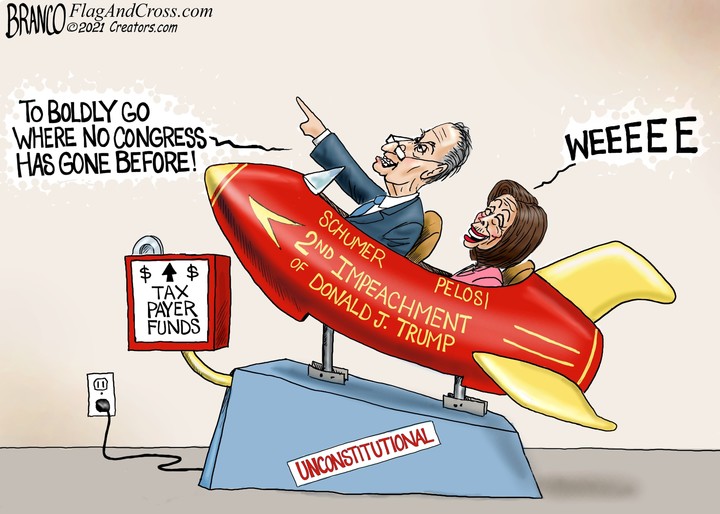 If the second impeachment trial of Donald Trump were a play it would close after one performance. The plot is known, the outcome is certain, and the drama is contrived.

If it were a film, it might be called "Fifty Angry Senate Democrats" (apologies to "12 Angry Men"), or the 2003 film with a title that seems to fit this current dud, "Runaway Jury."

What's the point? The point is to allow Democratic senators to make speeches that seem high-minded, but in reality are low political posturing.

Constitutional attorney John Whitehead is correct when he writes: "Impeaching Trump will accomplish very little, and it will not in any way improve the plight of the average American. It will only reinforce the spectacle and farce that have come to be synonymous with politics today."

Trump's lawyers used the phrase "unconstitutional political theater" in their filing requests that the Senate dismiss the one charge that the former president incited rioters who invaded the U.S. Capitol building on January 6. Democrats fired back that Trump committed "the most grievous constitutional crime" ever committed by a U.S. president.

This is a show trial, designed to satisfy the left's ravenous base that is out for blood and to teach anyone who thinks he (or she) can reform Washington to think again. The message? The Establishment will destroy you if anyone tries again to drain the swamp. Swamp creatures love the swamp. It is their life.

It is also a fundraising tool for both sides, which appears the only bipartisan behavior left in Washington.

Once Donald Trump is again acquitted, he is likely to resume public appearances, but perhaps he should consider waiting a while. Let the tension build, as in any good drama. Then, do not make it all about him. We've seen that play. Instead, comment on President Biden's policies and broken promises. Quote Biden back to himself and tell the country how he is contributing to unemployment, higher gas prices, an economy that had begun to improve, and hypocrisy over executive orders.

Then, after some weeks pass and the media is going nuts because Trump has deprived them of ratings, hold some massive rallies. No name-calling, though. Stick to policies, not personalities.

In their filing to the Senate, Trump's lawyers made these points:

1. The text and structure of the articles discussing impeachment do not grant to the Senate the authority over a former president.

2. The Constitution only gives the Senate jurisdiction over the resident, not the former president, of the United States.

5. Mr. Trump as an elected official has First Amendment rights to freely engage in political speech.

6. Mr. Trump's speech was fully protected by the First Amendment.

Lastly, Mr. Trump's figurative use of the words "fight," "fighting," have been used by many, none are impeachable.

The filing concludes that by accusing the House of not granting Trump due process, that the article of impeachment is "deficient and can only result in his acquittal" and "fails to state an impeachable offense as a matter of law."

A question already raised by legal scholars is whether a president who is no longer in office can be "impeached."

The ultimate intent of Democrats seems to keep Trump from running again in 2024. They likely fear the power of the 73.6 million who voted for him, as they should, because he is a threat to career politicians and the Establishment.

This really bad theater would not even survive as a road show. It's more like a bad circus act.