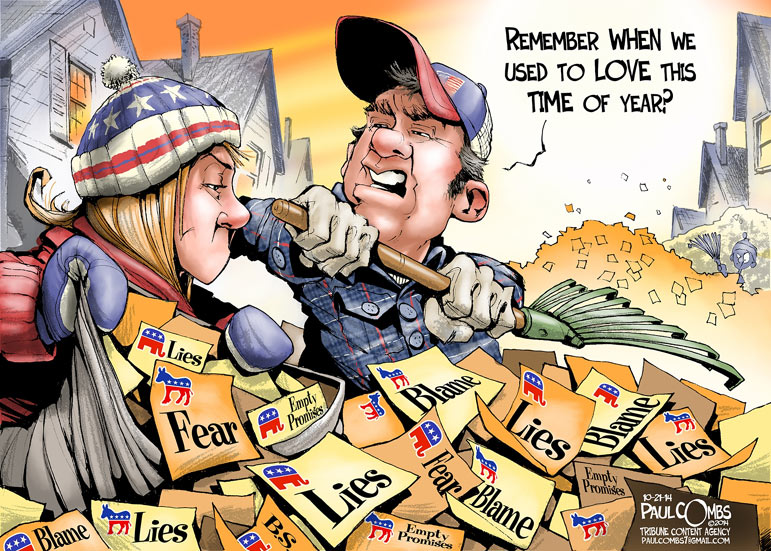 I love for its natural beauty, its people, its food (some of it), its music, its writers and especially its elections, which are shorter, less costly and designed to engage citizens and boost voter turnout.

On , Irish Prime Minister called a general election for . That means a campaign of slightly more than three weeks. In the process, the Irish Parliament was dissolved. What a delightful thought. If only the could be at least occasionally dissolved. It could use some dissolving, or at least disinfecting, after the toxic impeachment and trial of .

Unlike Irish politics, election campaigns increasingly resemble endless wars. Like those wars, campaigns cost too much and never seem to resolve the conflict.

Multi-billionaire says he is willing to spend up to $1 billion of his fortune to either win the Democratic nomination, or if he doesn't, to help the eventual nominee defeat . Recent presidential campaigns have cost over 1 billion (some estimates put the cost of 2020 ad spending alone at over $6 billion), so Bloomberg's spending will ensure this year's presidential campaign will set another record.

As soon -- or possibly before -- this election season ends, people will be talking about 2024 and 2028. It never ends and real problems are rarely solved.

The process begins with candidates establishing "exploratory committees" during which the "explorer" speaks about carefully poll-tested subjects and repeats them ad nauseum, while fundraising and appearing on TV.

Does any of this time and money spent produce real solutions to obvious problems, such as reforming entitlement programs and reducing debt? If it did, by now, wouldn't those solutions have been implemented? The goal of too many politicians is not solving problems but getting elected and then re-elected.

All of this contributes to generally low voter turnout compared to other developed nations. This gives power to activists on both the left and right, which skews the results and gives no clear picture of where most Americans would like to see the country go. For example, consider how often the parties exchange power in and the presidency. Why do we elect a liberal like and then eight years later elect , who has been enacting and promoting the conservative agenda?

isn't the only country that has sane campaign and election practices.

According to mic.com, an American internet and media company based in that caters to millennials, "Election spending is strictly limited in the Each party cannot spend more than $29.5 million in the year before the election. The New York Times reported that the combined spending of both major British political parties in 2010 came out to around the same amount as the American presidential candidates spent ... on expenses related to raising money in 2012."

German political parties may not release more than one 90-second television political ad during a campaign. That would not please networks and local stations, which make a fortune from political ads. TV expenses in America are a major contributor to the escalating costs of campaigns, even though studies show the ads change few minds.

Brazilian elections are held on weekends, making it more convenient.

Not every country's campaign and election practices may be worthy of copying in the , but some are. Why can't we learn from others to improve the process by which we nominate candidates and elect presidents? We can, but will we? A corollary question: What's stopping us? The answer: only our lack of will.