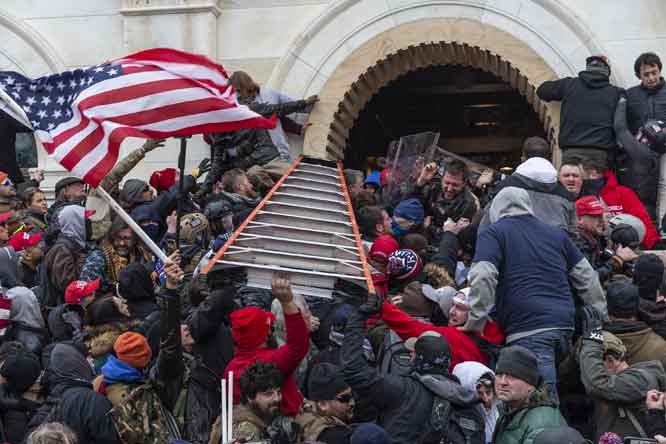 The mob violence that occurred at the U.S. Capitol on Wednesday was deplorable and disgusting. It is the antithesis of a free society that wishes to remain free. Any supporter of President Trump and his policies must denounce this horror with even more vehemence than they denounced the riots of last summer, but the two are not equivalent.

President Trump has stoked these fires of resentment and his weak comments after the breach of the Capitol, which resulted in four deaths and at least 70 arrests, were insufficient and lacked the power of sincerity. In this, President-elect Joe Biden sounded more presidential in his statement. He called it an "insurrection."

Criminal.findlaw.com gives a definition of what happened Wednesday: "Incitement to riot is when a person encourages others to commit a breach of the peace without necessarily acting themselves. This may involve statements, signs, or conduct intended to lead others to riot."

By any fair measurement, President Trump's rhetoric, especially since the November 3 election, has incited people to distrust their own government and the way our leaders are selected. At the extreme, which is what we saw on TV Wednesday and repeated nonstop on cable news, he gave permission, even encouragement, to extremists to practice the kind of behavior they denounce when their political opposites behave this way. He even trashed his loyal vice president. In a tweet he called Mike Pence "weak." Compared to the president's rhetoric and character, Pence is Superman. Et tu, Brute?

The rioters — and the president — have claimed the mantel of "law and order" and "support the police" and yet when it came to obeying the law, preserving order and respecting the police they would have none of it.

Conservatives and evangelical Christians, like myself, have for too long rationalized that ignoring the president's language and behavior was tolerable because of his policies. There comes a time, however (even at this late hour) when one must ask one's self if this was a Faustian bargain that overwhelmed legitimate policy disagreements.

I have been called a traitor, weak, a relic of the past and words unrepeatable in the newspaper because of past criticism of President Trump for lesser things, but in order to retain one's credibility a standard of right and wrong must be sacrosanct. On Wednesday that standard was jettisoned by people who claim to adhere to it.

The excuses, the comparisons with what the left does and the "whataboutisms" won't cut it this time. This is not conservatism. This is not Republicanism. The Republican Party was founded largely as an anti-slavery party. Too many among today's members and among conservatives (not always the same thing) have become enslaved to the person and personality of Donald Trump. This is not hero worship. It is idolatry.

Conservative principles and ideas are not the property of any one person. It is undeniable that President Trump has done many good things for the country, but at what cost?

During the 1960 presidential campaign, John F. Kennedy used a line that still rings in my ears since I heard it as a young college student. About his opponent, Richard Nixon and the Eisenhower-Nixon administration, Kennedy said, "We can do better."

We CAN do better than the mob violence that occurred in Washington. We CAN do better when it comes to the way we speak to fellow Americans. And as much as it pains me to say so, because I have flirted at times with making this bargain with the political devils, we can do better than Donald J. Trump.