Let's out the men in Maxwell-Epstein case 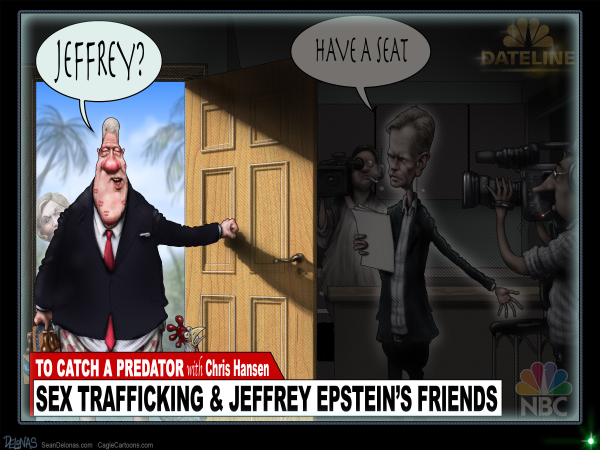 The conviction of Ghislaine Maxwell on five of six charges of recruiting and grooming teenage girls for sexual encounters with disgraced financier Jeffrey Epstein is not and should not be the end of the story.

While Maxwell has been held accountable for her actions, the men who engaged in these encounters with underage girls have not, at least not yet. There is speculation Maxwell could strike a bargain with the court for a reduced sentence if she releases the names and possible videos that Epstein shot of some of the men who traveled to his Caribbean Island and New York home.

For too long too many men have escaped accountability for their liaisons with prostitutes and underage girls. While some have faced criminal charges, most appear to have escaped full accountability. When police arrest prostitutes, the "Johns" too often go free, or pay a fine and avoid publicity.

Perhaps one way to discourage this sleazy behavior is to return to a past practice that seemed to work as a deterrent.

Thirty-five years ago, two Trenton, New Jersey, newspapers decided to print the names, not only of prostitutes who had been arrested, but also the men who solicited them. The Associated Press ran this story in 1987: "It was bad enough being charged with soliciting a policewoman posing as a prostitute, said Jack (not his real name). Then a newspaper printed his name and address on the front page."

The newspapers suspended the practice in 1977 after a man they named committed suicide. They resumed it a decade later. "Jack" was quoted as saying, "My family had a hard time dealing with it. It put us up to public ridicule. We got anonymous phone calls."

The fear of public ridicule ought to be enough to give men who would engage in such acts second thoughts. If laws are not enough to act as sufficient deterrents, maybe shame and ridicule will do the job.

One benefit of knowing whether prominent and wealthy men engaged in sex acts with underage girls would be to remove them or keep them from leadership positions. It has already been revealed that Bill Clinton and Donald Trump were frequent fliers on Epstein's jet. Flight logs introduced during Maxwell's trial show Donald Trump flew on the jet between Palm Beach and New York City airports six times, sometimes accompanied by his then-wife, Marla Maples and infant daughter, Tiffany. Bill Clinton was a passenger at least 26 times.

Records obtained by foxnews.com show Clinton flew without his Secret Service detail for at least five of the flights and that trips between 2001 and 2003 "included extended junkets around the world with Epstein and fellow passengers identified on manifests by their initials or first names, including 'Tatiana.' The tricked-out jet earned its Nabakov-inspired nickname (Lolita Express) because it was reportedly outfitted with a bed where passengers had group sex with young girls."

Neither Trump, nor Clinton, has been accused of anything illegal or inappropriate, but given both men's record of behavior with women, people will draw their own conclusions. Whether or not Maxwell uses any of the information she might have to bargain for a lighter sentence, I hope details about all the men who visited Epstein's island and New York home will be made public as a warning to others who might have illegal and certainly immoral fantasies and think they can escape accountability.

The Washington Post quoted "advocates" for sexually abused girls and women as saying the Maxwell conviction is a "symbolic win" for survivors. It should be more than symbolic. Outing all the men who abused these women will make it so.