Hysteria can make the news go down 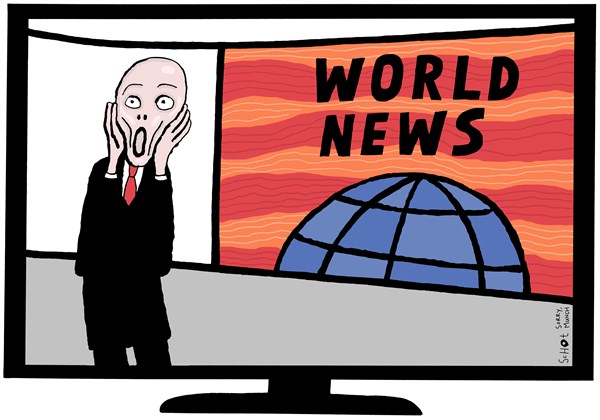 We're suddenly awash in so many crises capable of ending civilization as we know it that there's barely enough hysteria to go around. A worldwide hysteria shortage. Who knew?

The mainstream/legacy/hothouse media has been rubbing sticks together for months, trying to start a fire under the White House to frighten the administration into abolishing fossil fuels before Christmas.

Hysteria used to be the sworn enemy of newspapers. (Television, not so much.) Now everyone manufactures it. Helene Cooper of The New York Times thinks it's OK to spread a little hysteria because becoming "hysterical" is the right and proper response. If you can keep your head when men are losing theirs all around you, as Kipling suggests, maybe you just don't understand the situation.

Paul Krugman of The New York Times, where there's never an encouraging word, says President Trump peddles "depravity" in pursuit of a poisoned world. There's an assortment of accusations elsewhere that the president routinely violates international protocols, tips for good living and maybe Roberts' Rules of Order in authorizing tear gas to quiet the chaos on the border, closely tracking Barack Obama's example on how to break up a mob.

Alexandria Ocasio-Cortez, the congressman-elect from the Bronx who has become the spokeswoman (she elected herself, with a lot of media help) for the incoming class of Democratic members of the House, says the caravan of Central American migrants collecting at the border, waiting to crash their way into the United States, reminds her of the Jews fleeing Nazi Germany on the eve of World War II. "Asking to be considered a refugee & applying for status isn't a crime," she twittered after U.S. Border Agents repelled Central American migrants with tear gas, as Mr. Obama had done. "It wasn't [a crime ] for Jewish families fleeing Germany," she said. "It wasn't for targeted families fleeing Rwanda. It wasn't for communities fleeing war-torn Syria. And it isn't [a crime] for those fleeing violence in Central America."

Hysteria makes intelligent people say dumb things. The Holocaust was unique, an attempt to eliminate an entire ethnic race. Such flaunting of an ignorance of history would once have enraged organizations like the U.S. Holocaust Museum, which took the memory of the Holocaust more seriously than it apparently does today.

The museum said Thursday that Miss Ocasio-Cortez has a point. A spokesman said it was "not out of place to liken the flight of Jews in the 1930s to subsequent refugee crises, even if the conditions in the home countries of the asylum seekers differ in scale or torment."

It fell to Lindsay Graham, the Republican senator of South Carolina (and a Southern Baptist) who is conversant with the grim and ugly history of the era, to correct the record. He recommended that she tour the Holocaust Museum in Washington. "It might help her better understand the differences between the Holocaust and the caravan in Tijuana." The differences, it apparently is necessary to say, are considerable.

The hysteria over global warming, or climate change, or the weather, or whatever we're supposed to call it this week, is not without precedent. The precedent applies to many things. Newly discovered diseases are the old reliable disasters to invite hysteria in any newsroom. Swine flu had its season. We were all supposed to be dead by now. Some journalists have tried to enlist famine as the big frightener, but hunger is somewhere else. The latest diet is what Americans seek. But over-population was once big as a predictor of doom.

A new ice age comes along occasionally. Thirty years ago Newsweek magazine published a slick story about the approaching shroud of ice for the planet. The story was bunk, but well-done bunk. You can occasionally find a remnant of the tale on the Web, repurposed as a knell of global-warming doom. A good rewrite man used to be a treasure coveted by every editor, before editors joined the dinosaurs.

When frighteners are revealed as fakes, there need be no weeping, wailing and gnashing of teeth in the places where old editors dwell. Readers have short memories and viewers have none. "The arrival of the migrant caravan at Tijuana substantially validated all the predictions the [Trump] administration had made about it," observes Conrad Black in National Review, "and even anti-Trump media had some trouble with mobs throwing rocks at U.S. border officials."

But the president will never read or see a climb-down from the hysteria. What he will read and see are stories and television accounts about how the "hundreds of thousands" of migrants in the caravan were figments of the president's imagination. The legacy media is angry. It has been deprived of manufactured graphics and photographs of "caged" children crying for a crust of bread. Nobody can forgive that.