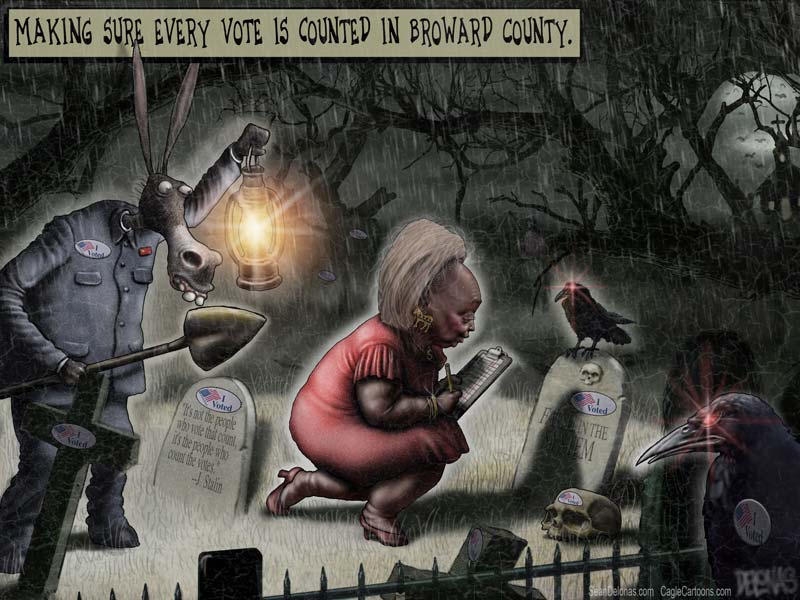 Americans are an impatient lot. Given a choice between corrupt and incompetent, we're likely to choose corrupt. But corrupt-and-incompetent is rarely a popular combination.

That was how the colorful and often corrupt machine bosses of the 20th century survived and prospered. It's a long list — Frank Hague in Jersey City, Ed Crump in Memphis, Thomas Michael Curley in Boston, Tom Pendergast in Kansas City, Tammany Hall in New York, Huey Long in Louisiana. Alas, we often don't get to choose.

The bosses survived because their fiefdoms worked. The garbage got picked up, the waterworks worked, the streets got paved, the sewers got laid, the poor usually got a turkey for Christmas, somebody remembered the orphans. Nobody minded much if an alderman or two prospered on his own. Even a mayor has to eat, and if he eats higher on the hog than he ought to, well, as long as it wasn't too high, who was going to say?

You might think that Brenda Snipes, who presides over the elections in Broward County, Florida, has a sugar daddy somewhere in the shadows. Florida can't seem to elect anyone without making a federal case of it, and this year it has not one but two federal cases, one to elect a new U.S. senator and one to elect a governor. Mzz Snipes is up to her ears in evidence in both of races.

The problem is that Florida is awash in votes, found and counted for delivery just when the Democrats need them. And when the Democrats need them, Broward County is the place to go to get them. Mzz Snipes apparently has so many votes, presumably Democratic votes, she doesn't know where to put them. One box was found stashed away in a storage room at an elementary school, and it was not even show-and-tell day. Another box was found in the trunk of a car at the Fort Lauderdale airport.

Mzz Snipes is by all accounts both corrupt and incompetent. This has made her nationally infamous. Jeb Bush, the former governor who appointed her, now wants to get rid of her.

But after she was appointed by him to succeed another corrupt supervisor, she won re-election four times. "There is no question that Brenda Snipes as the Broward County Supervisor of Elections failed to comply with Florida law on multiple counts," Mr. Bush says, "undermining Floridians' confidence in our electoral process. Supervisor Snipes should be removed from office following the recounts."

Mzz Snipes has a high opinion of herself, and operates more like Ed Crump or Boss Hague than a mere governor or mayor. She was ordered last week by Gov. Rick Scott to report all voting results on election day, as required by state law. She refused. When a judge duly ordered her to obey the governor, she refused to obey the judge, too.

Jeb Bush is entitled to revise the old folk wisdom, from once bitten twice shy; he has been bitten twice and he's likely to be shy for the rest of his life. He appointed Mzz Snipes to replace a supervisor, Miriam Oliphant, whom he had earlier appointed. She violated election law by destroying paper ballots after 12 months instead of the legally mandated 22 months. She posted some election results even before the polls closed. That's a no-no nearly everywhere.


Voting machines were supposed to make stealing an election foolproof. But a machine a man can make can be trifled with by another man. "Show me a voting machine and I can make it play 'Home on the Range,'" the late, great Earl Long, the once permanent governor of "the great 'stet' of Louisiana," famously said. And he probably could, too.

Getting voters to the polls has always been only half the battle. The other half is getting an honest count of the vote. Even when there is no evidence of rank incompetence, an honest count is necessary to make the system work they way it's intended to work. Big-city bosses have mostly gone away, leaving us all at the mercy of incompetents.

Unlike her predecessor, who was marched out of office without ceremony after she was suspended for "grave neglect, mismanagement and incompetence," Mzz Snipes appears to rely on both corruption and incompetence to get the job undone. The Miami Herald reported that an election worker found several bags of "uncounted early ballots" in the Broward County office.

Nobody could be sure where the uncounted bags came from, or where they were supposed to go. Mzz Snipes, meanwhile, mixed rejected and accepted provisional ballots all together. It's all the same. No favorites played here. We're all democrats.