The little surprises of October are at hand 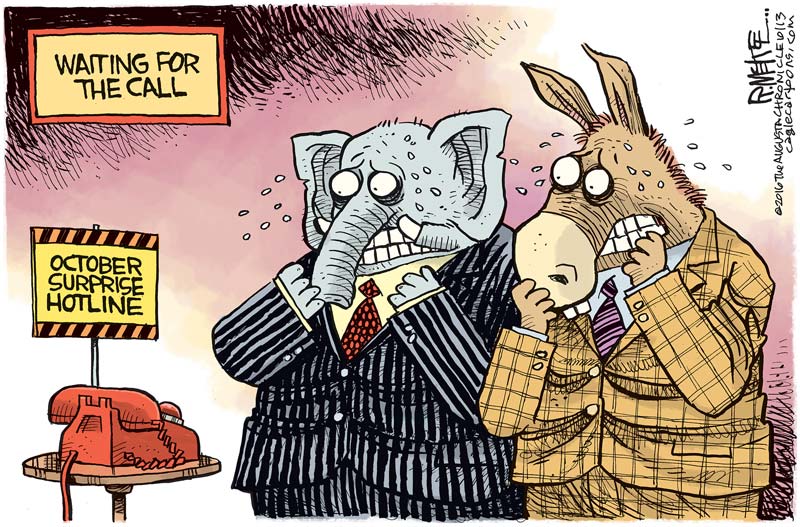 The infamous October Surprise, without which we can't hold a November election, are soon upon us, and right on schedule there's a real one. Almost no one saw this one coming.

A new trade deal with Canada and Mexico, the Kavanaugh hearings and eventual confirmation for a seat on the U.S. Supreme Court are three surprises in one and together they threaten to change everything the wise heads have been telling us about what to expect to see in the headlines of the morning papers on Nov. 7 — that the tsunami had rendered the House of Representatives unto Nancy Pelosi and the Democrats.

With two weeks to go until Decision Day, that's looking less inevitable every day. The tsunami that was to drown Republicans for a generation, or a least for a year or two, might be, as John Fund of National Review puts it, not a tsunami but more likely a blue squall to splash at the knees of Republican incumbents than to drown them.

Three crises could further scramble, in unknown ways, as the campaign moves into the final 16 days.

Charlie Cook of the Cook Political Report, the veteran at calculating odds and handicapping everything that moves, asks in his column whether those "who led the out-of-control demonstrations on Capitol Hill against the Kavanaugh nomination have any understanding of how much damage they did to Democrats and the party's chances of winning a majority in the Senate." He offers a blunt answer. "My guess is they don't, but Senate Democrats probably do."

He puts the long odds of Democrats taking the Senate at no better than 1 in 5, and thinks it likely not only that the Republicans are close to having a lock on the Senate, and with a little breathing room, perhaps to 52 or 53 seats."

The verdict in the House, say the oddsmakers, still looks like a win for the Democrats, but no one is as sure about that as they were a fortnight ago. Even The Washington Post said so on the front page of the Sunday paper. A new poll for the Wall Street Journal-NBC News suggests a nine-point advantage for the Democrats in a poll taken in a national calculation. But the House is elected not nationally, but in 435 separate elections. This poll is a reminder, always needed in the homestretch of a political campaign, that races always tighten in the final days. The Republicans can accurately said to be within striking distance of a result that would enable the Grand Old Party to remain, if not grand, at least semi-grand.

Unexpected events, like the Saudi slaying of Jamal Khashoggi in of all unlikely places the Saudi consulate in Istanbul, can be another kind of October surprise, further scrambling the odds. This tale has taken on so many twists and turns that it's difficult to see how it could get weirder, but the Turkish president promises to release new details of what and how it happened this week. That, too, could scramble the odds again, particularly given that President Trump has been close to the Saudi crown prince, the emerging villain in public speculation about what happened in the consulate.


The additional October Surprise is the Honduran migrant march, which the marchers vow, in sharp and angry words, will end in triumph in the United States. Triumph would be breaching the border and managing to stay here. President Trump, calling the march a national emergency, says that won't happen.

What's happening with the migrants enroute to confrontation north of the Rio Grande is potentially the most disastrous of all. The marchers are brave, in their foolish way, but very foolish. They're challenging not only a president who doesn't flinch, and they're misjudging a fair but determined foe which is compassionate and patient, but only up to a point.

Donald Trump, being Donald Trump, can expect to be blamed for whatever happens when the migrant army reaches the Rio Grande. It comes with the territory. But no president, not even Barack Obama and his strategies of drawing red lines that he has no intention of enforcing come what may, and always leading from behind, could retreat from duty when the nation's border is under attack, even if by a ragtag army which boasts that it is spoiling for a fight.

Agence-France Press, with perhaps an early indication of how the international media would portray the United States and the president's resolve says Mr. Trump has "seized upon the crisis in the run-up to the U.S. midterm elections, reviving the immigrant-bashing rhetoric that helped him get elected in 2016."

But there's always the little surprises of October, and they can grow.