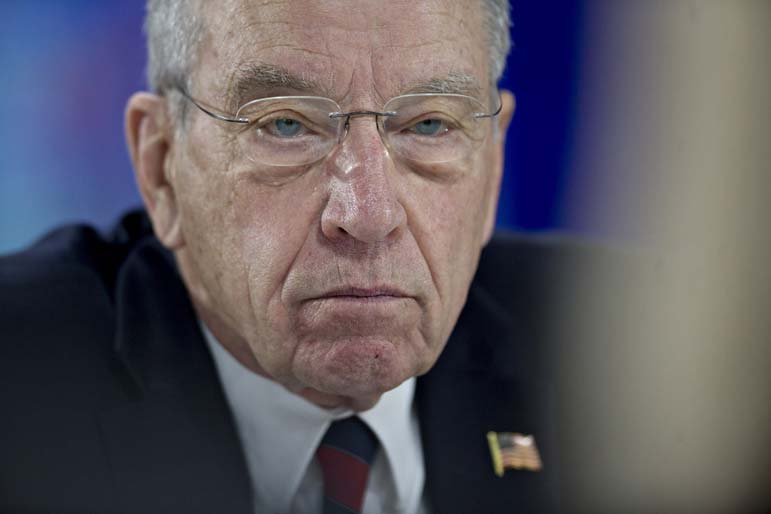 Everyone knew a September Surprise was coming. Supreme Court appointments are a big deal. The Republicans are determined to get an "originalist" court, one that honors the Constitution as written by the Founding Fathers, subject to amendments duly adopted.

The Democrats are determined to preserve "a living document," subject to the wishes and dreams of certain judges guided only by the moment. Amending not necessary. Therein lies an unbridgeable divide, where the bang and clatter of angry debate is the music of the times, to which all must dance.

Desperate times require desperate measures, and the Democrats in the Senate, with their media constituents usually standing by to enforce prevailing whims and fancies, were in desperate straits.

The president submitted the name of Brett Kavanaugh to fill a vacancy on the Court, and in his confirmation hearing nobody could lay a glove on him. Something desperate, a Hail Mary pass for 90 yards with 00:07 on the clock in the fourth quarter, was all that was left to try.

The Democrats and other liberals had controlled the U.S. Supreme Court as a second legislative branch of government for many decades, and now control was slipping away. Hence the September Surprise just as the Senate Judiciary Committee was about to approve Mr. Kavanaugh and send the nomination to the full Senate.

But as October Surprises go, this one is pretty thin soup even a month early. A woman of a certain age, as the French put it, suddenly remembers that 35 years ago, when she was a 15-year-old high-school sophomore, she went to a party she's not sure where, but it might have been in Montgomery County just outside Washington, and there were kids drinking beer and making whoopee, but she can't remember for sure because everybody was enveloped in clouds of estrogen and fogbanks of testosterone.

Something happened, she isn't sure what, as sometimes happens when teenagers gather in a salon to sip lemonade and discuss Plato, Socrates and the seven wise guys of Athens. She remembers that whatever it was it turned out to be something ugly.

One of the boys pawed at her outer garments and squeezed against her and made her squeal. She said there were four guys in the bedroom with her, but on second thought it might have been only two, and one of them might have been Brett Kavanaugh, 17 years old. He says emphatically that it was not him, and a third person in the room backs him up.

The girl, who grew up to be Christine Blasey Ford and a professor at Palo Alto University, wrote a letter to Sen. Dianne Feinstein of California in July, telling her of her conveniently "recovered memory." She wasn't sure what even a U.S. senator could do about such a letter, but she asked Mrs. Feinstein to keep her name out of it in any event.


The senator, aware of her reputation as a woman of refinement, sober judgment and fair dealing, kept the letter as if of no importance and said nothing. The Kavanaugh hearings proceeded apace, and Sen. Chuck Schumer, the leader of the Democrats in the Senate, decided the sell-by date approached, and called in The Washingt

on Post to drop Mrs. Feinstein's bomb. This was not the bombshell the Democrats coveted, but it was time to do or die. Mrs. Ford then identified herself.

The biggest mystery is why Mrs. Feinstein didn't drop her bomb earlier.

• Was she saving it to drop when it might give the Democrats an excuse to demand a delay of game?

• Why didn't Mrs. Christine Blasey Ford say something to family, friends or even her doctor at the time she said it happened?

• Why did her therapist's notes say she told him there were four evil-doers in the bedroom and she now says there were only two?

She doesn't remember the exact year it happened, exactly where it happened, who invited her to the party, whose house it was, how she got there or how she got home. Yet it was so traumatic that she required psychiatric help three decades after she had said nothing about it.

The most generous explanation is that she just doesn't remember clearly after all these years. Or that she made it up.

Sen. Chuck Grassley, the Republican chairman of the Judiciary Committee, is doing the right thing, arranging for the committee to hear out Mrs. Ford and to hear Judge Kavanaugh's rebuttal. If the Democrats plead for more time, they'll reveal their true game.How much time would the hard working senators need?

Mrs. Ford's lawyer is already complaining that the Republicans on the committee intend to play "hard ball," intending to "grill her." She may have been led to believe, by Mrs. Feinstein or Mr. Schumer, that she could merely accuse, anonymously, and the Democrats and friendly media would take care of the rest. That's not how it any longer works.

She may have a September Surprise coming herself.