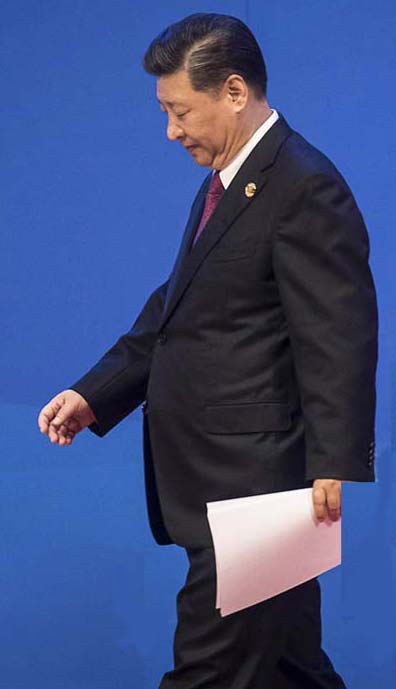 President Xi Jinping of China is about to learn what despots him before learned, to their consternation, puzzlement and grief. He has set out, as Mao Zedong did before him, to crush and squeeze the Christians in China until he has eliminated them all. Certain Marxists, atheists and various "principled" soreheads eager to eliminate or suppress religious faith in the United States might get a useful caution by watching how suppression doesn't work.

Millions of little Sunday-school boys have heard the parable of the village blacksmith. A boy stood at the village smithy's forge one day, taking the shade of a chinaberry tree, watching the smith pounding a glowing ingot of iron against the anvil.

"That must really be hard on the anvil," the boy said.

"No, there's no sign of wear or damage yet. But I sure have worn out a lot of hammers."

Just so. Religious faith will be thriving long after President Xi has worn out his hammers and no one will remember the worms that rendered his carcass fertilizer for the field. You might think that a Chinese despot would know this better than almost anyone, despot or not. China has seen the millennia turn like the pages of a calendar blowing in an icy winter's wind. The demons of the despots have done their damndest, and the faith of the heart continues to relieve fears, bind up the wounds of the faithful, and gladden hearts through the ages.

Nevertheless, the despots, as dumb as anvils, keep trying. The Christian faith was introduced in China as early as the seventh century. Chairman Mao tried to eliminate Christians and all traces of the faith. They were jailed, tortured and humiliated in imaginative ways. Mao died, as must we all, in 1976 and left a billion countrymen fed up with the Communist Party and searching for something to nourish the soul that Marxism denies.

Growing millions in China look to the Bible for answers, for the verities of right and wrong, for moral guidance in an age when the very idea of established right and established wrong is challenged by the belief that "it all depends."

Prosperity flowered in China when the Communist Party sanctioned capitalism as long as it was called communism. But the prosperity was seductive. Public morality collapsed and power trumped justice. Children died when they were fed tainted infant formula and others died when schools were built with cheap materials, and soon collapsed. This led rank and file Chinese to conclude that greed and materialism has its limits and yearn to return to an ancient ethics code.

"After the collapse of communist ideology," Zhang Lijia, a prominent Chinese writer, tells the Associated Press, "no value system has been in place to fill the spiritual vacuum. China has witnessed a religious revival in recent decades precisely because of this vacuum and relaxed control [of the people]."


Despots in all ages live in dreadful fear that revolution will simmer just beneath their feet. Sometimes it does. Officials who once tolerated Protestant "house churches," which meet in private homes, are now cracking down on them, shutting down some and enabling others to grow. President Xi introduced something he calls "thought reform," a gentler version, perhaps, of Orwell's "thought crime," for which a citizen could be imprisoned for merely thinking "bad" thoughts. "Thought reform," so far, refers only to political indoctrination, similar to the political indoctrination that scorns free speech and stunts learning in the college classroom in the United States.

But President Xi makes no attempt to hide or disguise his ultimate goal. Posters in one backward province instruct the Chinese to replace Christian imagery in their homes, prints of paintings of the Cross and Jesus, with portraits of President Xi. Chinese officials are not.

"Through our thought reform," one township committee officer proudly tells the Associated Press, "they've voluntarily done it. [Thought reform] is aimed at Christian families in poverty, and we educated them to believe in science and not in superstition, making them believe in the party."

Christ's admonition to "render unto Caesar the things that are Caesar's, and to G od the things that are G od's," works pretty well in the West. Despots like Xi Jinping think bigger than that. Why give G od anything when everything is there for the taking? But in the end suppressing religious faith doesn't work. Suppression of Christians just makes more Christians. President Xi will see.