The four noisy horseladies of the Apocalypse 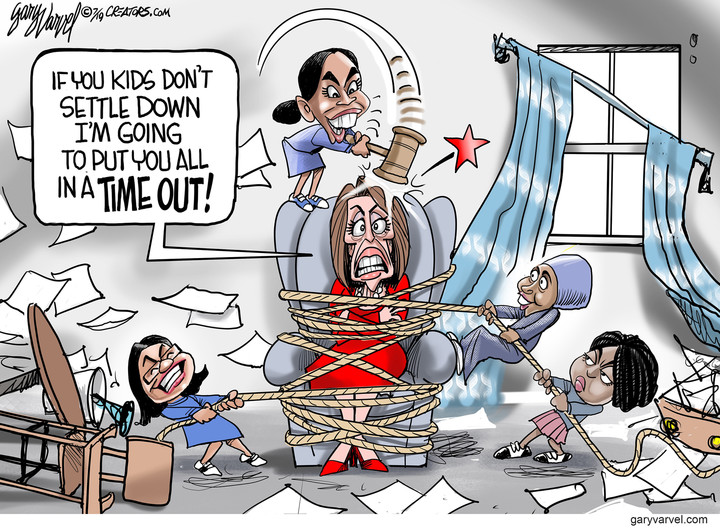 Any man who makes it to 1600 Pennsylvania Avenue is a smart guy, by definition. Climbing a greasy pole is impossible, as anyone who has tried it will tell you, and the presidency is the greasiest pole anywhere.

So how could a man smart enough to do the impossible forget the first rule of politics, that when your opponent is in the act of destroying himself, the smart thing to do is get out of his way. The Donald, on the other hand, doesn't pay attention to first rules. He makes up his own, and never lets a thought, however fleeting, go unsaid, but there he is, atop the pole.

But he sometimes makes staying there more difficult than it has to be.

Only days ago, Rep. Alexandria Ocasio-Cortez and her "squad," the infamous "four horseladies of the apocalypse," were well on their way to destroying the 2020 Democratic campaign to keep the House and regain the White House.

These ladies were Alexandria Ocasio-Cortez, the horselady in charge; Reps. Ayanna Pressley of Massachusetts, Rashida Tlaib of Michigan and Ilhan Omar of Minnesota, all saddled up and ready to ride. They weren't sure what the targets of the day should be, but they were eager for bang-bang.

Democrats everywhere were biting each other's ankles. Nancy Pelosi's were the bloodiest in town.

Something called "Justice Democrats," a political action committee organized by Alexandria Ocasio-Cortez's chief of staff to send several senior Democrats to the showers, was making life miserable for Democrats who thought they had been around long enough to have seen everything. But shooting at their own troops was something new in politics.

The "Justice Democrats," whose very name suggests that only they are capable of delivering justice, are supporting a primary challenger against Rep. William Lacy Clay of Missouri, a stalwart of the Congressional Black Caucus, and they're looking for a challenger for Rep. Hakeem Jeffries of New York, chairman of the Democratic Caucus.

They're dreaming big, recalling how Alexandria Ocasio-Cortez successfully challenged a previous chairman of the House Democratic Caucus, who had been a member of the House for two decades.

The Horseladies of the Apocalypse, having taken over the House, and generously leaving Mrs. Pelosi with the illusion that she's still in charge, have taken their strategy from Donald Trump's playbook: Go big, say mean and offensive things about all rivals, raise all the Cain you can and let the devil deal with the hindmost.

The speaker had let some of her freshmen have their head, and now they're getting too big to spank.

Only now has she warned AOC and the horseladies, "Do not tweet about our members and expect us to think that is Okay." She may have waited too long.

When you're too big to spank, anything and everything is OK.

Miss Ocasio-Cortez quickly told the speaker that her remarks were "racially motivated," which was the nice way of telling her she was a racist, a charge with stinging power back in the day before everyone was called a racist.

AOC bewailed "the persistent singling out to the point where it was just outright disrespectful the explicit singling out of newly elected women of color." She later explained that Mrs. Pelosi was "absolutely not" a racist.

Calling her one just seemed like part of the fun.

All the president had to do to get maximum effect was stand aside and watch.

On Sunday morning the president played hooky from Sunday School and set off for his golf club in Sterling, Va., but not before a round of tweets.

"So interesting to see â€˜Progressive' Democrat Congresswomen, who originally came from countries whose governments are a complete and total catastrophe, the worst, most corrupt and inept anywhere in the world (if they even have a functioning government at all), now loudly and viciously telling the people of the United States, the greatest and most powerful Nation on earth, how our government is to be run."

Well, yes, that's what congresspersons do, decide "how our government is to be run," and congressional voices range from dumb to silly to asinine.

The four horseladies are all citizens, nevertheless, and all but one of them were born in the U.S.A. They all sound like ingrates, and new citizens of our present day, unlike immigrants in the days of yore, do not always wear their love of country as a badge of gratitude.

Mr. Trump let slip an opportunity to let these silly women hang themselves with their ingratitude. But there will be more opportunities between now and November 2020 to keep the president's Twitter account busy.

Nancy Pelosi's long night of dread is far from over.