Not quite a return of the Gong Show 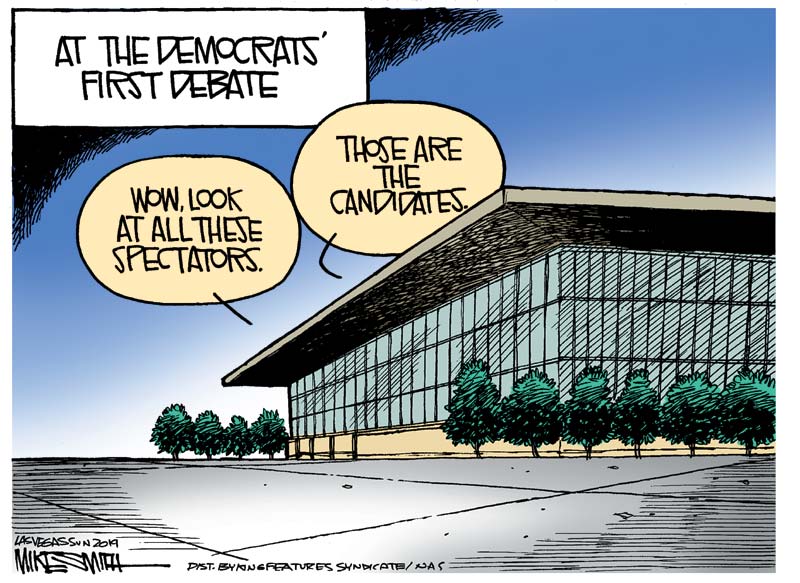 The Democrats are finally tuning up for the party's first presidential primary debates next week, and so far the only topics they can be expected to "debate" is who hates Donald Trump the most and who loves socialism the most.

Nothing much to debate there. Hating Donald Trump is no doubt fun for those who like hating — soccer, ladies' professional basketball and curling demonstrate that any sport can attract capacity crowds if the arena is small enough. Trump haters need fresh material. Can't anybody come up with a new reason to wish the Donald ill?

Bernie Sanders, who has lately flirted with the slippery slope, down which all old politicians slip and few return to a life after death, reckoned he had put on the brakes with a full-throated celebration of socialism. "Come on in," he told a group of callow college students the other day, "the water's fine."

Bernie imagined that his embrace of the economic scheme that has never worked puts him farther left than any other Democrat. Perhaps not so long ago it would have, but then a newly elected member of the City Council in Denver said she won with her promise to impose communism on Denver "by any means necessary."

The toothsome but fatally loopy Candi CdeBaca (even she sometimes mispells it) does not look big enough to handle an AK-47, the weapon of choice of revolutionaries out to employ "any means necessary," but there were immediate comparisons of Miss CdeBaca to Alexandria Ocasio-Cortez, the reigning pin-up queen on the farther reaches of the liberal left.

The Democratic debates next week will be high among the firsts of the unfolding campaign. There are 23 Democratic candidates for president, with more in the wings and already the most ever. So many, in fact, that the feast of intellect and sobriety must be spread across two nights. There will be the welcome and unprecedented sight of so many women that the scent of estrogen will hang heavy over the hall.

The bad news for the Democrats is that the scents, sights and sounds in the hall will reveal just how the party has fallen, in the words of one pundit, under "the tyranny of the 70-somethings." This goes against common expectations.

Joe Biden and Bernie Sanders, the most likely to succeed in the primaries, are closing on 80, which may be the new 75, but they're not the saplings they used to be.

"Democrats are, as they often remind us, the party of progress and the future," writes Andrew Ferguson in Atlantic magazine. So why has the public face of the Democratic Party become so weary and wrinkled? "The question seems to rival those enduring unanswerable mysteries such as â€˜What happens when you die?' and â€˜Why did Mick Taylor quit the Rolling Stones?'"

The phenomenon is never more apparent than in Washington, where Democrats, adept in finding a tax-paid sinecure, arrive to do good and quickly learn to do well.

This may be a reflection of the fact that everybody, rich Democrats and poor Republicans alike, are living longer. "People in their mid-to-late 70s are thick on the ground," as Mr. Ferguson reminds, "while in an earlier era, of course, you'd have been more likely to find them under it." The Democrats already owe a debt to Mayor Pete of South Bend. He's only 37, old enough to vote but barely old enough to make the constitutional age to take the presidential oath, and he makes the median age of the 23 candidates respectable.

Joe Biden, who is said to be leading President Trump by a mile in the early polls, will have the most to lose if he has the typical Biden moment. Such early polls are beyond meaningless.

Good ol' Joe doesn't have to have "a breakout moment," but the others do. Mayor Pete might elaborate on his recent remarks that America might already have had a gay president, perhaps James Buchanan, but if so that might take away the thrill of Mayor Pete and a male inamorata in the White House. Elizabeth Warren, lately getting a respectful look, might be approaching her breakout moment. A real live Indian, if indeed Pocahontas qualifies, where Andrew Jackson once presided would be an ironic twist for the ages. There could be surprises, perhaps a big night for Amy Klobuchar. Beto is well past his sell-by date, and probably Kamala Harris is, too.

Everybody else looks like an also-ran already. But bring â€˜em on. The suspense is killing us.