Why the deal with Mexico is a good one 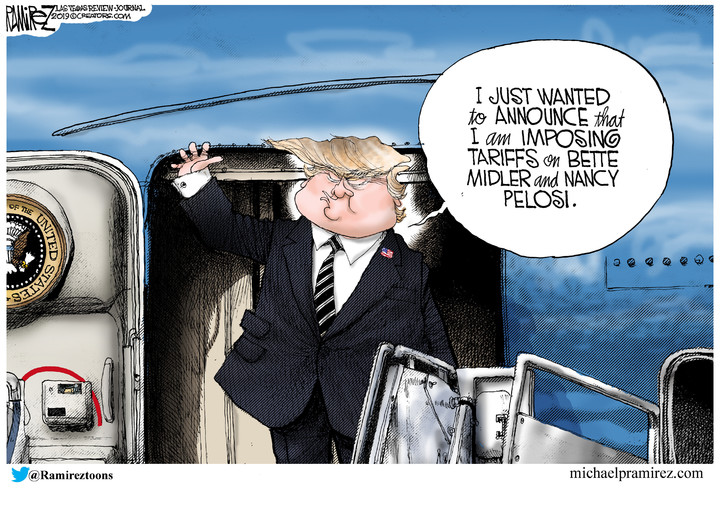 It's not easy being a Democrat, and it's even more difficult to be a leader in the party, a speaker of the House or the leader of the minority in the Senate. It's true that hard times can make a money eat red pepper, as the anÂ­cient wisdom goes, but Democratic hard times are encouraging a rare run on red pepper.

President Trump won a dramatic victory last week with his tariff offensive against free-loading friends and allies. Mexico, which has been dumping migrants at its border with the United States, agreed under threat of rising tariffs to take steps which Washington will monitor to eliminate, or at least temper, the chaos on the border.

This reduced Nancy Pelosi, the speaker of the House, to a frenzy approaching hysteria. Instead of celebrating an agreement that both the United States and Mexico say is something good -- each side gave a little and took a little -- Mrs. Pelosi said the president's winÂ­ning diplomacy had undermined America's place in the world. She was "deeply disappointed" with how the nine days of negotiations turned out.

It's not clear how deep the disappointment ran across Capitol Hill with the announcement that Mexico had agreed to reduce the waves of illegals marching across their land en route to the Rio Grande, but there were a lot of faces, both Republican and Democrat, with considerable egg on them. What Mrs. Pelosi's called the president's "threats and temper tantrums" had won the day.

The New York Times could hardly bring itself to report the news, fit as it was to print, and did what it could to protect the snowflakes who make up so much of its audience. The dispatch in The New York Times tried to hide the how-and-why of the good news under the headline, "Trump calls off plan to impose tariffs on Mexico," and couldn't get to the actual point of the story until the eighth paragraph, when the newspaper conceded that Mexico had agreed to "take unprecedented steps to increase enforcement to curb irregular migration," including the deployment of its national guard throughout the country to stop migrants from reachÂ­ing the United States."

This can be used in journalism schools across the land to teach a lesson in hiding the lead of a story a reporter (and his editors) had rather not report. But there's some "bad" news here, too. The declaration by the two countries included an "ominous" warning, as well, that if Mexico's actions do not have the expected results, additional measures could be taken.

But what some might call "ominous" is merely "prudent" to others, a performance guarantee that is hardly ominous to a party of the second part who intends to keep his word, which the president's negotiators expect Mexico to do. Cynicism does not become the newspaper of record. It's cynicism not shared by Secretary of State Mike Pompeo. He says the United States "looks forward to working alongside Mexico to fulfill these commitments so that we can stem the tide of illegal migration across our southern border and to make our border strong and secure," he says. This is playing the warm and cuddly, but it's what a secretary of State has to say, and does no harm if he doesn't swallow it without a grain or two of salt.

Follow-through from Washington is important. The chaos on the border is real, and getting worse. More than 144,000 migrants crossed the U.S.-Mexico border last month, 133,000 of them illegally, and 10,000 of them were unaccompanied children.

Not all of them were from South America, but most were. Some of them were Africans, who have learned that it's easy to pose as Latin American migrants. Some of them were from the Republic of Congo, fleeing from a fresh outbreak of Ebola fever -- 2,000 afÂ­flicted, 1,300 dead so far -- and some were waved through to settle in the United States to await a date for a hearing on permanent settlement. These are hearing dates that many migrants do not keep. They're poor, often uneducated, but they're not stupid.

The Mexican government and the educated class long ago figured out how to manipulate a succession of American governments and presidents, learning which buttons to push and how far to push them. The Mexican government urges the United States to address "the root causes" of the problem (a familiar cliche rendered meaningless by experience), though we hardly need the usual task force of bureaucrats, professors and assorted hangers-on to figure that out.

Common sense is difficult to apply to the immigration crisis, because bad news on the border is the ill wind that blows good for some, a steady supply of cheap and easily abused labor and prospective voters for Democrats, who see them as the key to a permanent majority.

But the deal with Mexico is good news for the rest of us.