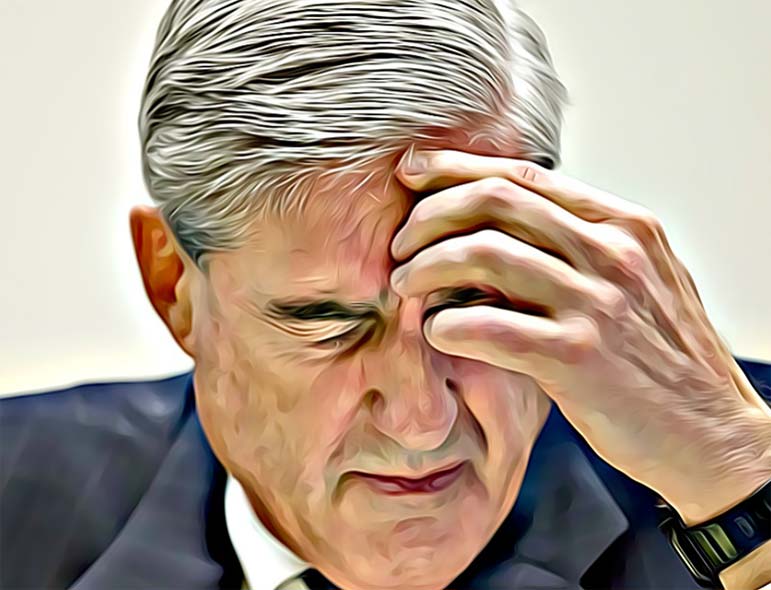 Robert Mueller wants to feel the love again. His press clippings have faded and life hasn't been the same for the man choking on rectitude and righteousness, not since he turned in his account of his disappointing pursuit of Donald Trump and the Russians.

Over more than two years trying to find the president in bed with Vladimir Putin, he didn't even find the bed.

After months of anticipation of the gift from the righteous Santa, all the Democrats got in their stockings were two or three lumps of coal. The Democrats turned on Santa with a vengeance.

What expectant Democrats thought was rectitude turned out to be betrayal. He didn't deliver the goods.

Nobody appreciates having his feelings hurt. After weeks of brooding, Mr. Mueller finally emerged from hiding to give a valedictory speech -- nine minutes and counting -- to say goodbye to the Justice Department.

He packed up his pens, writing pads and what was left of a family-size box of bicarbonate of soda, and did his duty.

Boiled down, his goodbye speech was something like "hey! guys, can't you take a joke?" He meant to do something to erase the results of the 2016 election, he really did, but a man of rectitude must be "guided by the principles of fairness."

"It would be unfair to potentially accuse somebody of a crime when there can be no court resolution of an actual charge," particularly since, so far as Mr. Mueller was able to figure out, there was no crime.

He clearly thinks the president ought to be put in the dock, but somebody else has to do the job he was paid to do. Mr. Mueller wouldn't do anything like organizing a lynch mob, of course, but he might stand in the shade of the hanging tree and applaud.

Mr. Mueller and his team of crack investigators are said to have been frustrated by a lack of public and congressional understanding of just how justice, and the Justice Department, actually work.

He couldn't run the unicorn to ground, but it wasn't his fault.

Justice Department guidelines say a president can't be indicted. That's work for the House of Representatives, and it's called impeachment.

So, just to be fair, Mr. Mueller wants evÂ­erybody to know that he couldn't have indicted the president even if he had wanted to, but because he's a stand-up guy he won't say whether he would have if he could have.

He did say the Russians he indicted for piddling offenses they will never have to answer to because they're already back home in Russia, are innocent until proved guilty.

If anybody wants to think the president is guilty until proved innocent, well, it's a free country and everybody is free to think what they want.

The report Mr. Mueller turned in shows that he found no evidence of a conspiracy to collude with anybody about anything, and if he were the righteous stand-up guy he wants everybody to think he is, he would have said so, loud and clear. But then he would never feel the love again. The righteous stand-up guy left it to William Barr, the attorney general, to decide whether Mr. Mueller's evidence would support an impeachment prosecution for obstruction.

This was the decision that Mr. Mueller should have made himself, but righteous stand-up guys sometimes have to get someone else to do their work.

Mr. Mueller's grudging conclusion that he and his crack investigators found no evidence of presidential collusion with the Russians to cook the 2016 election left the Democrats with nowhere to go but to the proposition that the president tried to obstruct Mr. Mueller.

The righteous stand-up guy took a powder on that, too. Mr. Mueller's report makes clear that nothing was obÂ­structed. "Not the FBI counter-intelligence probe," The Wall Street Journal observes, "and not his own. No witnesses were interfered with, and Mr. Mueller was allowed to issue nearly 500 search-and-seizure warrants and interview anyone he wanted, including anyone in the White House."

Nancy Pelosi is entitled to feel the love, or at least appreciaÂ­tion, for trying to keep her cowboys from driving the camÂ­paign wagon off the cliff.

The Democrats have a chance -- nothing like Hillary's slam dunk, but a chance -- to take back the White House next year, and the cowboys obviously prefer the entertainment of an impeachment frenzy to the hard work of winning an election.

Such a frenzy would be right up Donald Trump's street, with 24/7 tweet storms and new sensations in every round-the-clock news cycle. The Democrats can impeach, but that's only the half of it.

The needed majority would never convict. Mrs. Pelosi understands that, and further understands that a failed impeachment would guarantee four more years of the man the Democrats live to hate.