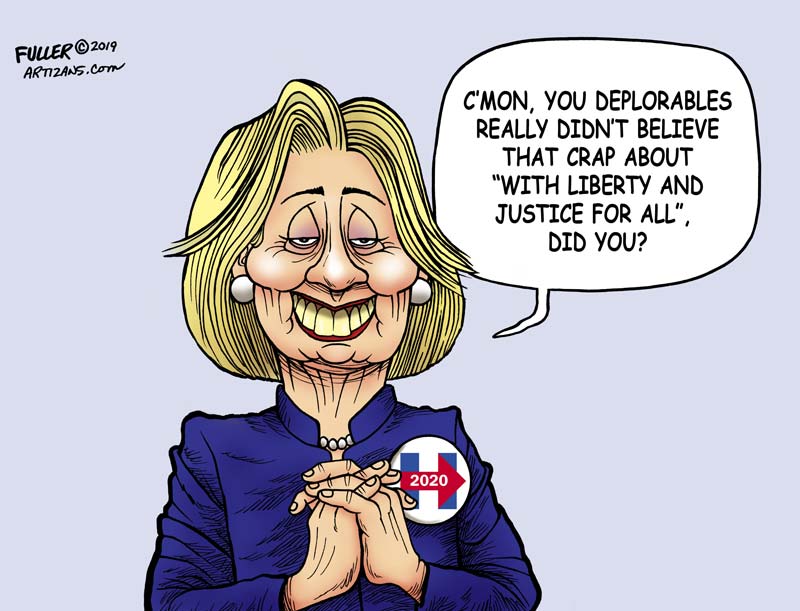 The Democrats have given up electing a president next year. What else could explain the party's obsession with the election of four years ago? Hillary lost, fair and square, but they just can't let it go.

Jerry Nadler and the House Judiciary Committee continue to pursue Attorney General William Barr, their surrogate target for President Trump, demanding that Mr. Barr flout the ancient law protecting grand jury proceedings, or else they will turn it into "a constitutional crisis."

Nancy Pelosi blows sometimes hot and sometimes cold on whether the House of Representatives should impeach the presiÂ­dent. She has come up with the novel idea that, since the Democrats can't do it, the president should impeach himself.

Mrs. Pelosi knows better than to pull the pin on the impeachment grenade. Unlike some of her callow colleagues who are making so much noise about what fun an impeachment would be, the speaker was on hand when the Republicans impeached Bill Clinton, with a far better case, and she saw what happened.

Bubba survived, as Donald Trump would surely survive. Bubba, whose only memorable presidential accomplishment would be the sex-education tutorial he imposed on the country, went on to win a second term as president. So might the Donald.

The House red-hots want the spectacle and the fireworks that accompany any attempt to dispose of a president, but it's the cleaning up afterward that would be the job for the diminishing number of responsible grown-ups in Mrs. Pelosi's party. She understands that the "constitutional crisis" Jerry Nadler and the House Judiciary Committee is cooking up is likely to go on for multiples of months, precious months the party could be devoting to replacing a president in the way America has always replaced presidents.

President Trump said Thursday that the attorney general, and not himself, would decide whether Robert Mueller would be permitted to appear before the House to testify about his investigation.

Some of the obsessed Democrats, who were so sure that Mr. Mueller would find that the president had colluded with Vladimir Putin to fix the 2016 election, have now persuaded themselves that Mr. Mueller has kept to himself secret evidence that he is eager to deliver now to whatever waiting ears he can find. The House Judiciary Committee has those waiting ears.

"I'm going to leave that up to our very great attorney general, and he'll make a decision on that," the president said Thursday, and then, with his usual irresistible impulse to say more, repeated his complaints against Mr. Mueller. "He's somebody that is in love with James Comey," he said of the former director of the FBI who has become one of the president's angriest critics, ever eager to pour venom on troubled waters. "But to me, it looks like a re-do [of the Mueller investigation]."

Mr. Nadler and the Democrats are determined to make Mr. Mueller explain himself, and why he didn't file obstruction charges against the president. Democrats in the Senate are eager to press that discussion, too.

Mr. Nadler poses as the man standing between America and oblivion, the man for all seasons, or at least a season for partiÂ­san buncombe. "We've talked a long time about approaching a constitutional crisis," he says. "Now we're in it. Now is a time of testing whether we can keep a republic, or whether this republic is destined to change into a different, more tyrannical form of government. We must resist this."

Hillary Clinton, the fair maiden bound, gagged and tied to the railroad tracks in this melodrama, was lately in New Hampshire and told everyone how she was abused and mistreated in 2016, and now she's waiting for someone to ride up on a white horse to avenge fair lady. "You can run the best campaign," she told a forum in Los Angeles, "and still have the election stolen from you."

On the other hand, some Democrats with 2020 vision look forward to the next election. One of them is Joe Biden, who took a remarkable 32-point lead in the primary polls this week. He apparently read in the newspapers that Hillary lost and got over it. He polled 46 percent in and Bernie Sanders got only 14 percent.

Such early polls have to be taken with a lovin' spoonful of extra-coarse kosher salt, and have little to say about an election 18 months hence. But such polls show which way the wind is blowing now, but there's lots more blah, blah, blah to come.

Elvis has left the building, and so has Hillary.