The old bird who can't remember how to fly straight 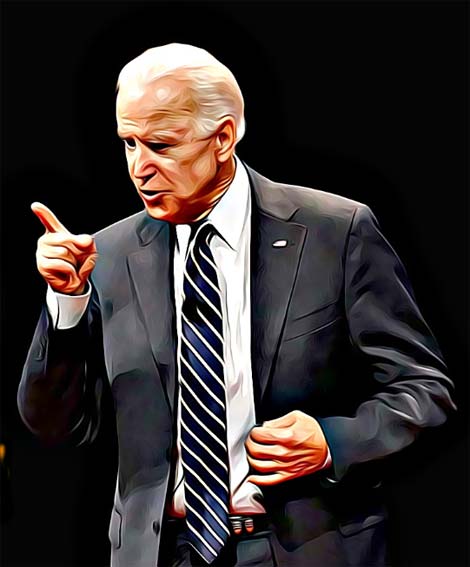 Joe Biden is a game kid. He thinks sex-change surgery might fix things with the crazies in the party if it has to come to that. Anything to get another shot at the White House.

Joe has been busy repudiating himself and all the things that contributed to his reputation as the wise old bird of a party that desperately needs a wise old bird.

But many Democratic red-hots seem to think that reclaiming the White House is not nearly as important as settling scores from the past, including the election of 2016. The red-hots enjoying watching Joe promise everything but that sex-change operation.

The veep can't say he was not warned. "Beyond gender, on issue after issue, if Biden runs for president he will have to run away from his own record," columnist Michelle Goldberg writes in The New York Times. "He — and by extension we — will have to relive the debate over the Iraq war, which he voted to authorize. He'll have to explain his vote to repeal the Glass-Steagall Act, which, by lifting regulations on banking, helped create the conditions for the 2008 financial meltdown.

(Biden has called that vote one of the biggest regrets of his career.)

In 2016, Hillary Clinton was slammed for her previous support of the 1994 Violent Crime Control and Law Enforcement Act, which contributed to mass incarceration. Biden helped rewrite the law . . . " Even the ladies concede that Joe is decent, kind, compassionate, thoughtful, a devout liberal if not much of a progressive (it's those shoulder rubs), and other good stuff. Some of the ladies even give Joe points for pushing Barack Obama toward the left on issues like gay marriage — the former president and Hillary both said marriage was a rite between only a man and a woman as recently as a decade ago.

Joe takes seriously the claim of a great sex crime wave on college campuses. Many of the ladies understand that Joe is the best-known and maybe even the most beloved man in the race. But this year, in what not so long ago was the party of Jefferson, Jackson and FDR, that counts only with those holding the vulgar idea that winning is what elections are about.

You might expect that people who want to be seen as "progressive" would put statutes of limitation on certain crimes in the past. Joe, a devout Roman Catholic (he still crosses himself occasionally on making a point), runs afoul of the likes of Rep. Gerald Nadler, who thinks religious people should keep their beliefs to themselves if they can't get rid of them entirely. Religious faith must defer to those who can't figure out which bathroom they want to use.

But Joe's unforgivable crime was not something he had anything to do with. Joe was born a white man. He can do something about his sexual persuasion, but not his race. White men are just persona non grata in the modern Democratic Party, and anyone who tolerates a white man is a bigot.

Bernie Sanders might get a pass, but that's because he's not actually a Democrat, and is running as one because that's all that's available. He's not only a Socialist, but a Marxist, as in Groucho's famous formulation that he wouldn't be a member of a club that would have him as a member. Bernie wouldn't be a Democrat, but he'll take the party's presidential nomination unless his fellow geezer can stop him.

A lot people, including some Republicans, think Joe would make a good race against Donald Trump and could, if he gets all the breaks, even win. So what's the party's problem? Can a sane man win a popularity contest in a nut house? Anything is possible, but that's not the way to bet.

Joe is trying hardest to turn himself into a pretzel explaining his part in the confirmation of Supreme Court Justice Clarence Thomas in the long ago and his treatment of Anita Hill, a onetime colleague of Justice Thomas when he was the chairman of the Equal Employment Opportunity Commission. She said he sexually harassed her. He said it never happened.

Mzz Hill, like the women who accused Brett Kavanaugh, never could get her story straight. In her testimony, she remembered events and people from years before, but repeatedly said she couldn't remember people and events from recent memory.

Clarence Thomas was confirmed by a narrow margin and public opinion polls said the public believed him by an overwhelming margin.

Joe presided over the hearings, and he says now he believed her. He did everything he could to help her, but told Senate colleagues later that he thought she lied. And now it's all coming home again. Consider the surgery, Joe. Repudiating yourself is not going to be enough.

The ladies will never forgive you.