Paul Ryan and the long goodbye 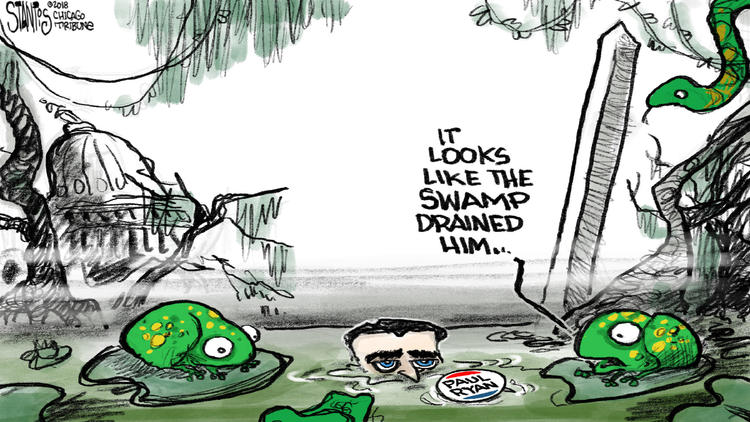 The speaker of the U.S. House of Representatives has a difficult job. He has to spend a lot of time with congressmen, after all, and the typical congressman, Republican or Democrat, is composed of two pounds of ambition, three pounds of compressed gas and eight ounces of brains, stuffed into a one-pound bag. Who can deny him a hermitage in the Wisconsin wilds.

Paul Ryan himself is a gentleman, kind, honorable, compassionate and a decent fellow who would call the fire department in a minute if he saw a neighbor's house on fire. He's a quiet wonk, cut in the pattern of the late Wilbur Mills, who found all -- almost all -- the erotic fancy he needed in the U.S. Tax Code. Wilbur, a faithful Democrat from the Arkansas of yesteryear, kept his copy of the Tax Code on his bedside table, and Mr. Ryan, at 48 is a younger man who can keep the numbers and figures in a sharp and agile mind. Who needs paper and ink?

Even Democrats think well of Mr. Ryan, or did, until he turned his talents to redeeming promises of Republican congressmen who told voters in loud and consistent voice they would drain the swamp of its vile critters.

When he was a young man of sunny disposition and innocent dreams, Democrats were content to describe Mr. Ryan, as E. J. Dionne does in The Washington Post, as "a young, idealistic family man."

Mr. Dionne, faithful as always to Democratic talking points, now says the speaker has been "transformed into an enabler for the most morally indifferent and utterly selfish president in our nation's history." Memories are short in Washington. A vulgar talker who only boasted of grabbing ladies by their whatevers is hardly more morally indifferent and utterly selfish than the rapist who leaves his battered victim with only advice to lay a piece of meat on the bruises he left her with.

Trump Derangement Syndrome is a curious sickness, which compels afflicted pundits to make every observation and insight a requiem for a lost election and a commentary on the man they hate for depriving them of their virgin queen.

The Ryan resignation reveals a previously unknown concern among Democrats and other liberals for the health and future of conservatism, for which they have spent many waking hours trying to figure out how to destroy. The Washington Post, where every lamp and lighted match is dedicated to preventing democracy from dying in darkness, cries buckets of tears worthy of a bayou full of crocodiles over the demise of conservatism.

"Democracy is necessary," The Post assures its readers, "because the status quo is not perfect and the people must have a voice in changing it. But the status quo isn't all bad, either, which is why, in a democracy, conservatism is necessary." (We feel better already.)

There's more. "The United States needs a decent, pragmatic, conservative party that emphasizes what traditions and institutions are worth preserving amid change. The lesson of Mr. Ryan's retirement is that no such party exists." Woe is surely us. The house organ of the Democratic left dreads having to housebreak the round of cooler, more conscientious conservatives that will surely follow.

The Democrats and the liberal establishment, including neutered Republicans, are terrified that the man in the White House is but the first wave of conservatives arriving for battle, and coming waves will be without Mr. Trump's braggadocio and baggage. Paul Ryan could have been one to lead these second-wave conservatives but, exhausted by the rigors of dealing with the man who broke up the fixed game and who can't quit looking for more furniture to break up, has no further stomach for the fight that follows.

The Democrats can be grateful that Mr. Ryan wants to be a lame duck through what will surely be a mean and unforgiving campaign. Ducks, with their webbed feet and smoothly rounded bill, are not equipped for a fight to control the barnyard. If Barack Obama invented leading from behind, Mr. Ryan wants to lead from repose in a quiet place. Quitting the fight was his idea, and the Republicans can honor his service without making the rest of his term as speaker a goodbye worthy of Sarah Bernhardt's annual farewell tour. He'll learn that there's no such thing as "a take-charge former leader." The trappings of power, the corner office, the long black limousine, the deference of supplicants and the eagerness of donors to write a check will slip away more quickly than he can imagine.

He must remember that he was the reluctant speaker, who now wants to get out while the getting is good. He should leave with modesty, grace and the usual warning not to let the door hit him in his hindquarters.