Is that a dark and grim future dead ahead? 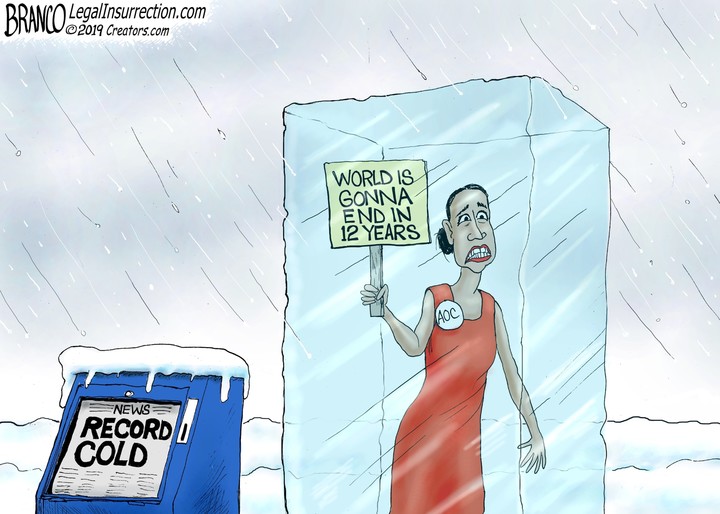 The end is near. The man in the sandwich board bearing that dread message in a thousand carÂ­toons, the object of laughter and derision, is about to be vindicated.

A lot of people, looking at the front pages of the newsÂ­papers and watching moral ruin and evidence of depravity dance across their television screens, are sometimes tempted to think so. Alexandria Ocasio-Cortez, the tattered soul (such as it may be) of the new Democratic Party, suggests that the young and fertile even quit making babies, such is the prospect of the grim future dead ahead.

"Our planet is going to hit disaster if we don't turn this ship around and so it's basically like, there's a scientific consensus that the lives of children are going to be very difficult," says the oracle of the Bronx, "and it does lead, I think, young people to have a legitimate question, and like, you know, â€˜is it OK to still have children?'"

A man (or woman) looking only to the media for answers might well think we already have too many children, and they're all "progressives," i.e., liberals, many of them resemble the least educable of the millennials, and most of them are default fantasists. And it's true that there are a lot of odd and scary things going on out there.

An outbreak of locusts of "biblical proportions" is spreadÂ­ing through Africa, from the Sudan and Eritrea on to the Red Sea and to Egypt and Saudi Arabia, eating everything in sight and plinking their ugly little carcasses on roofs, tents and windows, as if in unholy concert. Huge swarms of the little beasties have been compared to the 10 plagues of Egypt, as set out in the Book of Exodus to describe how G od punished Egypt after the pharaoh refused the demand of Moses to let his people go.

Something similar is on the way now to north Africa, says Keith Crossman, the locust expert at the United Nations. "The next three months will be critical to bring the locust situation under control before the summer breeding starts." And there's more: Frogs and fish are falling from the sky over Malta.

There are scientific explanations for such phenomena, but there are many other things for which there is no explanation but the mischief of man (and of course the lady of his house). There may be a very secular lesson in the air for many mighty nations, including ours.

Luke Kemp, a historian at Cambridge University in Britain, observes that "Great civilizations are not murdered. Instead they take their own lives." The profesÂ­sor quotes the noted sociologist Elise Boulding that modern society can suffer from something she calls "temporal exhausÂ­tion," and "if one is mentally out of breath all the time from dealing with the present, there is no energy left for imagining the future."

"Temporal exhaustion" may explain what is happening to our own culture and society, why the grown-ups in America — and by extension the West — have turned control of everyÂ­thing over to their frightened children.

The Green New Deal is a telling example. The senior Democrats, from Joe Biden to Elizabeth Warren to Kamala Harris, know it's the work of a child's imagination (Bernie Sanders may actually think it makes sense) but are terrified of saying so. Rather than correct the children, they think the kids are cute and count on the nonsense to go away.

A powerful civilization like ours, with its reserves of learnÂ­ing and enterprise, is likely to right itself. But at age 243, judged against recorded history, it's no sure thing.

Carthage lasted less than 700 years, the Roman Republic less than 500, Ptolemaic Egypt 300, and the classical Greeks only 265 years. It's someÂ­thing for the wary to think about.

But ours is not any longer a thoughtful civilization, preferÂ­ring to immerse ourselves in the trivia of Super Bowls, the lace on the gowns of the ladies on Oscar night, the economic fantasies of our children as told by scribes of press and tube who can't themselves write a simple declarative sentence.

Round and round it goes and where it stops nobody knows, but wasn't all that cleavage on display at the Academy Awards simply terrific? Maybe the end really is near. Some of us have got to have a little relief.