Billy Graham in the belly of the beast 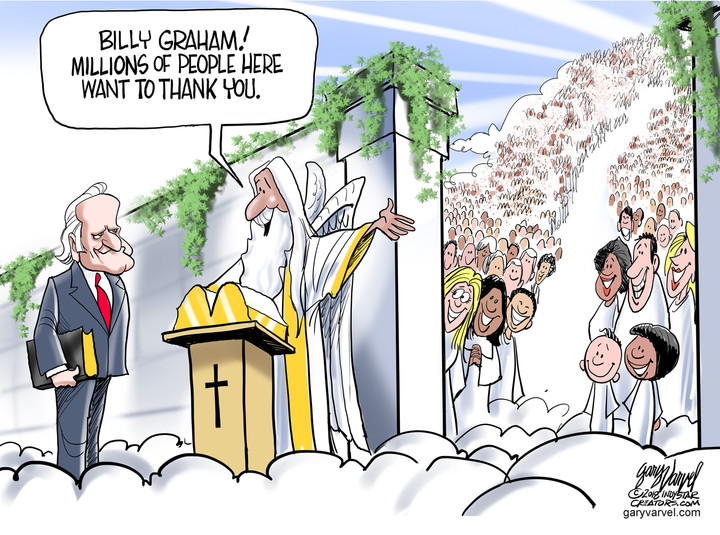 Five of us from The Washington Times were invited to Pyongyang in April 1992 by Kim Il-Sung, the grandfather of Rocket Man. The man called "the Great Leader," regarded as the founder of the Democratic Peoples Republic of Korea, wanted to open his hermit kingdom to the world, and we were the first Western newspapermen to test whether North Korea could withstand a platoon of American editors and reporters in their midst for 11 days.

When we got to town we were astonished to find Billy Graham there already. What in the world was the most famous Christian evangelist on the planet doing in the very belly of the beast?

The harsh religion of atheism was enforced in North Korea with a vigor hardly known anywhere else. Had Kim Il-Sung, we asked him, been persuaded to allow a crusade for Christ in Pyongyang?

Not quite, Mr. Graham said, flashing the broad smile that was part of his famous charm.

His wife, Ruth McCue Bell, the daughter of Presbyterian missionaries, had spent two years in North Korea as a schoolgirl early in World War II, and he explained that his visit, though laid on at the direction of "the Great Leader," was one with modest aims. "I wanted to thank North Korea, in her behalf, for their hospitality at a crucial and dangerous time in her life."

The Great Leader would allow no crusades, but the great evangelist would be allowed to preach twice, at two government chapels carefully tended by the government as "proof" that, atheist or not, the government was not afraid to allow their subjects to worship.

The Christian faith had once thrived in Korea, particularly in the north, introduced by missionaries. One chapel was built for Roman Catholics, the other for Protestants, who were usually Presbyterians and sometimes Baptists.

But that was a long time ago, and anyone practicing his faith in the early 21st century could expect official disapproval, pressure, or worse. So efficiently had freedom of speech been abolished, so the bitter joke went, that dogs that hadn't wound up on a dinner table had to swim the Yalu River to get into China just to bark.

The only radios allowed were government-issue, and permanently tuned only to the government station. Possessing any other was a crime punishable by death. Schoolchildren, we were told by Western diplomats in the capital, not only knew nothing about someone called "G od," but had never heard that man had walked on the moon.

How could a preacher, even one as eloquent as Billy Graham, have anything meaningful to say to such an audience so ignorant of the world outside? We listened to him preach first to the "Catholics" and then, after a ride across town to the second chapel, to the "Protestants."

Each congregation numbered about 200 well-dressed mostly men and a sprinkling of women, many looking as if chosen by Central Casting. Some of the Protestants were dead ringers for the Catholics we saw at the first service.

Mr. Graham was introduced by a man who said he was the pastor, and he sounded like the real McCoy. "The power of the Gospel is on fire," he said, "and we are here to listen to a man who is G od's messenger."

Not knowing who he was really speaking to, whether actors or authentic penitents, Mr. Graham spoke as if talking to Dick and Jane, but with no hint of condescension, explaining that G od was the unseen creator, tutor and ruler of the universe, that he had sent his son Jesus to live among us as an ordinary man, to die for the sins of men and women, was crucified, died, buried and was resurrected and returned to life for a short time, and would one day return again to reign over the earth. "Until then," he said, "live in peace with your neighbors, be good citizens, and know that G od loves you."

We sang the hymn familiar to Christians everywhere, "Amazing Grace, how sweet the sound, that saved a wretch like me; I once was lost, but now am found, was blind but now I see." We sang without hymnbooks, and everybody seemed to know the words. If they were ringers, they were well coached, and joined the singing with enthusiasm. Koreans, we saw (and heard), like to sing.

We returned to our hotel with our government "minders" and one of them, a voluble and dedicated Communist who had been with us for several days, eager to impress on us the Communist line, asked whether we had heard of "this Jesus." He was told yes, we had. "I want to think about this," he said. He seemed to want to be alone with his thoughts, and we rode the rest of the way home in silence.