Never a final curtain on the Mueller minstrels 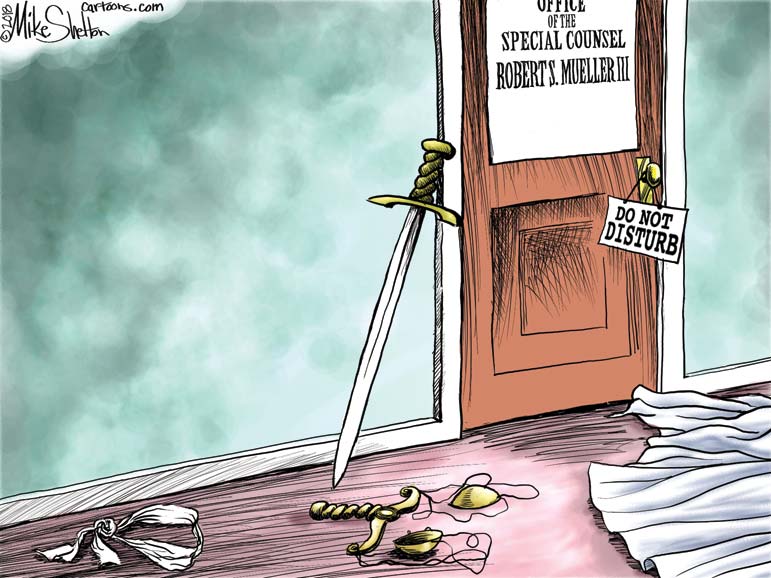 Robert Mueller is said to be hitting his old textbooks from law school, perhaps an early chapter on how to keep the clock running on a rich client. Lawyers charge by the hour and a clever Blackstone can keep the meter running until the 12th of Never.

A lot of Democrats are impatient to see what Mr. Mueller has learned about Russian interference in the 2016, particuÂ­larly Donald Trump's collusion with Vladimir Putin (if any) to cook the result. What they really want to know is when Mr. Mueller has scheduled the president's perp walk.

Many of these partisans thought putting the president in prison stripes would be a slam dunk. Surely depriving Hillary Clinton of returning to the White House, over which she presided with such serene grace, was a high crime and a low misdemeanor, and only children on Christmas Eve, with sugar plums dancing in their little heads, could understand the Democratic impatience.

But alas! A cloud of doubt no bigger than a child's hand keeps dancÂ­ing across the horizon. CNN News, counted on to buck up Democratic spirÂ­its when doubts and fears assail, reports that its ever-imaginative sources say Mr. Mueller is finished with his mighty task and will say so next week.

"The precise timing of the announcement is subject to change. The scope and contours of what [Attorney Gen. William] Barr will send to Congress remain unclear. Also unclear is how long it will take Justice Department officials to prepare what will be submitted to lawmakers."

James Clapper, who was Barack Obama's director of National Intelligence and a full-time tormentor of President Trump for these many months, now says he's not at all sure that Mr. Mueller will clear up questions about President Trump and the Russian collusion allegations.

"I think the hope is that the Mueller investigation will clear the air on this issue once and for all," he tells CNN, still trying to sound confident. "I'm really not sure it will, and the investigation when completed could turn out to be quite anti-climatic and not draw a conclusion about that."

What? No perp walk? Mr. Clapper, eager to refute White House speculation that the collusion talk was always a lot of clap manufactured by the media, turned to the innuendo and speculation of the spook trade to soften the impact of the intrusion of reality. "The strange thing I think that has bothered a lot of people both in and out of the intelligence community is this strange personal deference to Putin by the president. I've speculated in the past that the way Putin behaves is to treat President Trump as an asset."

This echoes the speculaÂ­tion of Andrew McCabe, the sacked and disÂ­graced director of the FBI, who said he thinks "it's possible" that Mr. Trump was and is a Russian asset. Mr. McCabe's claim to infamy is that he parÂ­ticipated in, and perhaps led, a coup d'etat to drive the presiÂ­dent from office. (Hillary would live again.)

Sen. Lindsay Graham of South Carolina, the chairman of the Senate Judiciary Committee, whose hair was set on fire by the revelation of the attempted coup, vows to get to the bottom of it. The senator seems most offended that senior federal law-enforcement officials would suggest that such third-world revenge for losing an election would be attempted in the United States — and that it created no substantial outrage in the capital. Once we were amused by coups in the third world, where mounting coups is the national pastime, like baseball in the United States, and now we emulate our little brothers in the nether regions of the planet.

Mr. McCabe seems most offended that the president would sack James Comey, once the director of the FBI, and a perpetrator in the deliberate destruction of what was once one of the most distinguished law-enforcement agencies anywhere. Mr. McCabe and his co-conspirators couldn't wait for an election and suitable revenge, which has always been the honorable method of changing presidents.

"The idea is," Mr. McCabe told CBS News interviewers, "if the president committed obstruction of justice, fired the director of the FBI to negatively impact or to shut down our investigation of Russia's malign activity and possibly in supÂ­port of his campaign, as a counter-intelligence investigator [and unsuccessful plotter of a coup], you have to ask yourÂ­self, â€˜Why would a president of the United States do that?'"

And why have so many sometimes-reasonable DemoÂ­crats succumbed to Derangement Syndrome? But they do, and there's no cure in sight. Neal Katyal, an acting soliciÂ­tor general for Barack Obama, says a brief Mueller report would not mark the beginning of the end of the epidemic, but only the end of the beginning. This meter may never stop running.