The snookered press at Pyeongchang 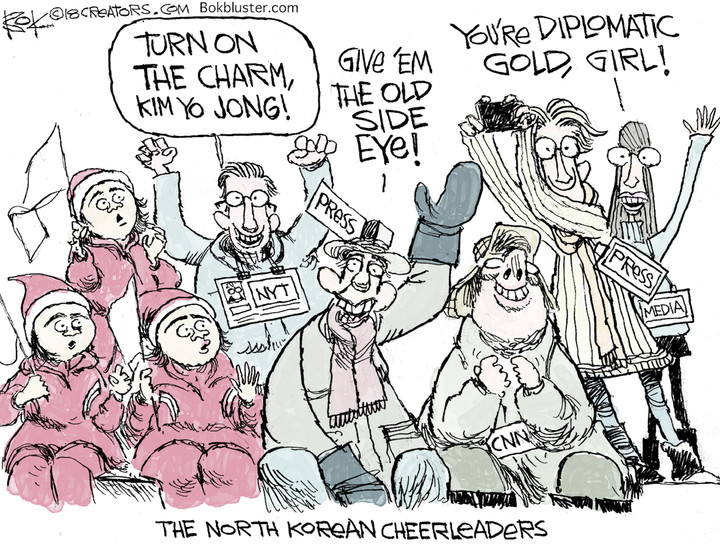 When Kim Jong-un dispatched his crack propaganda team to Pyeongchang (and not P.F. Chang, the Chinese restaurant, as reported by NBC News) to cover the Winter Olympics, he couldn't have imagined that the American media in town would have been so easy to con.

It was so easy, in fact, that a girl could do it, and she did. "If â€˜diplomatic dance' were an event at the Winter Olympics," CNN reported with gasps of breathless wonder, "Kim Jong-un's younger sister would be favored to win the gold."

"Without a word, and only flashing smiles," observed The New York Times, "Kim Jong-un's sister outflanked Vice President Mike Pence in diplomacy." The Washington Post and the BBC, the British radio and television network, compared Miss Kim to Ivanka Trump, the president's daughter. Reuters, the British news agency, did in fact award Miss Kim an "imaginary diplomacy gold medal" for her exploits, which was only right, because any difficulty in winning the gold was clearly imaginary.

And not just the easily conned media. Whoopi Goldberg, the distinguished foreign-policy analyst and sometime Hollywood actress and television panelist, scolded the vice president for being rude to Miss Kim when they sat only inches apart on the celebrity viewing stand at Pyeongchang, and he neither smiled nor nodded to her.

The veep's mere presence was a deliberate rebuke to Miss Kim, because his guest was the father of Otto Warmbier, the American college student who was sent to prison, tortured and destroyed for the prank of trying to take a propaganda poster home as a souvenir.

This was too much of a silly thing for cooler, saner heads. "Kim Jong-un's Sister is Not Your New Fave Shade Queen," chided BuzzFeed, the news website. "She's a Garbage Monster. What the hell is wrong with you people?" Sen. Cory Gardner of Colorado, a Republican, had a few particularly choice words for The New York Times: "Is the â€˜newspaper of record' really this susceptible to charm and propaganda from murderous dictatorships? Remember there are currently over a hundred thousand prisoners enslaved in North Korea."

The New York Times has experience with this sort of thing, having once won a Pulitzer Prize for sending Walter Duranty to Moscow to see what was going on in Russia, and he missed the famine Stalin exploited to kill millions of Ukrainians. If a newspaper can miss a famine that killed millions, it would miss a concentration camp with a hundred thousand starving prisoners.

Kim Yo-jong, 30, is not only a powerful member of her brother's "kitchen cabinet," CNN reported, but "with a smile, a handshake and a warm message in South Korea's presidential guest book, [she] has struck a chord with the public just one day into the Games." In fact, the Twisted Sister is by the American media's accounting, all heart. She wears designer clothes and looks as if she has not missed many trips to the dinner table, and she's willing to eat heartily and dress nicely as surrogate for the hungry, ragged North Korean masses who would enjoy eating a bite for themselves. How can such a woman be called cold, heartless and missing the sweeter things of human intercourse?

She's the director of the Propaganda and Agitation Department, which sounds harmless, but is in fact responsible for making sure that all North Koreans are properly indoctrinated in the absolute wonderfulness and supremacy of Kim Jong-un and his Workers Party. She does her job well.

The United Nations commission on human rights in North Korea concluded three years ago that "there is almost a complete denial of the right of freedom of thought, conscience and religion." This normalization of brute evil is enforced by prison, torture and execution. The U.N., against all expectations, found that Miss Kim and her brother carry out crimes against humanity "that does not have any parallel in the contemporary world."

Miss Kim's death-by-starvation department is key to enforcing Kim family rule. If anyone were free to leave North Korea, the rush would resemble a stampede on the Chisholm Trail. But the intelligence agencies do not expect many, if any, defections by any of the hundreds of North Koreans at the Winter Olympics. The North Koreans know that if someone defects, his entire family â€” sisters, brothers, cousins and aunts â€” will pay the price. This would apply even to Miss Kim. Her brother is not a family man.

"With her freckles and enigmatic smile," Claudia Rosett, a foreign-policy fellow at the Independent Women's Forum, writes in The Wall Street Journal that "Miss Kim is a trained and trusted royal brainwasher for a family regime whose court is built on totalitarian lies. Her admirers in the [American] media ought to be impressed by the professionalism with which she snookered them." It wasn't even hard to do.