Second thoughts in the Unicorn Caucus 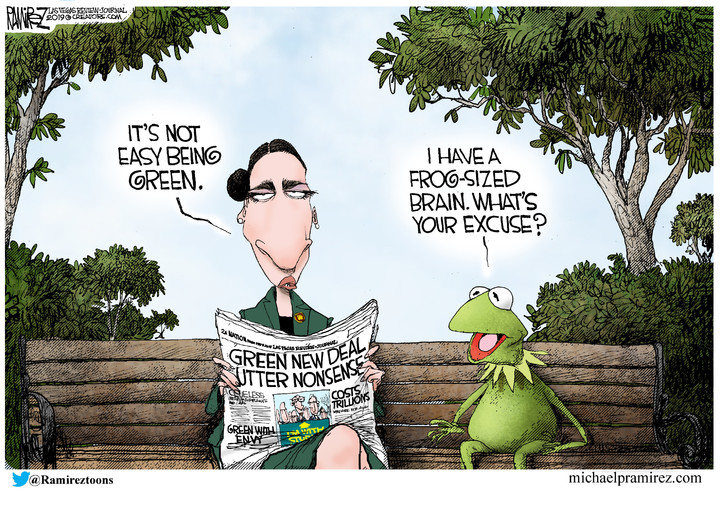 There's a barroom in the Bronx missing a serving wench. She went off to Congress to enact into law all the imaginative ideas she heard while serving up suds to the noisy know-it-alls at the bar.

That's the only explanation for the Green New Deal, so called, the scheme birthed by Alexandria Ocasio-Cortez to repeal nearly everything anyone knows about economics, politics and flatulence.

Among other things, she prescribes "a massive transformation of our society," which would require upgrading or replacing every house and building in the United States "for state of the art energy efficiency," a 10-year plan to ban nuclear energy and fossil fuels, eliminating air travel, crossing rivers and oceans with high-speed rail to everywhere, making sure that all new jobs are "union jobs" and to abandon technology as a way to eliminate excessive carbon in the atmosphere.

Everyone "unwilling" to get a job would get a government check.

Perhaps most ambitious of all, the Green New Deal would resolve, once and for all, the problem that has vexed milkmaids for centuries, ill-mannered cows that fart any time they feel like it, sending methane gas into the atmosphere and entertaining nobody but little boys.

She concedes that she doesn't have the foggiest idea of what such a scheme would cost, but just repairing, upgrading or replacing every building in the 50 states (territories would come later) "would cost $4.6 trillion at minimum."

That's probably more than his divorce will cost Jeff Bezos, who unlike Congress can just add another nickel to the newsstand price of The Washington Post.

The early applause for her Green New Deal was so tepid that the Deal was quickly disowned and her office, which even suggested that the whole thing was a hoax, probably written by Republicans. Nobody else would be so dumb as to deliberately trot out a fantasy about taking the night train to London.

Even though she couldn't say what her scheme would cost she speculated that the Federal Reserve has lots of dollars and maybe they could finance it. "The question isn't how will we pay for it," she said, "but what will we do with our new shared prosperity?"

If it was all a hoax, the farting cows were off the hook again, and could resume making milkmaids miserable. There would be no relief in the barn, after all. Over the next day or so the imaginative Ocasio-Cortez staff would make more changes to her story than Ralph Northam made to his.

All this left the 67 congressional Democrats, including five adult Democratic senators who had endorsed sight unseen the Green New Deal, out on a limb, with their faces smeared with green egg. Five of those senators are among the multitude of Democrats who are, or are suspected of, running for president in 2020.

Cory Booker, Kamala Harris, Kirsten Gillibrand and Pocahontas put their arms around the Green New Deal and squeezed tight. Bernie Sanders, huffing and puffing just to stay up with the ladies, says the Green New Deal, farting cows or not, is just the ticket to solve the problem of global warming, or climate change, and sure enough the weather was changing.

Balmy, sunny days in the nation's capital gave way to all-day rain and even a little more snow.

These are not happy days for Democrats, proving once more that nothing recedes like success. The suicide of the party quickens. Rep. Ilhan Omar, the newly elected congressperson in Minnesota and a fierce supporter of the campaign to boycott, sanction and pull investments from Israel, accused Jews of being obsessed only with money and of showing more loyalty to a foreign country — i.e., Israel — than to their own. It was a familiar canard, demonstrating again how friendly the party has become to purveyors of anti-Semitic poison.

The minstrels, meanwhile, continue to hold Virginia, with no sign of losing their grip on top offices. Calls for the governor to resign are beginning to fade, now that it's clear the price of doing the right thing would be turning Virginia over to a Republican governor.

Mr. Northam has embarked on a campaign to purge white privilege from the Old Dominion (but not his own). He looks like surviving, but the man with a tighter lock on survival is Justin Fairfax, the lieutenant governor, accused by two women of pitching violent woo they didn't order. He has the good fortune of being black, and as long as the white boys survive there's no way Democrats will make Justin Fairfax to walk the plank.

Virginia has a better minstrel show than Lew Dockstader or E.P. Christy ever blacked their faces for. Gentlemen, be seated.