The long, painful slide down the slippery slope 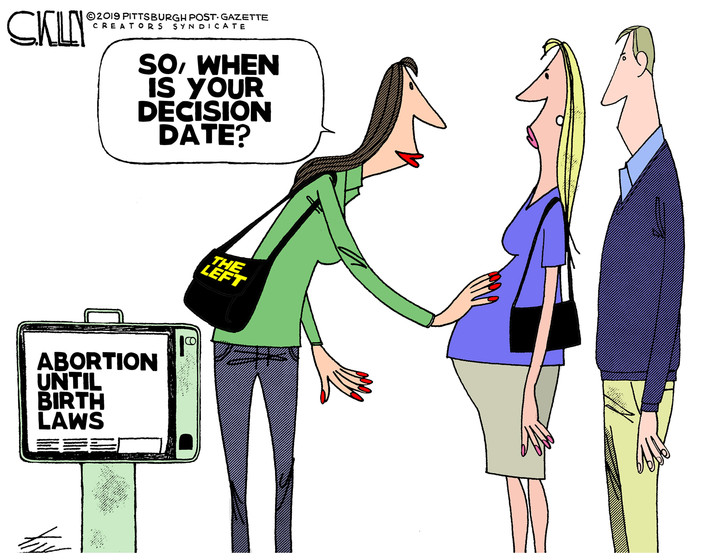 We're not any longer talking about abortion, the issue that has bitterly divided us for decades.

Anything said about abortion is controversial in the present (and permanent) atmosphere. It's the match struck in a gasoline refinery. Such carnage wrought would be an accident, horrific and deadly. But only manslaughter, not planned and premeditated murder.

This week a member of the Virginia House of Delegates, one Kathy Tran, a Democrat from Fairfax County, introduced a prospective law that would permit abortions through all 40 weeks of a human pregnancy, up to and including the moment of birth and a physician's slap across the baby's bottom. And, incredibly, perhaps even beyond that.

This has set off a revival of the rage over abortion, and demonstrates just how far the abortion lobby has expanded the Roe v. Wade definition of what the U.S. Supreme Court said was a woman's constitutional right to an abortion. Slippery slope, indeed.

Within hours the renewal of the debate moved from the Virginia legislature to the U.S. Senate, where Sen. Ben Sasse, a Republican from Nebraska, asked the senators to approve his Born-Alive Abortion Survivors Protection Act, which would presumably prevent infants from being born alive and having to pay the ultimate price for it.

When Mrs. Tran's colleagues heard the text of the proposed legislation, some of them were astonished by what they thought they had heard. "Where it is obvious a woman is about to give birth, that she has physical signs that she is about to give birth," asked Delegate Todd Gilbert, "would that still be a point at which she could request an abortion if she were so certified? She's dilating."

Replied Mrs. Tran: "My bill would allow that."

If that were not explosive enough, Ralph Northam, the Democratic governor who was eager to reassure feminists who regard abortion as a holy rite of passage, leaped to defend the legislation in an interview with Washington's Radio Station WTOP.

That's when hell — holy hell, one might say — broke loose. Mr. Northam invoked the old standby of someone caught running his mouth without a governor on his tongue, saying his remark was "taken out of context," and attacked the motives of everyone outraged. Politicians with and without convictions should be more careful with the language. The governor's remark was plain enough for everyone, and the context was clear enough.

The governor was not talking about a fetus, but a new human being, with all the constitutional, ethical and moral rights of everybody else, even a governor. The infant would be kept comfortable,

Mr. Northam said, and that was right generous of him, and "resuscitated if that's what the mother and family desired, and then a discussion would ensue between the physician and the mother." But the physician and even the mother no longer have anything to say about whether a living, breathing human can be put to death for the sake of convenience. A healthy infant — "not just a fetus" — in these circumstances is entitled to an advocate to be in on the discussion over whether its mother and the physician decide to put it to death.

"This is morally repugnant," Sen. Sasse said in reply on hearing the remark the governor would no doubt like to have back for a minute or two, at least to refine it. "In just a few years abortion zealots went from 'safe, legal and rare' to keep the newborns 'comfortable' while the doctor debates infanticide. I don't care what party you're from — if you can't say it's wrong to leave babies to die after birth, get the hell out of public office."

The abortion debate has become driven by politics, seen driven by rage and anger, and that's too bad for everybody. If abortion is ever again illegal, as Democrats fear, they will have only themselves to blame. They and their radical-feminist allies have given no quarter in the debate, defending the indefensible — the brutal abortionist, partial-birth abortion and making the government pay for abortions.

We aren't the nation we used to be, but killing people, even newborn infants, is still likely to be a hard sell in America.