This president is different 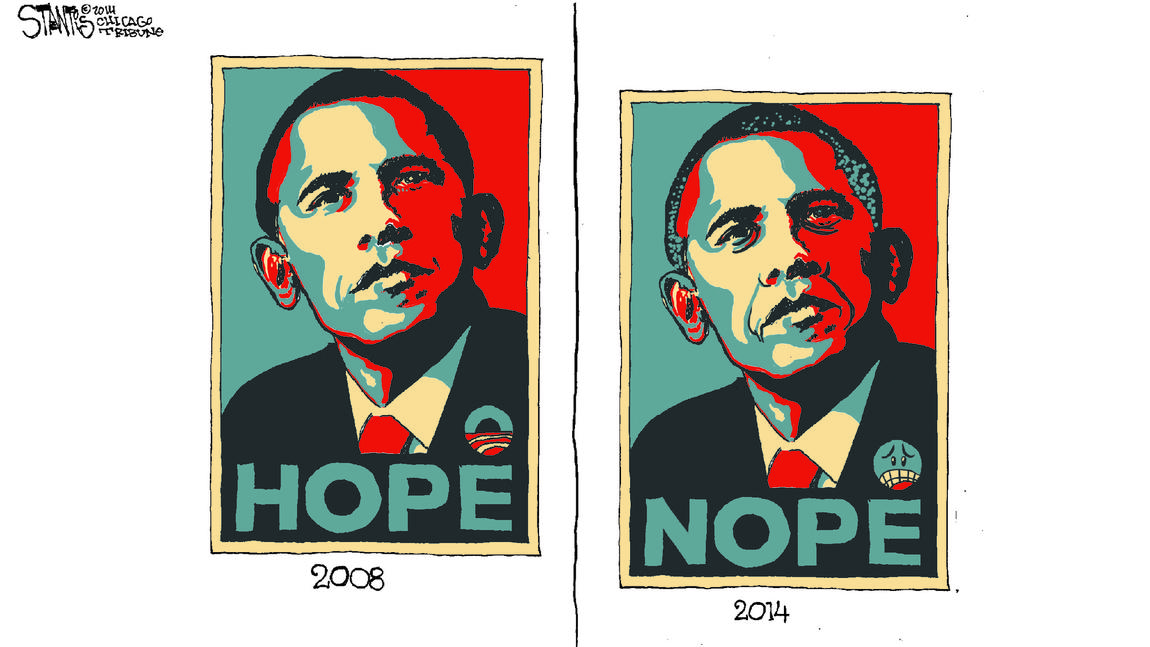 It's happened to presidents of before as they found themselves (a) entering their sixth year in office, and (b) increasingly irrelevant. The current occupant of has just been presented with an impressive vote of confidence -- in the opposition. Midterm elections will happen.

But strong presidents don't let the well-known six-year blues bother them. They don't need validation; they know who they are, where they stand, and they just keep on keeping on. They have an identity, they've earned it over the years, and they're not about to bargain it away for a brief boost in the always evanescent polls.

The country doesn't need a president who's popular, just one who's right. Even if it may take the long perspective of history to prove it.

, the man from Independence. Now that he's been promoted to one of the greats or near-greats in those ever fickle presidential ratings by historians, which are even less reliable than the daily polls, it may be forgotten how unpopular he was when he left office in early 1953 -- though unpopular would be a vast underestimate, Widely despised might be more like it. Not that his standings in the polls ever bothered a feisty type like Mr. Truman; he just kept giving 'em hell.

Or consider the presidency of his successor, one . By the time his two terms were open, the sophisticated had dismissed him long before as a harmless old duffer who was just holding up progress. The more fashionable could hardly wait till the Kennedys and their court took over and gave the place some class, you know, made it more ... French. Out would go stodgy old ideas like balanced budgets and paying off the national debt. In would come Camelot!

Ike may have been snubbed by the country's bien pensant but he remained Ike. Complete with that broad grin and the reservoir of good will he'd earned as a solider and, as it turned out, statesman. Yes, he did speak a language of his own at press conferences, a mysterious tongue of vague origin and indeterminate meaning. He had learned before that mystification has its uses, and ambiguity can be an effective policy Much like his foreign policy, his vague pronouncements ("What do you think he meant by that?") may have been just another way to keep the peace. Which he did. It took , that smart liberal columnist, years to figure out that the 34th president of was "inarticulate like a fox."

Decades later, the country would get a president with a real gift for gab -- -- and he, too, would suffer reverses. "Mistakes were made," as he would say. He, too, would be dismissed as "an amiable dunce" by the likes of Democratic operatives like , but he was smart enough to end the Cold War -- and the with it. Not bad for an amiable dunce.

Nor could be described as popular when he left the . Bush 43 wasn't just despised in some quarters but actively hated. His response: None. He just kept on doing what he thought was right at the time -- and the success of the Surge in proved that on occasion he was.

Whatever their differences, all those presidents had one thing in common: They never lost their interest for Americans. We the People never stopped taking noticing of them, if only to hoot at their foibles. Whether you were applauding or just being appalled, you paid attention when they spoke. No one was neutral about them.

This president is different. When he speaks these days, it's as if he were reporting the doings of an administration that only coincidentally happens to be his own. He's our bystander-in-chief, and as his tenure begins to fade, he's gone from being Mister Cool to Mister Irrelevant. Have you noticed? The sound of his voice no longer attracts, or even repels. It's just there. Like fading wallpaper, it has become just another part of the unnoticed background as it goes on and on about. ... I can't remember offhand. His press conference, the one the day after that dramatic defeat of his party in the midterms, there was nothing dramatic about what he said. I thought I listened to every word. I just can't remember a single one of them. He just went on an on about ... nothing in particular. The bully pulpit of the presidency might as well be unoccupied. Maybe it is.

("All of us have to give more Americans a reason to feel like the ground is stable beneath their feet, that the future is secure, that there is a path for young people to succeed, and that folks here in are concerned about them. So, I plan on spending every moment of the next two-plus years doing my job the best I can to keep this country safe and to make sure that more Americans share in its prosperity....") Yes, and The Future Lies Ahead. Are you still awake, Gentle Reader?

Like so much of the American public, seems to have lost interest in . So much so that not even he may have noticed. Or he would say something, not just speak. But there doesn't seem to be any there there, just an endless hum emanating from some appliance that's been left on somewhere in the house, but just where or why isn't clear. Not that anybody cares anymore. Interest fades.

Paul Greenberg is the Pulitzer-winning editorial page editor of the Arkansas Democrat-Gazette.