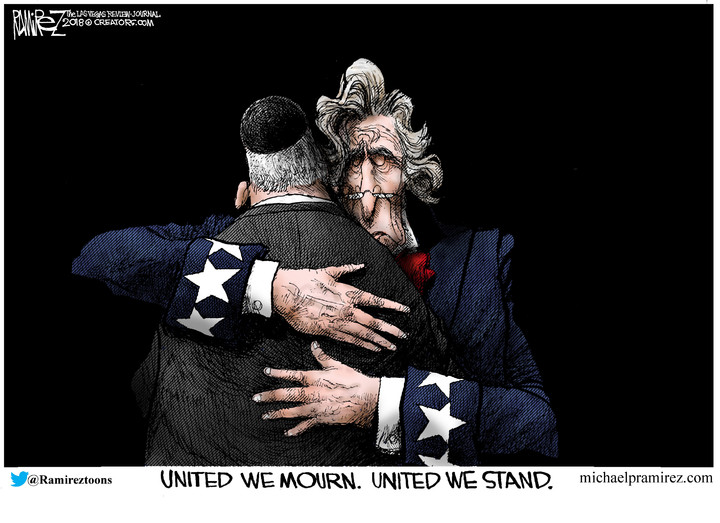 "In the middle of the twentieth century, in the heart of civilized Europe, a massive enterprise was manufacturing death on a large scale," writes Eli Wiesel, a Holocaust survivor and Nobel Peace Prize winner. "Was the free world aware of what was going on? Surely not. Otherwise it would have done something to prevent such a massacre. That was the consoling thought the prisoners clung to in order to protect their unwavering faith in humanity," writes Wiesel, describing the arrival of Hungarian Jews at Auschwitz in May 1944. "Had they heard that all the details and all the aspects of the 'Final Solution' were known to the White House," he says, "they would have sunk into despair and resignation. But they discovered the truth only after the war."

In his 1985 book, "The Abandonment of the Jews," author David S. Wyman documents chapter and verse how America did not live up to the faith in humanity that the Hungarian Jews expected.

It's shocking to see that in black and white even today when the revelations have been known for decades. It's shocking because it reminds us how various leaders, policy makers and the media offered all manner of political and personal reasons for looking away as the Nazis developed the "Final Solution." Had the Europeans acted, they might not have prevented that "solution," but they might have saved millions of Jewish lives.

We're not talking about the indifference of bad people, evil leaders or dedicated anti-Semites, but passive anti-Semitism and a callous complacency. What makes this especially relevant now is not the history of the Holocaust, which most of us know, but the insights into the thinking of ordinary and influential people who knew what was happening but did not listen to their better angels.


We must consider the rhetoric served up since the murder of nearly a dozen Jews in a synagogue by a rabid anti-Semite who screamed "All Jews must die!" Critics blame hateful internet rhetoric and over-the-top talk by politicians, including the president, for making this particular massacre possible. But that's wrong.

The shooting at the Tree of Life synagogue in Pittsburgh was committed by a declared anti-Semite with a longstanding hatred of Jews. Anti-Semitism is not a partisan crime, and it shouldn't be used to make political points blurred by identity politics and hatred of the president.

We have nothing close in our country to the anti-Semitism once rampant on the European continent, where armed guards are still needed to protect certain synagogues, but the number of anti-Semitic incidents recorded here was up 57 percent in 2017 over the previous year, according to the Anti-Defamation League. It's important to the memory of the dead to be vigilant and to not forget history.

Fighting anti-Semitism is important, but so is keeping straw men out of that struggle. George Soros is Jewish, and Republicans criticize him for using his abundant wealth to promote Democrats and their left-wing causes. That doesn't make his critics anti-Semites. When House Majority Leader Kevin McCarthy lumped Soros, Michael Bloomberg and Tom Steyer together as big Democratic donors and tweeted, "We cannot allow (them) to buy this election," The New York Times suggested that the tweet smacked of something that could incite anti-Semitism. The newspaper made a correction, sort of, noting that Steyer is an Episcopalian of Jewish descent.


Donald Trump is not an anti-Semite. He says rude things, and he was wrong not to call out at once the white supremacists who marched in Charlottesville with swastikas, but it's also right to recall that the president, a Presbyterian, embraced his daughter's conversion to orthodox Judaism and has been a better friend of Israel than many liberal Democrats. No one talked about "fake news" during World War II, but they might have talked about "buried news," where stories about the gathering storm of the Holocaust were often understated or obscured.

Franklin Roosevelt didn't want to be seen as too close to the Jews, lest it antagonize many of his supporters, whom he knew were passive anti-Semites. His State Department was notoriously anti-Semitic and found reasons to refuse or delay helping European Jews fleeing their doom.

The dominant media of that day treated news of Jewish persecution as if it were of minor consequence. The New York Times, though Jewish-owned, didn't want to seem "too Jewy," so it avoided mentioning the connection when it could, as if it were a family shame. It once placed a revelation of the murder of 400,000 Hungarian Jews on Page 12.

Jews have a gift for dealing with pain with bitter humor. You can hear it in Tevye's lament in "Fiddler on the Roof," crying out to G od: "I know. I know. We are Your chosen people. But once in a while, can't You choose someone else?"