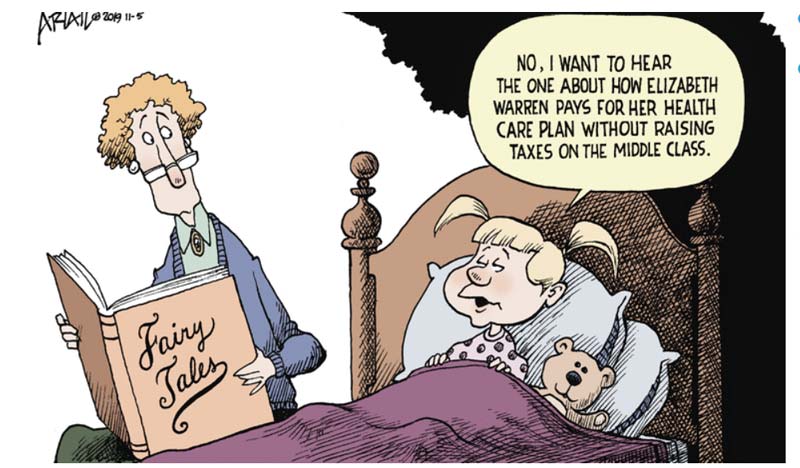 Unlike Sanders, however, Warren claims she can finance her plan by raising taxes only on the superrich. The middle class, Warren insists, will see their health care costs go down and their taxes will not go up.

Some of her nearly equally left-wing rivals demanded specifics. Who pays? And how much? After a Democratic debate, one rival, Mayor Pete Buttigieg of South Bend, Indiana, said Warren was "more specific and forthcoming about the number of selfies she's taken" than about her plan.

Buttigieg said: "Not only is it important to have 'yes-or-no' answers to 'yes-or-no' questions at a time when people are so frustrated with Washington-speak, but also there's still been no explanation for a multitrillion-dollar hole in this plan."

Not that Democrats and their media sympathizers truly care about costs or whether promises about costs are even kept. President Barack Obama made numerous unrealized promises about his health care plan. He insisted Obamacare would save the average family $2,500 a year, that it would "bend the cost curve" downward and that people could keep their health care plan if they wanted to.

PolitiFact pronounced Obama's "if you like your health care plan, you can keep it" promise 2013's "Lie of the Year."

Democrats, of course, quickly employed their fallback position on rising costs: blame Republicans. Sally Pipes of the Pacific Research Institute, a conservative think tank, said last year: "Despite the fact that premiums rose throughout President Barack Obama's second term, Democrats claim that the most recent rate increases are President Donald Trump's fault. In August, four liberal cities -- Baltimore, Chicago, Columbus and Cincinnati -- filed a lawsuit alleging that Trump is 'waging a relentless campaign to sabotage and, ultimately, to nullify the law.' That's nonsense. Obamacare is imploding under the weight of its own regulations."

A month before Warren finally revealed the cost of her plan, the Urban Institute, a center-left think tank, estimated the cost of a single-payer plan for everyone, including illegal aliens, at $34 trillion "in additional federal spending" over 10 years. Other conservative groups, like the Heritage Foundation, put the price almost as high.

The American Enterprise Institute warns that these cost estimates don't consider the number of health care-related jobs that will be lost.

According to a recent article in The Washington Post, some economists estimate the number of jobs lost at 2 million.

About Medicare for All's price tag, the center-left Atlantic magazine said: "That's more than the federal government's total cost over the coming decade for Social Security, Medicare, and Medicaid combined, according to the most recent Congressional Budget Office projections. ... Over the next decade, the plan on its own would represent a nearly 60 percent increase in total expected federal spending, from national defense to interest on the national debt."

Under pressure, Warren recently revealed the cost of her plan: $52 trillion over 10 years, including $20.5 trillion in new federal spending. About Warren's plan and her promise not to raise taxes on the middle class, the executive vice president of Third Way, a "centrist" Democratic organization, said: "The gap between what she says it will cost and what it will really cost is in the trillions of dollars, and the middle class will be on the hook to fill that gap. My guess is that with accurate numbers, she's somewhere between $5 trillion and $10 trillion short. (Her plan taps) the rich and corporations as much as possible. Who's left? The middle class."

The Kaiser Family Foundation executive vice president for health policy told The Atlantic: "The only way to make that math add up is to pay doctors and hospitals and drug companies a lot less, as Warren has proposed.

The fundamental question here is: Can you lower health-care prices enough to offset the increased costs from universal coverage and very comprehensive benefits?"

The answer to that question is an unequivocal yes, provided one doesn't care who pays, how much or whether a Medicare for All plan can actually achieve its objectives of insuring everyone for less money while maintaining quality.

To Democrats, this isn't even a heavy lift. They believe there is such thing as a free lunch and the Republicans are stopping them from eating it.