AOC Got a Pass on the Cost of 'Free' 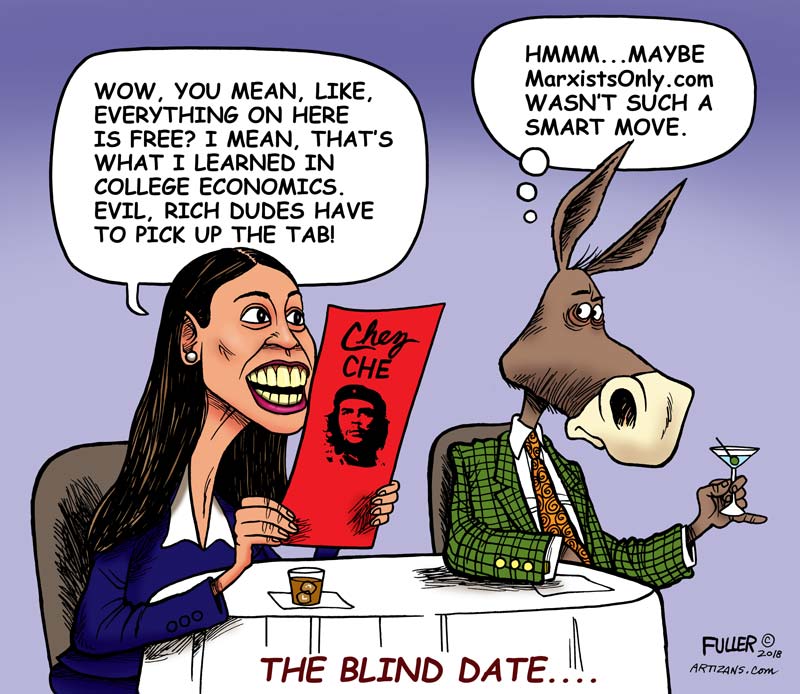 ABC's Jonathan Karl recently interviewed Rep. Alexandria Ocasio-Cortez, D-N.Y. Karl asked no question and did not call for a clarification when Ocasio-Cortez, presumably referring to the Mueller report, spoke about "the abundance of evidence, 10 counts of obstruction of justice, four with rock-solid evidence" against President Donald Trump.

A "count" means a specific accusation of a crime. The Mueller report made no such accusation.

Even worse, Karl, with not one follow-up question, allowed Ocasio-Cortez to rattle off her progressive agenda — which includes free college tuition, government health care for all and a $15 minimum wage indexed to inflation.

After Karl's AOC interview, studio panelist and former New Jersey Gov. Chris Christie pointed out that AOC's programs "cost trillions of dollars" and Karl "did not ask" about the programs' price tag nor whom she expects to pay for it.

So let's examine the cost of "free" college and debt forgiveness.

About Sen. Bernie Sanders' "College for All Act," the Vermont independent's office said the act would "eliminate tuition and fees at four-year public colleges and universities for families making up to $125,000 — about 80% of the population — and make community college tuition- and fee-free for all." Sanders said, "If we are to succeed in a highly competitive global economy and have the best-educated workforce in the world, public colleges and universities must become tuition-free for working families and we must substantially reduce student debt." But what about the price tag?

So what is the price tag for "free" college and the elimination of college debt?

The conservative Heritage Foundation said in 2017: "High college costs exacerbated by overgenerous federal lending policies have encouraged more students to take on high levels of student loan debt. As a result, graduates often leave college unprepared to pursue their career and life goals and are saddled with a debt burden that limits their upward mobility.

There was a time when a small amount of savings and a part-time job could get students through college with little or no debt. But today, more students than ever are turning to federal loans to finance their college education." In short, federal money incentivizes colleges to increase tuition. More federal money would simply increase that incentive.

Neal McClusky is the director of the Cato Institute's Center for Educational Freedom. "'Free' would have to be paid for with tax dollars," McClusky wrote, "and looking at colleges' current tuition and fee revenue, and income directly from government, gives a rough sense of how much it would cost. Using the most recent federal data, it comes to roughly $339 billion annually, or about $1,360 for every adult in the United States. If you live to age 75 and pay that annually in taxes starting at age 18, that's $77,500 — not free at all."

What is the price tag for college debt forgiveness? A lot. According the American Enterprise Institute's Frederick Hess: "(Warren's) proposal is projected to cost $640 billion, though some estimates suggest the figure could be north of $900 billion.

As one might expect, Warren's proposal disproportionately benefits affluent families, since working class and low-income households are much less likely to have attended college at all — much less to have racked up substantial student debt."

Finally, the left-wing Brookings Institute questions whether student loan debt is a truly a "crisis" at all, let alone one that necessitates debt forgiveness. In a 2014 article called "Is A Student Debt Crisis on the Horizon?"

Brookings co-writers Beth Akers and Matthew M. Chingos say the answer is "no." Brookings' summary of their report says: "Although the data analyzed confirm significant increases in average debt levels, they provide little indication of a significant contingent of borrowers with enormous debt loads.

In 2010, only two percent of young households owed more than $100,000 on their student loans. Ultimately, Akers and Chingos conclude that typical borrowers are no worse off now than they were a generation ago, and also suggest that the borrowers struggling with high debt loads frequently featured in media coverage may not be part of a new or growing phenomenon."

When one asks, "Who pays, how much will it cost, and will it achieve its objective?" most governments schemes fall apart. Free college tuition and debt forgiveness do, too.