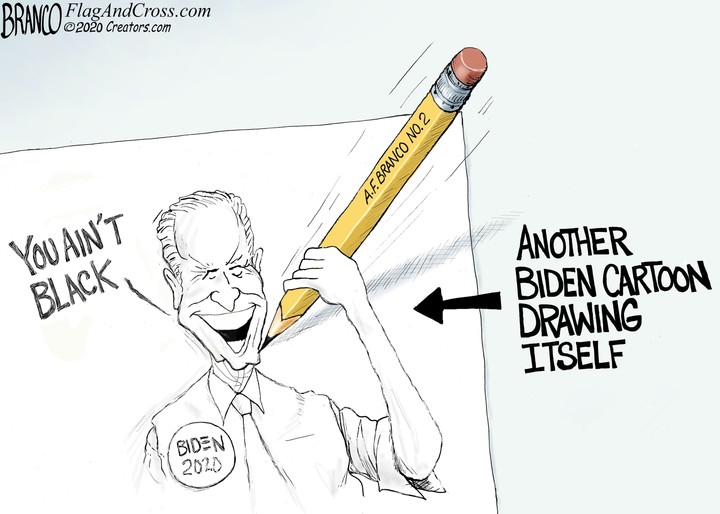 June 19 is the premiere of "Uncle Tom," a documentary on which I am the executive producer. Through interviews with black conservatives, some well-known and some not, the film asks a simple question: Why are independent-thinking blacks, who believe in limited government and personal responsibility, denounced as "sellouts" and "coons" and "Uncle Toms" by fellow blacks?

One can agree or disagree about whether, and to what degree, today's problems in the black community can be traced to slavery and Jim Crow. But blacks who do not connect the serious problems in black urban America to Jim Crow and slavery are dismissed as "self-loathing." They are attacked, rarely with data, while having their character and very humanity questioned. Believing that fatherless homes, poor urban education and urban crime have less to do with the past and much more to do with the modern welfare state does not induce a healthy debate. It sparks anger and derision.

Joe Biden: "You got more questions but I tell ya, if you have a problem figuring out whether you're for me or Trump, then you ain't black."

Charlamagne tha G od: "It don't have nothing to do with Trump. It has to do with the fact I want something for my community. I would love to see — "

Biden: "Take a look at my record, man. I extended the voting rights 25 years. I have a record that is second to none. The NAACP has endorsed me every time I've run."

After Biden's claim that the "NAACP has endorsed me every time I've run," the president of the NAACP issued this statement: "We want to clarify that the NAACP is a non-partisan organization and does not endorse candidates for political office at any level."

But what made the interview newsworthy was Biden's characterization that if a black person has a "problem figuring out whether you're for me or Trump, then you ain't black." Later that same day, he called his remarks "really unfortunate." "I shouldn't have been so cavalier in responding," said Biden.

"No one should have to vote for any party based on their race or religion or background."

But why does Biden call his comment "unfortunate"? Democrat Identity Politics 101 dictate that Republican blacks lose their blackness, Republican women lose their gender and Republican Latinos cease being Latinos.

In 1993, feminist Gloria Steinem referred to Republican U.S. Senate candidate Kay Bailey Hutchison as a "female impersonator." In 1996, Californians voted to amend their state constitution to bar the use of race, ethnicity or gender in government hiring, government awarding of contracts and admission into public colleges and universities. No more affirmative action.

University of California Regent Ward Connerly, the owner of a land-use planning company, led the fight for the ban even though, as a black man, he stood to benefit from contracts awarded on a race basis. He also happened to have a white wife. A Connerly opponent, black California lawmaker Diane Watson, later elected to the U.S. House of Representatives, said: "He's married to a white woman. He wants to be white. He wants a colorless society. He has no ethnic pride. He doesn't want to be black." Watson never apologized. In 2010, Senate Majority Leader Harry Reid said, "I don't know how anyone of Hispanic heritage could be a Republican, OK. Do I need to say more?"


In 2017, left-wing black commentator Marc Lamont Hill complained about the blacks present that President-elect Donald Trump chose to meet with. Hill said, "(It) was a bunch of mediocre Negroes being dragged in front of TV as a photo op for Donald Trump's exploitative campaign against black people." Last year, at the left-wing Netroots Nation conference, Rep. Ayanna Pressley, D-Mass., said, "We don't need any more brown faces that don't want to be a brown voice." She added, "We don't need any more black faces that don't want to be a black voice."

Neither Biden nor Pressley see the irony in calling people insufficiently black when that very slander was used against their beloved Barack Obama. In 2000, Obama lost a U.S. House race against Rep. Bobby Rush, a former Black Panther, who portrayed Obama as an out-of-touch, Hawaiian-born, Harvard-educated Uncle Tom.

An exasperated Obama said, "When Congressman Rush and his allies attack me for going to Harvard and teaching at the University of Chicago, they're sending a signal to black kids that if you're well-educated, somehow you're not 'keeping it real.'"

Later, Obama would say: "There's no one way to be black. Take it from somebody who's seen both sides of debate about whether I'm black enough." Somebody tell Pressley and Biden.

Is Obama going to comment on Biden's "you ain't black" assertion? Maybe, on June 19, the Obamas and the Bidens can see "Uncle Tom" together and compare notes.