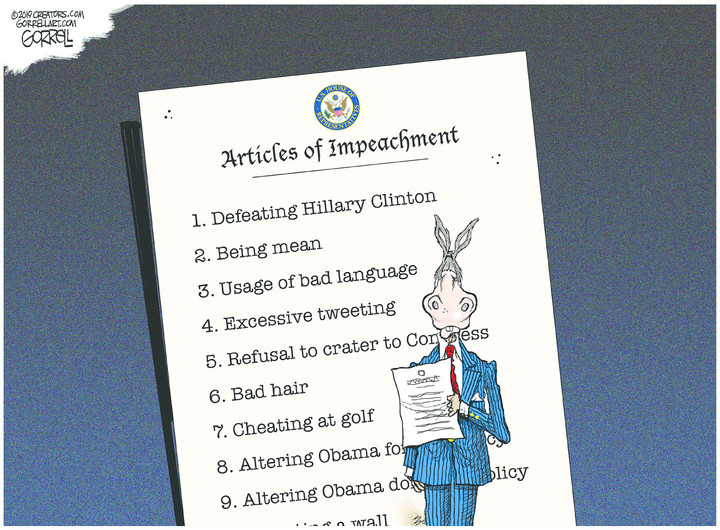 Pathetic Democrats. They want to destroy President Trump in the worst way, and it looks like they've found it.

It's the worst way to hold an impeachment, that's for sure. You see, they can't find any real reason to impeach him. But that doesn't matter. They are going ahead with a full House vote next week on impeachment because of . . . wait for it . . . abuse of power and obstruction of Congress. That's it.

Not collusion with Russia, which is what they originally wanted. Not bribery like they threatened, not "quid, pro quo" like they hoped. They have to settle for the nebulous terms of abuse of power and obstruction of Congress.

So what exactly do those terms mean? Nothing. They mean nothing. "He betrayed the nation," they whine. In what specific way did Donald Trump "betray the nation?" What crime did he commit? They won't say. "He is a threat to national security and to the Constitution," they cry. But they don't tell you how. They can't be specific because the man has done nothing impeachable.

But that doesn't stop the Democrat hate train. They get out in front of the cameras and microphones and harrumph to their complicit media friends about how bad President Trump is. Their impeachment charges have about as much validity and heft as a spoiled little kid screaming at her mother, "I hate you! You never let me have any fun!"

I watched Nancy Pelosi, Adam Shiff, Jerroid Nadler, and Maxine Waters standing in a line making the impeachment announcement. What a quartet. Talk about scary people. It's like the Wicked Witch of the West, Peter Lorrie, Ebenezer Scrooge, and Baby Jane all coming after you. They look like something you might see in a wax museum chamber of horrors.

Nancy Pelosi has spent more time with plastic surgeons than she has in Congress. Her face is stretched tighter than the elastic on Michael Moore's underpants. Adam Shiff is so spooky he reminds me of that guy on the Edvard Munch painting, "The Scream." Jerry Nadler is like an old version of Jabba the Hutt. And Maxine Waters is the scariest one of all, she looks like Maxine Waters.

But much more than butt ugly, these people look so angry, so unhappy, and just plain miserable. You wouldn't want to walk on their lawns. Can't you see them running out of their house screaming, "Hey, hey you! Get off my property! Get off or I'll call the cops!"

The real reason for the Dems pushing impeachment is an attempt to sway American sentiment against President Trump. They know they can't get rid of him through the impeachment process because the Senate will never vote to remove the president. The only way Democrats can oust Trump is to win the 2020 election and they know damn well that they can't win based on the line-up of candidates they have.

The only chance they have is to keep their cohorts in the mainstream media harping on how awful President Trump is. He's the worst president this country has ever had. He's the most dishonest. He's the biggest crook. He is destroying the Constitution. He is a traitor. He is a misogynist. He hates gays. He hates foreigners. He wants to keep children in cages. He cheats on his taxes. He says nasty things to people on Twitter. He is bad. He is bad. He is bad.

The fact is President Trump has produced amazing results in the past three years, even considering all the roadblocks his enemies have thrown in his way.


President Trump has produced a robust economy, with more people working than ever before, the stock market has made enormous gains, he has made great judicial appointments, done wonderful things for our vets, repealed manufacturing regulations so that businesses can prosper again, made it easier for small business to hire more employees, and, unlike just about every president in recent memory, he has actually kept his campaign promises.

And now for the biggest win of all! President Trump's approval among black voters is at over 34%! That's right, according to two separate and highly respected polls, Rasmussen and Emerson, more black voters are moving in Trump's direction. This rise in black support for a Republican president is understandable when you consider President Trump has done more for the economic welfare of African-Americans than any Democrat president.

This is a nightmare for Democrats who have spent generations convincing blacks to vote Democrat. If this trend continues in the election of 2020, it could spell the end of the Democratic Party once and for all.

Democrats are sweating it. They've shot their best shot and they've got to know by now that they look like fools to most of America. Pathetic? That word doesn't come close to describing what the Democrat Party has become.