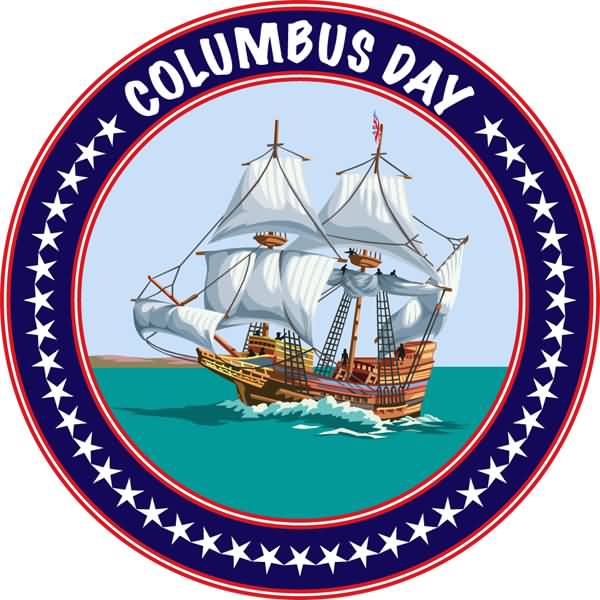 In fourteen hundred ninety-two
Columbus sailed the ocean blue.
He had three ships and left from Spain;
He sailed through sunshine, wind and rain.

That little children's poem actually goes on a bit longer, but the first two lines were the only ones I could ever remember. This is how we were introduced to Christopher Columbus in grade school.

October 12 was the traditional date that we celebrated Columbus Day, now it's the second Monday of October.

Columbus Day was established as a national holiday commemorating the anniversary of Christopher Columbus's arrival in the Americas on October 12, 1492. Students of my generation were taught that Columbus was an Italian explorer who set sail across the Atlantic Ocean in search of a faster route to the Far East only to land at the New World.

Sponsored by the Queen of Spain, his first voyage to the New World via the ships the Nina, the Pinta, and the Santa Maria took approximately three months.

Columbus and his crew's arrival to the New World initiated the Columbian Exchange which introduced the transfer of plants, animals, culture, human populations, and technology between the new world and the old.

Christopher Columbus wound up making four voyages in all, spanning the years 1492 through 1504.

Sadly, Columbus and his discovery has been much maligned in today's so-called progressive modern day school teachings. Kids are taught that Columbus was a vicious white rapist who practiced genocide and killed innocent natives.

But original records from that time, including Columbus' own writings still exist which totally debunks the leftists' lying propaganda.

Carol Delaney, an anthropology professor emerita at Stanford University and the author of a book on Columbus has said, Columbus initially had a favorable impression of many of the Native Americans he met and instructed the men under his command not to abuse them but to trade with them.

At one point Columbus hung some of his own men who had committed crimes against the Indians.

"When I read his own writings and the documents of those who knew him, he seemed to be very much on the side of the Indians," Delaney said, noting that Columbus adopted the son of a Native American leader he had befriended.

Professor Delaney went on to say, "I have been dismayed by the lack of knowledge about the man by those who are rushing in judgment against him and changing the day that commemorates his extraordinary achievement."

She warns against misjudging Columbus' motivations and accomplishments "from a contemporary perspective rather than from the values and practices of his own time."

But blaming white Europeans for all the ills of the world is the politically correct trend today, isn't it?

Western Civilization has been, and continues to be, marginalized throughout our public schools, colleges, and universities. Jennifer C. Braceras writing in National Review said, "The war against Columbus is cloaked in the lexicon of "diversity" and the rhetoric of "inclusion." But what many of its foot soldiers do not realize is that in fact it has its intellectual roots in the not so tolerant ideologies of Marxism and white supremacy."

According to Marx, the greed of explorers like Columbus led to the development of exploitative capitalism, characterized by "the extirpation, enslavement and entombment in mines of the aboriginal population" and "the rosy dawn of the era of capitalist production."

From the Marxist perspective, then, Columbus is synonymous with capitalism, imperialism, and oppression of the masses. Revisionist accounts of Columbus as evil were common in Soviet textbooks in the 1970s and '80s.

And modern-day Marxists still view Columbus as a man driven by a "lust for profit" and condemn the holiday that bears his name as a celebration of "the violent and bloody accumulation of capital for the ruling classes."

And here in the United States in the 1920s, the Ku Klux Klan promoted negative characterizations of Columbus in order to vilify Catholics and immigrants. The Klan tried to prevent the erection of monuments to the Great Navigator, and burned crosses in opposition to efforts to honor him.

Today's progressive elitists continue the work sown by Marx and the KKK. Anti-Columbus lies continues to be promoted in public schools.

But Columbus bashing really went mainstream, thanks in large measure to the work of radical historians such as Howard Zinn.

Zinn was a former member of the American Communist party who in his best-known work, A People's History of the United States (1980), adopts the Marxist perspective that history is the story of an ongoing struggle between the ruling class and the oppressed.

Zinn died in 2010 but his legacy of lies is still taught in schools and universities to this day, indoctrinating new generations of young people into communist thought and Western Civilization hatred.

It isn't easy pushing back on the cultural left's assault on our history and traditions, but don't give up.

Fight back by attending a Columbus Day parade. And teach your kids the truth about Christopher Columbus.

Start with the little poem.