Too bad Harris isn't a lesbian with a (physical) disability 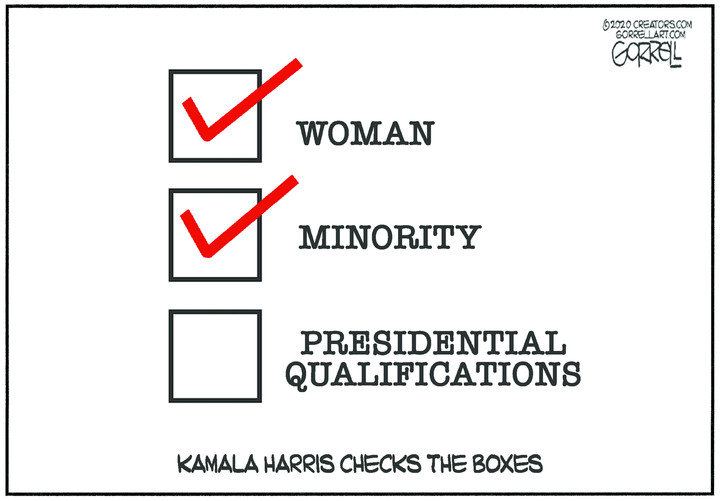 Identity politics is par for the course with the Dems. With a Jamaican father and an Indian mother they hit the trifecta, they get three identities in one; a woman, a black, and an Asian. Had there been a black/Asian, lesbian woman with a physical disability available she would have been his choice hands down, but you can't have everything.

Harris is also old school establishment politics, groomed by California's influential progressive, Willie Brown. Regarding core ideology, she has about as much as Biden does, which would be none. They both have made their careers by drifting along with prevailing leftist winds. Free college tuition, Medicare for All, open borders, the green new deal, whatever works.

Like Biden, Harris flips and flops and will literally say anything that she thinks people want to hear. Actually in that regard she is no different then most other politicians. When she was running for president she tried to brand herself as a moderate, which is a joke because in today's Democratic Party there is no such thing as a moderate anymore, only various degrees of progressivism.

I'm sure the Dems and Biden thought they hit the jackpot with the Harris pick, but not so fast say the far-left.

They aren't exactly jumping for joy. Harris is failing to impress many progressive voters, particularly given her controversial record as a prosecutor.

Briahna Joy Gray, former national press secretary for Bernie Sanders, said, "We are in the midst of the largest protest movement in American history, the subject of which is excessive policing, and the Democratic Party chose a 'top cop' and the author of the Joe Biden crime bill to save us from Trump." Oops.

Other progressives openly shared this view, but take it all with a double dose of salt in our highly charged political environment. Having the far-left say they hate Kamala Harris might be part of a reverse strategy by Democratic operatives to win over some of the moderates. Who knows.

One thing is for sure, should he be elected Joe Biden will not be calling the shots in the Oval Office, nor will Kamala Harris. These two are not free thinkers with strong wills and committed ideologies. They are, both of them, puppets of the progressive left which is (and has been for awhile now) in charge of the party.

Joe might never even make it to Inauguration Day.

If he does debate President Trump (big "if" right now) and if his declining mental state becomes apparent to millions of potential voters, he will have no choice but to step down.

Now, will that mean Harris automatically becomes the presidential candidate or will the party slot in someone else above her? It remains to be seen, but there are a lot of question marks in this year's election.

So, what else is new?

According to the mainstream news media we are all still in danger of dying from Covid-19 so shut up and keep your masks on and stay indoors.

And those rioters in the streets of Portland, Chicago, and other cities?

Ignore them; they are just peaceful protesters exercising their Constitutional rights. In other words nothing new to see here. Move along.

Meanwhile summer is still hot, the days are still long, and we have a ways to go until Election Day. Plenty of time for surprises.

What else is new?