What still hasn't been said about 'Handy Andy' 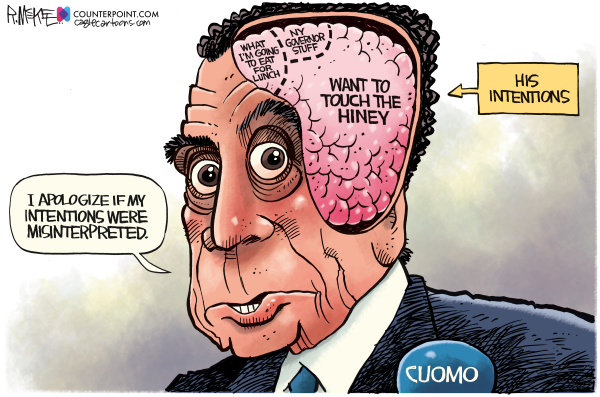 What still hasn't been said about 'Handy Andy' By the time you read this, the Governor Cuomo resignation story is old news. Just about anything anyone could say about it has been said. Nevertheless, I have some observations about the whole Cuomo thing.

It's a good thing that he decided to leave. Eleven (or more) woman have accused him of harassment. All their stories were investigated and determined to be true.

By the way, how many women need to be harassed before it rises to the level of a criminal offense? He doesn't even deny that he did what he is being accused of, so that's that.

Don't you love it when a leftist gets caught up in their own leftist laws and regulations? It's great. Cuomo was first and foremost in passing New York's 2019 Women's Justice Agenda.

And as an aside, what is all this I keep reading about him getting his nipples pierced and wearing nipple rings? This is a rumor that has been circulating for over a year. I don't know if that is true or not but how creepy can you get? Personally, I don't care if he wears nipple rings or not. But would it surprise me if he did? Nothing a bum like him does would surprise me.

Interesting how the guy gets nailed on being too touchy feely with the gals in his administration, but nothing is investigated or looked into concerning the 15,000 nursing home deaths he is responsible for. That is the real crime isn't it? I'm not down playing sexual harassment, but come on, murder is a bit more extreme. I wish they'd go after him for that.

I'm waiting for a ballad folksong to be written on him, you know, like how they used to do for the outlaws like Tom Dooley, Jessie James, Lizzie Borden, and Bonnie and Clyde. It would be called The Ballad of Handy Andy.

From out of the East Coast came a perverted gov;

He kissed and touched the girls and called it love.

The gals never wanted his clammy hands on their hips,

They never wanted to be kissed by his liver lips.

They never asked for a rub or grope,

They didn't want anything from this elitist dope.

But want it or not, guess what?

Touching and smooching is what they got.

Make up some more stanzas of your own. That's the best I can do right now.

What I don't understand is, why did he resign effective in two weeks? Why two weeks? What is he waiting for? A ground swelling of constituents to storm the streets demanding for his complete exoneration?

All the Democrats in his state to suddenly change their minds and say, "We were only kidding! Please stay in office?"

Instead of dragging it out for a couple of weeks, he should have pulled a Jack Paar (pop culture reference for those over 70 years old) and just walked off the stage, never to be heard of again. But that would have been classy. And if there's one thing he know Andrew Cuomo isn't, it's classy.

If there's any real justice still left in this world, this resignation won't be the end of it for Cuomo. I hope the legislature moves to impeach him anyway. I hope criminal charges (in keeping with Cuomo's very own Woman's Justice Agenda) will be filed. I hope the individuals who were harassed by him will file civil law suits against him. And I really hope that ultimately he is brought to justice concerning the nursing home scandal.

I've seen enough high-level politicians get away with murder and other crimes in my lifetime. It's long past time to hold the elected officials accountable for their actions. White privilege is spoke about all the time lately, but that's nonsense. The real problem is with elitist politician privilege. This is one Governor-Elite that shouldn't be allowed to skate this time.