Black-Gay Privilege and the Chicago Way 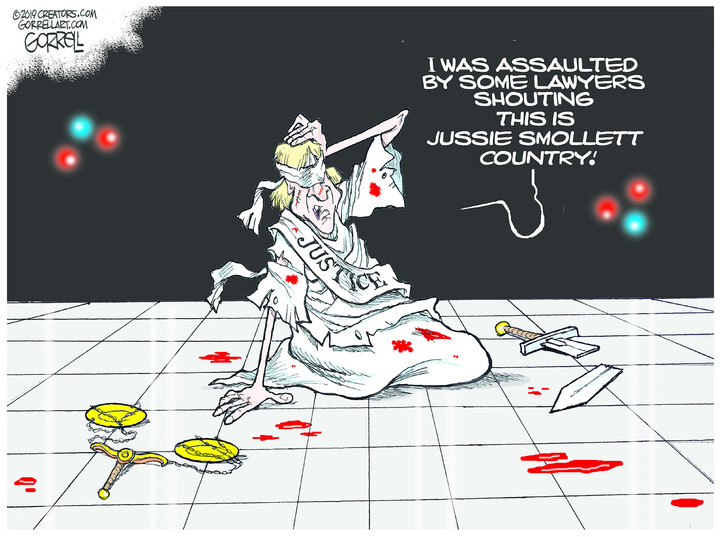 In Chicago, as in much of America today, you can always be assured of getting off scot free of a crime if you possess one of the following criteria: 1) national celebrity status or 2) connected to the "right" people. If you have both of these going for you, even better!

But now add to that a couple of bonuses like being part of the hate Trump left (which automatically puts the mainstream media on your side) and being a member of a politically correct aggrieved minority, such as African-American or LGBT and you've got it made. If you are African-American AND a LGBT person, jackpot! You've really, really, really got it made. Case in point, "Empire" actor Mr. Jussie Smollett.

On January 29, 2019, Smollett told police that he was attacked outside his apartment building by two white men in ski masks who called him racial and homophobic slurs, and said "This is MAGA country," referencing President Donald Trump's slogan "Make America Great Again." So of course this was investigated as a hate crime.

But during an exhaustive investigation Smollett's story started falling apart. The Chicago Police determined Smollett orchestrated the attack himself, paying two bodybuilding Nigerian brothers to rough him up a little. After surveillance camera video was discovered showing the brothers were indeed involved in the hoax, the two finally confessed to being part of the scheme.

Anthony Guglielmi, the chief communications officer for the Chicago Police, said "Chicago police detectives did an excellent investigation and their work was reaffirmed by an independent grand jury who brought 16 criminal counts" against Smollett. But wait. Not so fast.

In a stunning reversal, a hearing was quickly held on Tuesday morning March 26, suddenly all charges were dropped against Smollett by the Cook County State's Attorney's Office who issued a statement after the hearing: "After reviewing all of the facts and circumstances of the case, including Mr. Smollett's volunteer service in the community and agreement to forfeit his bond to the City of Chicago, we believe this outcome is a just disposition and appropriate resolution to this case."

By the way the "volunteer service in the community" consisted of a few hours stuffing envelopes for one of Jessie Jackson's organizations. The bond that he forfeited amounted to $10,000. That was it.

Everyone with a brain knew that the fix was in. Even Democrat Chicago Mayor Rahm Emanuel strongly condemned the Cook County State's Attorney's office decision to drop all charges against Jussie Smollett, calling it a "whitewash of justice" adding that "A grand jury could not have been clearer."

Chicago police superintendent Eddie Johnson also heavily criticized the decision: "Do I think justice was served? No. I've heard that they wanted their day in court with TV cameras so America could know the truth. But no, they chose to hide behind secrecy and broker a deal to circumvent the judicial system É I stand behind the detectives' investigation."

Every bit of evidence was against him, but Smollett skated. This isn't a hard thing to figure out however when you consider the power of celebrity privilege. When you're got Chicago friends in high places like Michele and Barack Obama and Jessie Jackson pulling the strings then all the police evidence in the world doesn't matter.

By playing the poor black-gay victim who is being put upon by racist Trump supporters Smollett wanted to pull off a double whammy. Number one, he wanted to bring attention to himself and help his career along, and number two, he hoped to throw a little more Trump hatred out there into the public square. Let's give him the benefit of the doubt and say that maybe that's all he had on his mind.

But Smollett's hoax could have touched off a national race riot. In the combustible political climate of today Smollett's actions might have easily thrown us into an all-out civil war. It doesn't take much these days to enrage people to violence. Bad enough when it happens for honest reasons, worse when it is predicated on a lie.

And one other thing, by pulling a Michael Avenatti hoax Smollett hasn't done any favors for real victims of violence and hate. But I don't think the guy really gives a damn.

This phony story of Smollett's might have been cooked up in any city, but how perfect that it happened in Chicago, that toddlin' town, the thug capital of the world. The home of crooked politics, payoffs, Al Capone, Weather Underground terrorist Bill Ayers, and the Obamas. Now we can add the name of Jussie Smollett to the gang.

As the songs goes, "Bet your bottom dollar you'll lose the blues in Chicago." If you're connected, that is.