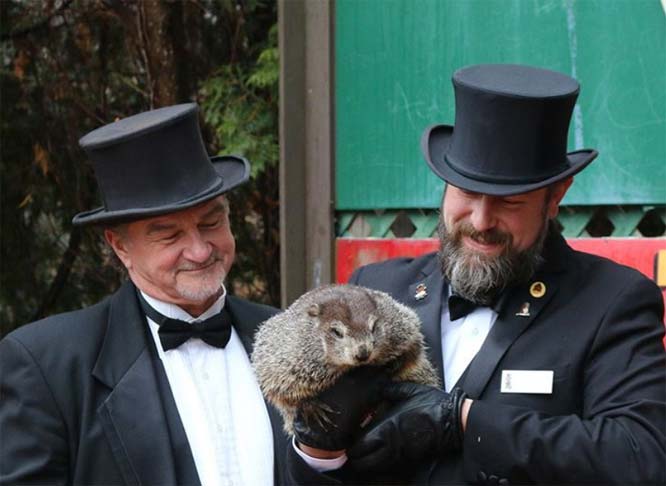 Groundhog Day Again Well here we are at Groundhog Day again. Comes around pretty fast, doesn't it? This particular year Groundhog Day has more significance than usual. Why? Glad you asked. But first let's review what traditional Groundhog Day is all about.

Groundhog Day is celebrated in the U.S. each year on February 2. On this day in mid-winter, the groundhog awakens from a long winter's nap, and goes outside of his den to see if he sees his shadow. This tradition is big, on an otherwise cold and dreary mid-winter's day.

So what exactly is the added significance this year? Don't tell me you can't see the similarity between Punxsutawney Phil and Sleepy Joe who currently occupies the Oval Office? For starters both of them are originally from Pennsylvania. Like the groundhog Sleepy Joe has spent most of his time buried under ground napping.

But now he has at last awakened and ventured outside of his den to see if he can see his shadow.

He takes a long look around and does not see his shadow (or much of anything else unless it's pointed out to him by his handlers). Still, he has declared at least six more weeks of winter Covid 19. Maybe more. The worst is yet to come. No, spring is not just around the corner we are told. And with that, Sleepy Joe goes back into his hole to sleep.

Another correlation can be made, unfortunately, between the movie "Groundhog Day" and this current administration. In the movie a cynical TV weatherman (played by Bill Murray) is sent to Punxsutawney, Pa. to cover the yearly Groundhog Day ceremony and finds himself trapped in reliving the same day over and over and over again.

With the election of Sleepy Joe, and what amounts to complete Democrat control of both houses of Congress, America will find itself reliving the Obama Administration over again day after day after day.

All President Trump's initiatives will either be rolled back or eliminated entirely. It's back to the past for America. Sleepy Joe has already signed executive orders that undo much of the accomplishments of the Trump years. Some examples:

• Freezing the approval of rules passed in final days of Trump presidency.

• Executive order to rejoin the Paris Agreement on climate change.

Approval of late-term abortions up to the final minutes of birth.

• Lifting the travel ban on countries which sponsor terrorism.

• Canceling the Keystone XL pipeline throwing tens of thousands out of work.

• Canceling construction of the border wall

• Allowing males who identify with being a female to participate in girl's sports.

Additionally you can expect to relive once again the politically correct speech and actions which you lived through during the eight years under the Obama administration. Taxes will go up again. Unemployment will go up the high levels of the Obama years. Government imposed regulations will be reinstated, hamstringing private business growth. And look for inflation to rear its ugly head.

It's all coming back. But it's coming back bigger than ever. The Democrats were never so far-left in Obama's day as they are now. Sleepy Joe will do what he's told. He'll come out of his hole. Say what he's told to say. And go back into his hole for another rest.