Sure, Justice for Jussie! Race-Hoaxing Smollett Deserves a Full 15 Years Behind Bars 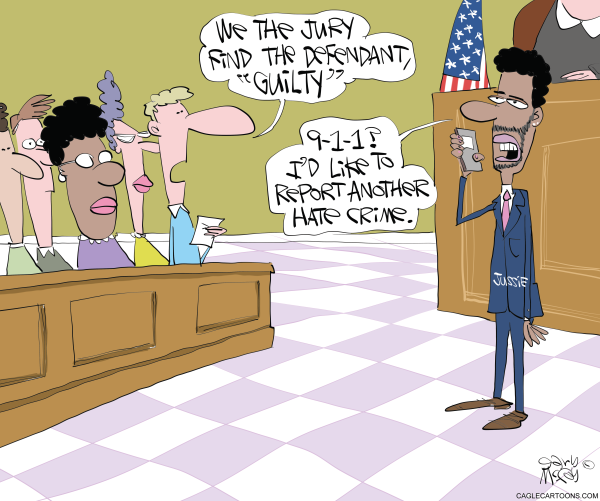 Here is what I want for Christmas: The longest-possible time behind bars for Jussie Smollett.

A tungsten-stiff prison sentence for the convicted racial hoaxster and weapons-grade pathological liar would be a huge gift, not just to me but for all of American society. After a jury found Smollett guilty of five counts of felonious disorderly conduct, the final scene of his demented production should be an unmistakable message from this countryâ€™s justice system that his behavior is sick, evil, more corrosive than Drano, and actions like it henceforth will not meet even a molecule of mercy.

First, Smollett lied to the police.

By filing a bogus police report on January 29, 2019, the actor on Fox TVâ€™s Empire, introduced into law enforcement something to which it is allergic: falsehood.

Beat cops, 911 operators, detectives, and forensic investigators pursue truth and operate best in its presence. Things quickly go wrong when those entrusted with police powers apply it based upon untruths. This alone should cost Smollett years of freedom and comfort.

Too few consequences have befallen those who have concocted fake crimes, lied to the police, and dragged America into their warped fantasies. The accusers in the phony Duke University lacrosse "sexual assault," the synthetic "rape" at the University of Virginia, and the Air Force Academyâ€™s ersatz "racial slur" episode deceived the authorities and then skated away. Experiencing the massive societal nightmares that these liars launched somehow was its own punishment.

Nonsense! Telling such lies to the authorities is horrendous and illegal. The loud clink of the lock trapping Smollett should send that signal from sea to shining sea.

Second, it would have been bad enough had Smollett, say, tried to avoid bad publicity by impersonating his brother during a drunk-driving arrest. Smollett, in fact pleaded no contest to that 2007 offense in California. This was immoral and illegal, but it did not rip a fat hole in Americaâ€™s social fabric.

Instead, Smollett decided to advance his acting career by staging his own epic. The black, gay thespian hired two Nigerian brothers to pretend to attack him in Chicago, scream anti-black and homophobic epithets, and then triumphantly announce, "This is MAGA Country" in a precinct that Donald J. Trump lost to Hillary Clinton, 24 percent to 71.3 percent.

For more than three weeks, the around-the-clock controversy split Americans in every direction: black versus white. Gay versus straight. Left versus Right. And Smollettâ€™s "MAGA Country" lie slandered Trumpâ€™s 63 million voters as black- and gay-hating bigots. That is not helpful in a nation already more divided than a decent pizza.

Third, Smollett ignited a bonfire of police resources. In response to Smollettâ€™s monument to mendacity, the Chicago Police Department yanked 24 detectives off of other cases and sent them on a 22-day wild-white-supremacist chase. CPD and federal authorities executed 50 subpoenas and warrants. They sifted through financial records, phone bills, social-media posts, and video images from 55 municipal surveillance cameras and personal devices.

"We interviewed over 100 individuals in a canvass of the area and a follow-up canvass as our investigation expanded," said Police Commander Edward Wodnicki. Cops spent some 1,000 hours seeking Smollettâ€™s "attackers" and, in the process, racked up $130,106.15 in related overtime.

Meanwhile, in response to my Freedom of Information Act request, CPD told me that criminals perpetrated 5,520 offenses in Chicago between Smollettâ€™s January 29 false report and his February 20 indictment for cooking up the whole thing. Rather than serve as extras during Smollettâ€™s teledrama, CPD could have probed or even prevented these actual crimes:

Having lied to the cops, divided the nation, and torched police assets, Smollett deserves the maximum 15-years in prison when he is sentenced next year.