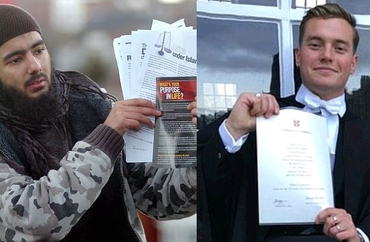 LEARNING TOGETHER: A killer and his victim.

The attack on London Bridge - no, not the 2017 attack, the new one - broke just as I was heading off to guest-host Tucker Carlson's show at Fox News. There is a small and rather sad "Christmas market" of pop-up stalls at the corner of Sixth Avenue and 44th Street - surrounded, of course, by large concrete blocks placed there in case any radicalized SUV or extremist mid-size rental car were minded to drive up on the sidewalk and mow down shoppers.

But in New York the concrete blocks are unadorned except for the stark blue lettering of "NYPD". I passed them almost every day, and reflected each time on how we've agreed to let everything get so bloody ugly in order to avoid addressing what we once used to fret over as the "root causes".

Mid-town Manhattan traditionally looks beautiful and magical at Yuletide, but that was before it was agreed that, as a young German lady put it to me three years ago, "Christmas will be a target."

So, an hour or so after the first reports out of London, the NYPD swung into action and the ugly concrete blocks on Sixth Avenue were augmented by a police cruiser flashing blue lights and officers prowling the perimeter - to reassure the public that it's possible to shop here with a minimal chance of being stabbed, run over or blown up.

That is, if you're the sort of Christmas shopper who likes to do his Christmas shopping in a sealed fortress. Say what you like about Amazon, but it's likely to be the last bollard-free retail experience in the western world.


London Bridge, of course, was fully bollarded and aesthetically disfigured after the last attack by a mysteriously radicalized motor vehicle, just two years ago. The perp, Khurum Butt, had actually appeared on television in 2016 in a Channel 4 programme called "The Jihadis Next Door". If you think that's pretty funny, the attack was even more of a side-splitter: Usman Khan, a "British man" as the media instruct us to think of him, was a convicted terrorist, tried and gaoled for his part in a plot to blow up the London Stock Exchange.

In 2013, he was sentenced to sixteen years in prison, and the judge ordered him to serve at least eight.

Which seems fair enough, since it would be prudent for a city as dependent on "financial services" as London to disincentivize the detonation of the Stock Exchange.

Yet here we are, and six years later Usman Khan is out of his cell on something called "license", which is a type of probation. But don't worry: he had to wear an electronic ankle tag, just like Adel Kermiche was wearing when he decapitated PĂ¨re Hamel during Mass at his church in Saint-Etienne-du-Rouvray. (I attended the funeral in Rouens Cathedral, a bleak affair.) As Mr Khan was known to be eager to blow up London landmarks, a condition of his "license" was that he was forbidden to visit Britain's capital.

So how did he get to be there? Ah, well, he'd asked to attend the fifth-anniversary celebrations for Cambridge University's "prison rehabilitation" programme, "Learning Together" - which exists to "bring together people in criminal justice and higher education institutions to study alongside each other in inclusive and transformative learning communities". And the authorities seem to have been flattered by Mr Khan's interest in their event, so granted him a one-day exemption to visit the capital.

Truly, parody is dead. I gave it a go, but no satirist can compete with reality.

As a teenager I read Evelyn Waugh's magnificent Decline and Fall, and in all the years since have never failed to raise a laugh from the mere thought of its modish prison governor so in thrall to his progressive reformist theories that he cannot see the obvious reality of the madman in his charge, and thus issues him the woodworking tools with which he beheads the chaplain.

The scene returned unbidden as the identities of the dead emerged. Jack Merritt was a 25-year-old Cambridge criminology graduate and an administrator of the "Learning Together" programme. He had written the dissertation for his Doctorate of Philosophy on the "over-representation" in the British prison system of young ethnic-minority males, such as Usman Khan. He had apparently donated to a charity fun run by two Cambridge professors that raised money to buy a laptop for Usman Khan.

Usman Khan used that laptop to explore his continuing-education interest in global jihad, and then he asked permission to go to Fishmongers' Hall in London to attend the "Learning Together" anniversary event.

Jack Merritt saw Usman Khan as his friend, proof of the validity of his thesis, a testament to the success of the programme. Usman Khan saw Jack Merritt as the other, the infidel. So he killed him.

There will be empty chairs round the Christmas table in two English households now and forever. And it behooves us to be sympathetic to and indulgent of those whose grief takes incoherent forms. As Laura Rosen Cohen noted, Jack Merrit's father reacted to his son's murder by Tweeting that ""my son was a beautiful spirit who took the side of the underdog".

The "beautiful spirit" was, like Waugh's prison governor, in the grip of delusions. But Dave Merritt was mourning his son, and seeking to give his lost life some kind of meaning. He was then invited to write a column for The Guardian:

Jack would be livid his death has been used to further an agenda of hate.

Why is it necessary for Merritt Sr to damn those who disagree with him and his late son as "furthering an agenda of hate"? Why couldn't it just be a public policy dispute - about cautious and responsible approaches to crime, immigration, social tranquility, multiculturalism?

If anything can be said for certain about Jack Merritt's short life, it's that in the end he wasn't terribly good at recognizing who the real "haters" are. Nor is his father, who seems to think they're Nigel and Boris, Tories, "Islamophobes". So who actually is the hater here? If you happen to think that bollards and de-radicalization programmes are insufficient to the situation, Dave Merritt will label your difference of opinion as "an agenda of hate". Which is one reason why the bollardization of everything is all we get.

The determination to denounce everything other than diversity blather as an "agenda of hate" is a big part of why we're where we are today. We need a broader conversation than Dave Merritt seems willing to permit, which means there will be more Jack Merritts.

As I wrote two years ago:

There is also a tragic, suicidal and sacrificial quality to our diversity stupidity:

"'We took him in as if he were a son,' the girl's father said, according to the Bild tabloid newspaper. He has lost his only daughter. She was stabbed and killed by her former boyfriend, an unaccompanied refugee from Afghanistan."

I hear echoes of poor Maria Ladenburger's case in the reactions to other recent killings: we are tiptoeing very close to conscious child sacrifice in the cause of "diversity".

Against that must be set the bravery of those who fought back. From the fellow who runs Fishmongers' Hall:

A staggering account from the Chief Executive of Fishmonger's of the bravery his staff showed during the London Bridge attack.

That is a well-told tale, even if it winds up like a jihadist version of the end of The Benny Hill Show: the Allahu-Akbar guy pursued doggedly by men wielding fire extinguishers and narwhal tusks and anything else they can grab. We cherish such stories because, ever since Flight 93 on 9/11, they have been the only good news of the day.

But they are not enough, not in a world where all the people who matter think like The Guardian, Dave Merritt, Cambridge University, or Cressida Dick, the head honcho of Scotland Yard, who denounced the terrorist act as (all together now) "senseless".

Au contraire, if you share the worldview of Usman Khan, as millions do, his actions make perfect sense. What's truly senseless is our reaction to them.


For example, when the TV conversation veered away from the multiculti twaddle it was only to query whether this showed Isis were still actively in the game, notwithstanding al-Baghdadi sleeping with the virgins. Isis is a symptom, not the disease - merely the most recent flag of convenience for the great enduring jihad. At the dawn of the century, it was al-Qa'eda.

By 2030, it will be something else. But the idea that what we're facing depends on some Isis high command trained at Isis staff colleges is as "senseless" as anything else.

In the early hours of December 13th, one of two men will become the United Kingdom's Prime Minister: on the one hand, Jeremy Corbyn, a man whose sympathies his entire adult life have lain with terrorists, whether Irish Republican or Islamic, and who is all for early release for persons he doesn't think should be banged up in the first place; and on the other, Boris Johnson, whose party talks tough on crime, immigration, terrorism and everything else, but under whose showboating butchness nothing ever changes.

Usman Khan was an ill-educated fanatic, but, up against all the sophisticated stupidity of the elities, he figured that out at least.