Greta Thunberg: A Living Explanation of the Left 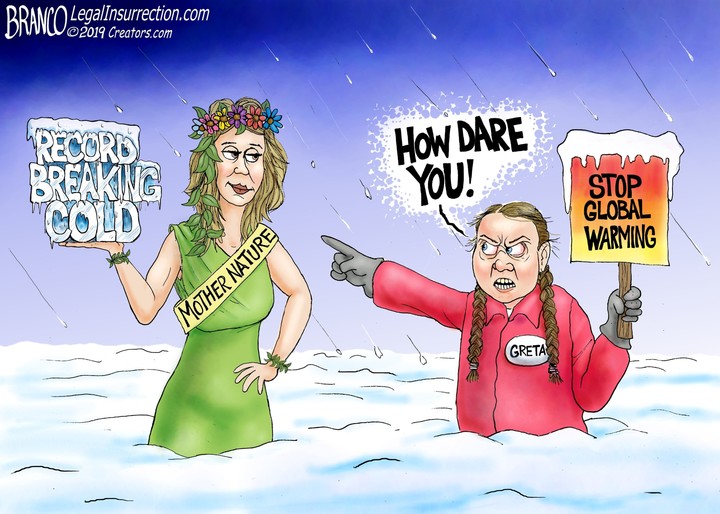 But if you ask a leftist what one or two books you should read to understand leftism, every leftist will give you a different answer — or need some time to think it over. Few, if any, will suggest Marx's "Das Kapital" because almost no leftists have read it and because you will either not finish the book or reject it as incoherent.

So, then, how is one to understand what leftism stands for?

The truth is it is almost impossible. What leftist in history would have ever imagined that to be a leftist, one would have to believe that men give birth or men have periods, or that it is fair to women to have to compete in sports with biological males who identify as females?

There are two primary reasons it is so difficult, if not impossible, to define leftism. One is that it ultimately stands for chaos:

— "Music" without tonality, melody or harmony.

— Rejection of the concept of better or worse civilizations.

— Rejection of the concept of better or worse art.

— Removal of Shakespeare's picture from a university English department because he was a white male.

— The end of all use of fossil fuels — even in transportation (as per the recent recommendation by the head of the U.N. World Meteorological Organization).

— The dismantling of capitalism, the economic engine that has lifted billions of people out of abject poverty.

The other major reason it is impossible to define leftism is that it is emotion-based. Leftism consists of causes that give those who otherwise lack meaning something to cling to for meaning.

With regard to chaos, here is what Greta Thunberg wrote at the beginning of the month: "The climate crisis is not just about the environment. It is a crisis of human rights, of justice and of political will. Colonial, racist and patriarchal systems of oppression have created and fuelled it. We need to dismantle them all."

Greta Thunberg, like all leftists, seeks to dismantle just about everything. As former President Barack Obama said five days before the 2008 election, "We are five days away from fundamentally transforming the United States of America."


As regards emotion and meaning, the Guardian reports, this is what Thunberg's father just told the BBC: "Greta Thunberg's father has opened up about how activism helped his daughter out of depression ... how activism had changed the outlook of the teenager, who suffered from depression for 'three or four years' before she began her school strike protest outside the Swedish parliament. She was now 'very happy', he said ... 'She stopped talking ... she stopped going to school,' he said of her illness."

The post-Judeo-Christian world the left has created has left a vast number of the West's citizens, especially more and more young people, with no meaning. This Grand-Canyon-sized hole is filled by leftist causes.

The fact is life is better, safer and more affluent, and offers more opportunities for more people, than ever before in history. Just about all emotionally stable, mature people should be walking around the West almost delirious at their good fortune. Americans in particular should feel this way. But leftists (again, as opposed to many liberals) are not usually emotionally stable and are certainly not mature. That is why depression among young Americans (and perhaps Swedes) is at the highest levels ever recorded. So, like Greta, they look to left-wing causes to find meaning and emotional fulfillment. Until she embraced climate crisis activism — a chance, as she sees it, to literally save the world — Greta Thunberg was so depressed "she stopped talking." But thanks to climate activism and other left-wing activism, she is now "very happy" (an assessment I suspect many observers find hard to believe).

Feminism and "fighting patriarchy" (in an age when American women have more opportunities than ever before and more opportunities than women almost anywhere else in the world), fighting racism (in the least racist multiracial society in history), fighting white supremacy (which has almost disappeared from American life) and fighting on behalf of myriad other leftist causes — in other words, fundamentally transforming society — gives meaning to people with no meaning.

None of that is morally or rationally coherent. But it is very emotionally satisfying. Just ask Greta Thunberg's dad.