A vegan sued Burger King over its 'Impossible Whopper.' He has a point 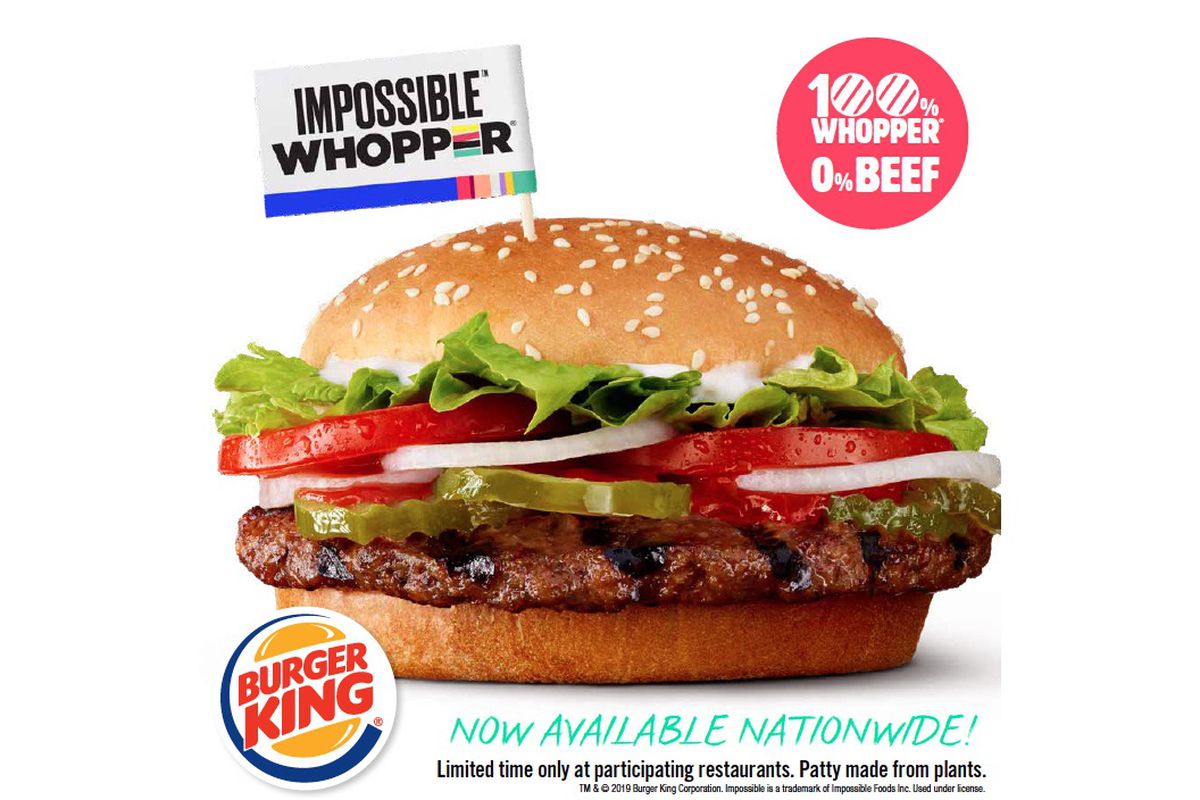 Is it really true that Burger King's new Impossible Whopper is, as the ads claim, "100% Whopper, 0% beef"? A lawsuit just filed in federal court in Florida insists that the answer is no.

The answer matters. The Impossible Whopper, designed to attract vegetarians and vegans who ordinarily avoid fast food, has driven a surge of traffic into the chain's restaurants. Comparable sales growth in the third quarter of 2019 (the quarter following the sandwich's introduction) was a brisk 4.8 percent. Key to the Impossible Whopper's attraction is the notion that it tastes like meat without actually containing any.

Enter Phillip Williams, the plaintiff in the Florida lawsuit. Williams says he is a vegan who purchased an Impossible Whopper because of that zero percent promise, only to learn later that the patty was cooked on the same broiler as regular meat burgers, and thus was actually "coated in meat by-products." (Burger King has declined to comment.)

Now, I'm as quick as anybody to condemn frivolous litigation, but if the allegations are true, Williams might well have a case. Vibrant free markets rely on truthful advertising, at least when the advertising influences the purchase decision.

If a consumer happens to be vegetarian or vegan (or even, like me, pesce-pollotarian), the claim that the Impossible Whopper contains no meat will be crucial to the choice whether to give the sandwich a try.

Not long ago, courts turned skeptical eyes to arguments by vegans that they'd been snookered. Back in 2003, for instance, a California judge dismissed a lawsuit by a "strict ethical vegan" against the maker of a tuberculosis test that, according to the plaintiff, was said to be vegan-friendly but actually contained animal products.

The plaintiff lost not because the claim was ridiculous, but because, according to the court, the class of "strict ethical vegans" was too small.

A reasonably prudent seller, wrote the court, possessed "no duty to warn of the possibility of rare, idiosyncratic, hypersensitive, or unusual reactions to an otherwise safe and useful product."

The court's reasoning is dated, the product of an era when veganism seemed quirky. No longer. According to a 2018 Gallup survey, some 3 percent of U.S. adults say they are vegan. Using current census data, this works out to around 7.6 million vegans.

One doubts therefore that a present-day court would so blithely conclude that the class of those likely to be influenced by a claim of vegan content is small, or that its preferences are idiosyncratic.

And, indeed, recent results have trended the other way.

In 2017, for example, a federal judge in Tennessee refused to dismiss a suit against Whole Foods brought by a mother who had purchased two slices of "vegan" pizza for her daughter, who then suffered a severe allergic reaction because the pizza contained nuts.

Whole Foods pointed out that vegans generally do eat nuts, but the court was unimpressed: "An ordinary consumer purchasing a slice of vegan pizza may well expect that it would not be topped with pepperoni, sausage or other meats, but the Court cannot say, as a matter of law, that the same consumer would understand that the pizza slice could contain pecan chips."

Among the court decisions I reviewed for this column, the one with the most to teach us about the Impossible Whopper suit arose when a consumer who was a devout Muslim sued the maker of Nature Made vitamins for alleged misrepresentation after discovering that the B-12 vitamins she had been taking were enclosed in a gelatin coating containing pork products.

The plaintiff pointed to a number of statements on the company's website that spoke of transparency, and one that stated "Vitamin B-12 supplements are recommended ... for vegetarians and vegans who avoid dietary sources rich in Vitamin B-12."

The case was dismissed in 2013, but it's important to understand why.

According to the court, none of the cited statements were actionable because all either failed to make a factual assertion or were in the category of puffery.

Puffery - "a mere puff," as the courts used to say - is an extravagant advertising claim made in a context where no reasonable consumer would take it to be a factual assertion.

(Think "service second to none" or "best-built car on the planet.") Had Burger King advertised its Impossible Whopper as containing "so little meat a vegan won't care," a court would certainly have deemed the claim puffery.

But the statement that the sandwich contains "0% beef" isn't puffery; it's a clear and precise assertion about the existence of a fact. If it was foreseeable that the claim would encourage those who eat no meat to try the product, and if the claim turns out to be false, it should be actionable.


Don't get me wrong. I'm not suggesting that the claim is actually false. As Impossible Foods has pointed out, the customer can ask Burger King to microwave the burger, thus avoiding any contamination with meat products.

This proposition, if it turns out to have been properly advertised, might well allow the restaurant to avoid liability altogether. And let's not forget that the burden of proof rests on the plaintiff.

Nevertheless, the lawsuit is potentially important. The number of vegans is growing. So are the efforts of U.S. firms to reach out to them.

According to Grand View Research, the market for vegan food is expected to grow at a compounded rate of 9.6 percent over the next six years. What's needed now is some judicial clarity about how precise advertisers must be as they rush into this lucrative field.