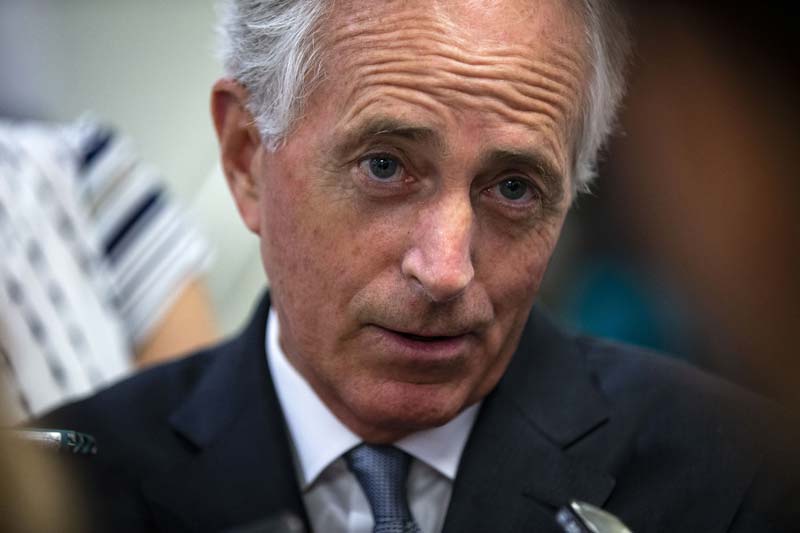 If you want to understand why the Senate voted this week to move forward with a resolution ending U.S. support for the Saudi-led war in Yemen, read the speech that Bob Corker delivered from the Senate floor on Wednesday.

The outgoing chairman of the Senate Foreign Relations Committee has long been an ally of Saudi Arabia in Washington. And yet Corker voted to move the Yemen resolution out of his committee. Mind you, he didn't say he would be supporting it when it comes to the floor for a vote. Rather, he was sending a message to the Trump administration to come down harder on Saudi crown prince Mohammed bin Salman for his role in the murder of Washington Post contributing columnist Jamal Khashoggi.

Corker was disappointed by the briefing he and his colleagues received from Secretary of Defense James Mattis and Secretary of State Mike Pompeo. Some of this is about procedure: Many senators wanted a briefing about Khashoggi from CIA director Gina Haspel. Some of this is about style: Many senators were infuriated by President Donald Trump's statement on the crown prince's unknowable culpability in the murder. Both objections beg the question: What does any of this have to do with Saudi Arabia's war in Yemen?

Just look at Sen. Lindsey Graham's comments following the briefing. Not only did he vow to hold up any legislation the White House wants in the lame-duck session until he gets a briefing from the CIA director on Khashoggi. He also promised an end to "business as usual" with Saudi Arabia, if indeed the crown prince was implicated in his murder.

Graham's concerns are valid. It's important that the House of Saud pay a price for its recklessness. And Trump committed an unforced error last week when he cleared the crown prince of any responsibility. The U.S. should not go along with the ever-changing Saudi cover-up.

That said, the Saudis have paid a price in terms of prestige. There is a process to hold many senior officials accountable, using so-called Magnitsky sanctions. And even as the administration is arguing Saudi Arabia's case to Congress, it is pressing the Saudis to curb their abuses in the Yemen war by adopting better rules of engagement and cutting off mid-air refueling to Saudi bombers.

Which brings us back to the Yemen resolution itself. It is a blunt instrument that fails to consider what happens when the U.S. leaves. If America withdraws altogether from the Yemen conflict, it's unlikely the Saudis would immediately stop fighting. They consider the Iranian presence in Yemen, and in particular Iran's shipment of missiles to its Houthi clients, as a direct threat to Riyadh.

And while it's difficult in the short term for the Saudis to replace the U.S. as their chief supplier of weapons, in the longer term a U.S. withdrawal would drive them into the arms of the Chinese and Russians. The Saudis have already signed a nuclear cooperation agreement with China and the Russians have offered to sell Riyadh S-400 anti-aircraft systems. That alone would undermine U.S. security in the region, because Saudi Arabia's current air defenses are guided by an American radar system deployed in the Middle East.

Still, let's suppose an end to American support would force Saudi Arabia to stop fighting. Would this make the terms for peace better or worse for American interests? What incentive would Iran have at that point to leave Yemen?

Graham, Corker and other Republicans who voted against the White House understand this. They must know that it's a nervy ploy to move forward with a sure-to-be bruising floor debate over the U.S.-Saudi alliance in order to spur the president to take a tougher rhetorical line on Khashoggi. They also must know that there is no chance the House of Representatives will adopt a similar measure in the remaining days of this Congress.

In that sense, this debate is even more craven politics than it appears: It's a chance for senators to vote to end U.S. support for the Saudis in Yemen without having to face the consequences of such a policy.

There is some principle involved. The genesis of the Yemen resolution is a strange alliance between conservative Republican Sen. Mike Lee of Utah and independent Sen. Bernie Sanders of Vermont. Both support the resolution in part as a way for Congress to reassert its war powers. It counts as an irony that this resolution is now the vehicle for symbolic dissent.

It's important to remember why the U.S. is aligned at the moment with Saudi Arabia: It is on the American side in a regional war against Iran.

That does not mean the crown prince has permission to send hit teams abroad to murder his critics. If the Senate wanted to be clear about that, it could easily have passed a resolution saying so. Threatening to cut off U.S. support for a war against Iran's proxies in Yemen punishes America for the crime of its ally.