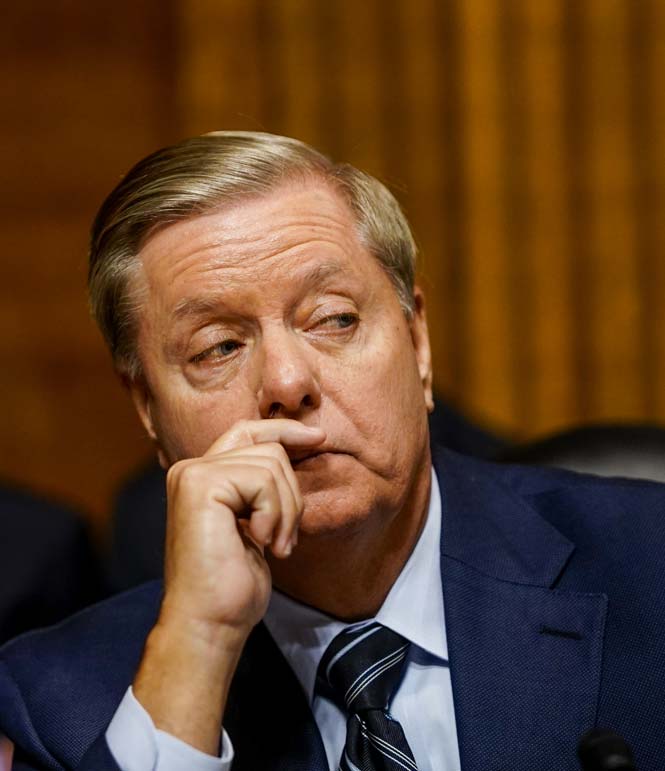 Give Lindsey Graham credit. When it comes to regime change, at least he is consistent. The Republican senator from South Carolina has supported the removal of dictators from U.S. adversaries such as Iraq and Libya, and now he wants new leadership for a crucial U.S. ally: Saudi Arabia.

Crown Prince Mohammed bin Salman "is a wrecking ball," Graham said at a press conference Tuesday after he and a small group of senators had received a CIA briefing on the October murder of Washington Post journalist Jamal Khashoggi. "If the Saudi government is going to be in the hands of this man for a long time to come, I find it very difficult to be able to do business because I think he's crazy, I think he's dangerous and he has put this relationship at risk."

The pontifications of senators on foreign policy usually don't count for much. Most of the constitutional power is invested in the executive branch. Senators get to advise and consent on treaties, diplomatic nominations and generals, but statecraft is left to the president and his advisers.

There is one area, however, in which a single senator can make a very big difference: arms sales. That is exactly what Graham promised Tuesday. He will not support any arms sales to Saudi Arabia, he said, so long as Prince Mohammed remains in charge. Graham also said he will be pressing his colleagues on both sides of the aisle to support a resolution that squarely says MBS, as he is known, is complicit in Khashoggi's murder.

This is a big deal. For one, it undermines President Donald Trump's pledge last month not to hold arms sales to Saudi Arabia hostage over the Khashoggi affair. Furthermore, it puts pressure on the State Department to sanction the de facto head of the Saudi state. So much for Graham's early-autumn bromance with Trump during the Brett Kavanaugh hearings.

But will it work? Can Graham, and Congress in general, apply enough pressure on Saudi Arabia to persuade the ailing King Salman, MBS's father, to choose another crown prince before he dies?

This approach to regime change has not been tried before. The U.S. has dabbled in covert and overt regime change - with adversaries. The U.S. has also supported military coups for its clients, such as South Vietnam. But pressuring an ally to pick a new monarch through suspension of arms sales and congressional censure is new territory.

That task is more difficult because of the opacity of the Saudi royal family. It's highly implausible that the U.S. has much influence over it, says Patrick Clawson, the director of research for the Washington Institute for Near East Policy. For now, he says, the task should be to get the Saudis to change their behavior in the future instead of dwelling on the past. Also, the time to exert such influence would have been in 2015, when MBS was positioning himself to be the heir.

There is an additional problem with Graham's approach. If he forces the State Department to apply what are known as Magnitsky sanctions on MBS, why stop there? Khashoggi's murder was brutal, yet there are other heads of state more deserving of this dishonor than MBS: The leaders of Russia, Turkey and Iran come to mind. And if the U.S. starts applying sanctions to heads of state, what is to stop other countries from sanctioning the U.S. president?

Finally, the Saudis also have leverage of their own. While Graham is correct that the Saudis have joined the American fight against Islamic State and Iran for their own strategic reasons, not as a favor to the U.S., the Saudis can still affect the price of oil. As the world's largest exporter, they can make gasoline more expensive for Americans whenever they wish. The Saudi use of its oil weapon after the U.S. supported Israel in the Yom Kippur War helped caused the infamous gas station lines of the 1970s.

All that said, Graham is to be commended for trying to force Saudi Arabia to pay a greater price than the Trump administration has been willing to impose. He's right that America's allies must know that they cannot demolish international norms the way MBS has. Graham also deserves praise for pursuing a more sensible approach to Saudi Arabia than the resolution the Senate will debate next week that would cut off all U.S. support for the war in Yemen.

"Saudi Arabia is a strategic ally and the alliance is worth saving," Graham said Tuesday. "But not at all costs." The senator has named his price: the removal of Crown Prince Mohammed bin Salman. What remains to be seen is whether Saudi Arabia is willing to pay it.