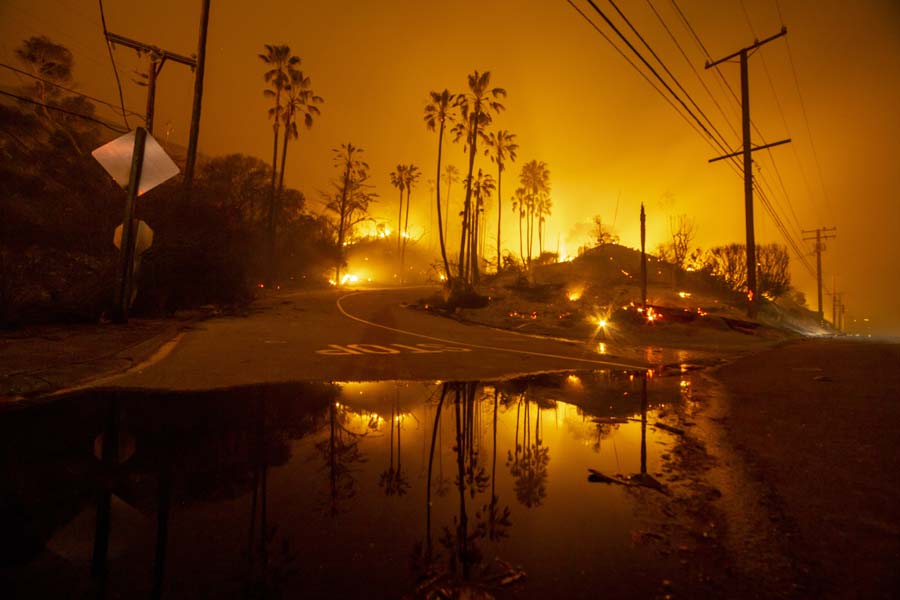 California was, until recently, clouded under a blanket of smoke for weeks. Stanford University, where I work, sent students and faculty home early for Thanksgiving. The campus is more than 200 miles southwest of the 150,000-acre Camp Fire that just incinerated the Sierra Nevada foothill town of Paradise, and yet the entire Bay Area has been buried under collateral haze for days. I am a fifth-generation native Californian and remember many horrific Sierra Nevada fires, but never anything remotely comparable to the blazes of 2018.

Here in Fresno County, in the San Joaquin Valley, positioned between the Coast Range and Sierra Nevada mountains, the stagnant air for weeks has remained as polluted as China's. When the normal northerlies blew, we were smoked in from the Camp Fire, 250 miles to the north. When the rarer southerlies took over, some of the smoke from the 100,000-acre Woolsey fire in the canyons of Malibu arrived from 230 miles distant.

July and August were nearly as incendiary as November. The huge, 450,000-acre Mendocino County conflagrations, the horrific Shasta-area Carr fire (nearly a half-million acres), and the nearby Ferguson fire in the Madera foothills all combined to make the air nearly unbreathable for two months throughout the Central Valley. Yet Californians in the irrigated center of the state were the lucky ones, breathing smoke rather than seeing fires overwhelm their homes and communities.

What is going on in California? Governor Jerry Brown, most of the Democratic-majority state legislature, the academy, and the administrative state have rushed to blame man-made global warming for the undeniable dry spell from May to mid-November that turned mountain canyons into tinderboxes. Usually autumn rains keep hillsides wet enough to prevent sudden combustions when the late autumn winds kick up. Not this year. Yet, if California has been arid and rainless these past months, two years ago we experienced near-record snow and rain that started in early fall and continued into late spring. Last year, we saw near-normal levels of precipitation.

If our life-giving reservoirs of the state's vast California Water Project and federal Central Valley Project are currently not full, it is mostly because millions of acre-feet of stored water were released to flow into the San Francisco Bay estuaries and the delta — contradicting most of the original mandates of the water projects of providing flood control, power generation, lake recreation, and irrigation for California residents. Our ancestors rightly had assumed that two-thirds of the state's people would continue to live where one-third of the state's precipitation fell, requiring vast water transfers aimed exclusively for municipal and irrigation needs, admittedly at the expense of nineteenth-century whitewater rivers, flood plains, and riparian landscapes. Protecting the delta smelt population in San Francisco Bay, or restoring ancient salmon runs in the San Joaquin River, were not the concerns of these farseeing water engineers, who never imagined that their envisioned third-generation water projects would either be cancelled outright or would fail to keep pace with California's burgeoning growth.


Left unsaid is that more than 130 million trees died throughout the state's foothills and mountain ranges during the drought of 2011â€“2016 and were not removed from the forest floor, providing an immensity of natural kindling for fires. To walk in a Sierra Nevada forest during summers requires navigating not just over fallen limbs and branches, but also rotting trees — all amid dead brush and dead but still-towering brown pines. Gone are the periodic meadows and open spaces of the 1960s and 1970s, when logging companies harvested trees, thinned out the forests, replanted what was cut, and cleaned up the forest floor. Yet given California's stringent anti-logging regulations of the last 20 years, there is no real California timber industry left, at least as it once was. And scavenging even dead trees prompts a great debate, as environmentalists lecture on the advantages of letting the dead wood be. Or, as Sierra Club organizer Daniel Barad put it in a January 2018 Sacramento Bee op-ed: "Dead trees are vital components of the forest ecosystem and should be removed only when necessary." He added of the state's millions of dead conifers: "Most are in remote areas, and removing them would be extremely costly and ecologically devastating. The black-backed woodpecker, northern fisher and northern spotted owl are among the species that rely on dead tree habitat . . . Also, dead trees store carbon for decades. As they decompose, much of their carbon returns to the soil, where it is held for thousands of years. In a large-scale removal, all that carbon is disturbed." Perhaps Sierra Club environmental sensitivity is well-meant, but such orthodoxy ensures that the summer and autumn air that 40 million residents breathe, along with the lives of thousands living in the mountains, become secondary concerns to beetles and woodpeckers.

Other force multipliers combined with the drought and poor forest management to ensure that California's fires were especially destructive to human habitats. One, California is no longer a state where most live along a coastal strip or in the flat, irrigated Central Valley. For a variety of economic, political, and cultural reasons, millions have flocked to the Coast Range canyons near the ocean that offer cheaper home sites and less chilly morning and evening weather. Looking down from a plane at night over the California Sierra Nevada foothills no longer reveals a sea of darkness, but rather millions of lights sparkling from private homes. Again, for many such rural refugees, Sierra Nevada foothill living is cheaper and quieter than the sprawling, congested metropolises of Sacramento, Fresno, and Bakersfield. Fifty years ago, many of these fires would have taken out isolated cattle ranches, power stations, and a few homesteaders. Now they threaten entire communities.

Two, given its length and long parallel mountain ranges, California is a longitudinal state, with its rails and freeways mostly running north and south, such as the 101, I-5, and 99 corridors. It's difficult to travel latitudinally across California. Environmentalists and no-growth activists cancelled many of the envisioned auxiliary trans-Sierra and trans-Coast Range routes long ago. Few good highways exist into and out of the coastal and Sierra Nevada mountain ranges that might allow quick and safe access for firefighting and evacuation teams.

Roads between mountain communities are windy, narrow, and often potholed and crumbling (California remains near last in state-by-state infrastructure ratings, though it will soon have the nation's highest gas taxes). For many foothill residents, the ensuing lack of traffic and easy mountain access is seen as a sort of blessing, ensuring privacy and a lack of tourism. Unfortunately, the net result of both poor and too few roads was that when wind-swept fires leapt through canyons and up hillsides, it was almost impossible to escape rural communities and private residences with any rapidity. And so, homes burned down and people died.

In a larger sense, twenty-first-century California is starting to confront the real-life consequences of its own abstract ideologies — on several tragic fronts. The nearly five-year drought taught us that entire communities and vast irrigated acreages could disappear if we ignored our forefathers' warnings to keep building reservoirs, aqueducts, and dams commensurately with population growth, and to abide by the original rationale of these multi-billion-dollar projects. Open borders and sanctuary cities appear humanitarian, but when the result was the arrival of millions of impoverished immigrants without legal status, English fluency, and high school diplomas, state resources once prioritized for roads, bridges, canals, reservoirs, and airports were directed to accommodate vast expansions of social-welfare programs. The idea of ending close state supervision of those suffering from psychological disorders and mental illnesses, when combined with strict zoning and environmental laws that stymied new low-cost housing construction, led to hundreds of thousands of homeless living on the sidewalks of the state's temperate coastal cities, from San Diego to Berkley. Medieval plagues like typhus and infectious hepatitis are often the result.

These same paradoxes help explain the 2018 epidemic of destructive forest fires, a tragic consequence of ideology trumping reality and common sense. Once upon a time, the architects of state governance understood that living in paradise required constant investments and vigilance against the vagaries of both Mother Nature and human nature, whether that meant managed forestry, road construction, reasonable building codes, or water storage and transfers. In theory, at least, millions of dead trees may have been ecological assets for a near pristine, mid-twentieth-century California of 10 million people. But such natural kindling can pose an existential danger to a complex civilization of 40 million twentieth-first century state residents.

Californians are being tragically reminded that the abstract ideologies of a few impose life-and-death consequences on millions.

© 2022 Manhattan Institute. This first appeared in their publication, City Journal.