The Co-Dependents of the 'Independent' Counsel 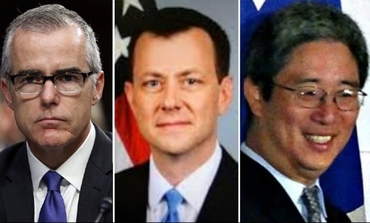 1) Let me start with an immigrant's observation: My sweetly naive understanding of an "independent counsel" is that he should be "independent". For example, even in the presently desiccated condition of the Commonwealth, it's generally understood that, when you've got a problem and you want someone independent to investigate it, "independent" means outsider. Three examples off the top of my head:

~Twenty years ago, after the Good Friday Agreement, some guy was supposed to be appointed to supervise the decommissioning of weapons by paramilitary groups in Northern Ireland. Obviously, if he'd been some hoity-toity English civil servant, the IRA would have said nuts to that. Likewise, if he'd been some Papist republican from Derry Town Council, the UVF would have told 'em to shove it. So they appointed a Canadian general, John de Chastelain ...because he was an outsider, and thus independent of the competing interests.

~Likewise, in 2003, when various factions in the Solomon Islands risked tearing the joint apart, the guy brought in to sort it out was Australia's Nick Warner (who steps down this weekend as head of Canberra's Secret Intelligence Service) ...because he was independent of those factions.

~And in 2009, when the Government of the Turks and Caicos Islands was suspended for corruption, it was after an investigation by the English judge Sir Robin Auld ...because he was entirely independent of the various local sleazebags.

I appreciate that all the above is easier to do in the remnants of empire than it is in the American system. But there isn't even the figleaf of "independence" when you appoint a career swamp-dweller like Robert Mueller, a man who has relationships with every player in Washington going back decades. The parade of hacks infesting the cable shows to inform us solemnly that they've known Mueller for years and he's the very apotheosis of a straight shooter is, in fact, the strongest evidence of why he should never have been appointed: he's the insiders' insider. When Mueller decided to stage his pre-dawn swoop on Paul Manafort's bedroom, for example, he was raiding the home of a longtime client of his own law firm, WilmerHale.

2) As for that "straight shooter" guff, as I wrote last year about the previous "eagle scout":

Conservative commentators assured us that, when it comes to straight arrows, no arrow is straighter than FBI honcho James Comey - non-partisan, career public servant, will follow the evidence whereso'er it leads...

All bollocks. Bollocks on stilts... A 6' 8" gummi worm would be more of a straight arrow.

And so it goes with Comey's successor as Trump's Javert. My advice is that, whenever lifelong swampers assure us of the integrity of any individual, assume "straight arrow" is Beltway-speak for "slimey duplicitous permanent-state operator" and you can't go wrong.

3) One of the first things Mueller did was to appoint FBI counter-intelligence honcho Peter Strzok to his "independent" team. He should not have done that. Not because Strzok is a Democrat (presumably almost everyone at the FBI votes either Democrat or Republican), but because Strzok had been a key player in Comey's Hillary investigation. The investigators' comparative treatment of the two candidates was already an issue, and the subject of the Russia investigation had already spent the better part of a year denouncing the investigation of his rival as a sham and a disgrace. In effect, Trump had already, without even knowing of the guy's existence or his Zelig-like ubiquity, questioned Strzok's integrity. So why appoint him to a second investigation?

4) Furthermore, why similarly appoint his mistress, FBI lawyer Lisa Page, to both investigations? The FBI has over 35,000 employees. Yet the same handful of key players are running both the Clinton and Trump cases, even though the latter is supposed to be "independent". So the same operatives are meeting with MI6 dossier-concocter Christopher Steele, and going to the FISA court to get surveillance warrants, and entrapping Michael Flynn. The appalling Mueller effectively merged the two investigations into one continuous caper run soup to nuts by the same crowd. Phase One: Get Hillary off the hook. Phase Two: Get Trump on it.

5) Just as the Hillary investigation merged with the Trump investigation, so both merged with Fusion GPS, the oppo-research guys working for the Clinton campaign. The conflicts of interest intertwine so thoroughly that they reach up beyond the FBI into the highest reaches of the Department of Justice. At this stage, it would be no surprise to learn that Mueller and Comey had accidentally failed to disclose that they were the Chairman and Deputy Chairman of Fusion GPS. Am I exaggerating? By maybe a hair. This week it emerged that the Associate Deputy Attorney-General, Bruce Ohr, "failed to disclose" that his wife Nellie was working for Fusion GPS.

Oh, really? On the reception desk? As a security guard? No, she was hired by Fusion GPS to do anti-Trump research.

So Attorney-General Jeff Sessions (who's the root of a lot of this mess, up to and including Alabammy going blue) is obliged to recuse himself, but, meanwhile, his Associate Deputy is meeting with Christopher Steele and the head of Fusion GPS and has his wife on the payroll of Fusion GPS but it never occurs to him that this is anything he needs to mention to anyone, least of all dear old Recusable Jeff. You can apparently rise to the ranks of Associate Deputy Attorney-General in the Department of Justice without any grasp of basic ethical considerations. And, when you're found out, you're mildly "demoted", but the fact that you're a walking toilet of ethics breaches goes otherwise unpunished.

6) Fusion GPS is a well-named enterprise. The function it played in 2016 was to fuse the Clinton campaign and the Department of Justice, and thereby get Hillary to her destination. It failed only in the latter, so it fell back to Plan B: Direct the incoming administration into the lake.

7) The brazenness of the above suggests a broad and high-reaching culture of contempt within the FBI and DoJ for the integrity of "public service". That's confirmed by the content of the texts between Strzok and his mistress. Granted no man is a hero to his valet or his sexter, but even so the juvenile witlessness of their billets doux is remarkable for one of America's most senior counter-intelligence figures and therefore presumably someone trained to be circumspect in insecure communications. Instead, he gives us John le CarrĂ© as rewritten by Teen Beat. Here's Strzok watching last year's Republican Convention as the candidate's family arrives in the hall:

TURN IT ON, TURN IT ON!!! THE DOUCHEBAGS ARE ABOUT TO COME OUT

Lisa Page eschews the CAPS LOCK but agrees with the sentiment:

And wow, Donald Trump is an enormous douche.

OMG!! LOL!!! I'm as cynical as anyone, but I confess to being mildly surprised at how shallow the Deep State is.

8) Most of the above is about connections - professional, social, class, ideological, attitudinal. But one text is suggestive of action. Strzok to Miss Page, August 15th 2016:

I want to believe the path you threw out for consideration in Andy's office that there's no way he gets elected â€” but I'm afraid we can't take that risk. It's like an insurance policy in the unlikely event you die before you're 40...

"He" is Trump. "Andy's office" is believed to be that of the Deputy Director of the FBI, Andrew McCabe, who was in charge of the Trump investigation - then just a few weeks old. The conversation appears to be a violation of the Hatch Act, which prohibits civil servants from engaging in political activity while on duty and in a government office.

But what does "I'm afraid we can't take that risk" (of Trump winning) actually mean?

Does it mean, for example, that "I'm going to dress up this dodgy Christopher Steele dossier Hillary and Fusion GPS passed along to us into something a bit more credible-seeming and take it to the FISA court to get authorization to tap everyone around Trump round the clock until we hit paydirt"?

9) The above text explains why Mueller hired the same-old-same-old Hillary crowd for his supposed "independent" investigation into Trump: The same people had to run both investigations because otherwise the new investigators would discover the shenanigans of the old investigators. Putting Strzok and Page on the team was the FBI's way of protecting itself.

10) Nobody should accord this wretched and corrupted pseudo-investigation the figleaf of respectability. Even in the federal justice system, no successful prosecution by this conflicted team would withstand appeal. As to the ostensible crime they're investigating - "collusion" (which, in fact, is not a crime) with the Russians - so far:

b) The only person colluding with the Russians is Christopher Steele, former head of "the Russia house" at MI6.

Trump would be within his rights (and it would be in the interest of the nation) to fire Mueller. But that's apparently politically impossible. So it would be nice to think that Mueller would have the decency to resign and recommend the end of his "investigation".

Politically, America is a bitterly divided 50/50 nation, where a few hundred thousand votes in a dwindling number of swing states determines control of the national (it's no longer really "federal") government. That places an ever greater burden on the professional civil service to behave professionally, and to be perceived as behaving professionally. Mueller, Comey, McCabe, Ohr, Strzok, Page and the rest have engineered a situation that ensures half the country will never accept the legitimacy of whatever their "investigation" concludes. If they indict Trump, one half will regard it as a coup by Deep Staters in the bag for Hillary. If they exonerate Trump, the other half of the country will blame Trump for discrediting these fine upstanding career public servants.

So Mueller and his team have made things worse. Thanks a lot, corruptocrats.

The FBI and DoJ are in at least as bad a state as the Turks and Caicos government was. So perhaps, if Mueller has the decency to resign, he could recommend a Tripartite Commission of Sir Robin Auld, General de Chastelain and Mr Warner. Absent that:

a) Any future independent counsels should be genuinely independent - ie, non-Washingtonians;

b) They should not use the FBI as their investigators;

c) They should have no authority to charge their targets with federal "process" crimes, such as lying to the FBI (as Flynn and Papadopoulos were strongarmed into confessing to).

It is not unreasonable to conclude that this pseudo-investigation is an elaborate bit of FBI dinner theatre to obscure Strzok and others' attempt to subvert the election. What Strzok and Ohr have done is far worse than anything Flynn and Papadopoulos did: why should only the latter face jail time?