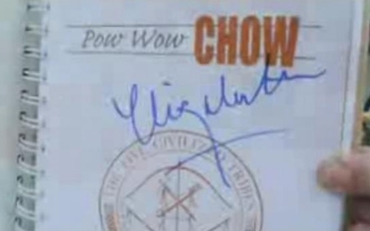 The other day President Trump referred jokingly, yet again, to Senator Elizabeth Warren as "Pocahontas", and as a result is even more totally racey-racey-racist than he was the week before. If you're finding this all a bit hard to follow, relax:

If a white grade-school teacher pretends to be black, that's totally racist and you should denounce him as such immediately;

But if a white professor pretends to be Harvard Law School's "first woman of color" and you point it out, then you're the racist.

Got that? It's easy when you know how:

But if a white Harvard professor takes up valuable space in an authentic tribal cookbook, that's not cultural appropriation ...er, because the authentic tribal recipes she submitted turned out to come from the Duke of Windsor's favorite restaurant.

When the left patrol identity politics so ruthlessly they demand that even Elizabeth Warren's claim to be Cherokee must be taken seriously, it becomes necessary for the sake of societal sanity to laugh at her, again and again. In doing so, Donald Trump is performing a valuable service to the republic.

How does she know she's a Cherokee maiden? Well, she cites her grandfather's "high cheekbones," and says the Indian stuff is part of her family "lore." Which was evidently good enough for Harvard Lore School when they were looking to rack up a few affirmative-action credits. The former Obama special adviser to the Consumer Financial Protection Bureau and chairperson of the Congressional Oversight Panel now says that "I listed myself in the directory in the hopes that it might mean that I would be invited to a luncheon, a group, something that might happen with people who are like I am," and certainly not for personal career advancement or anything like that. Like everyone else, she was shocked, shocked to discover that, as The Boston Herald reported, "Harvard Law School officials listed Warren as Native American in the '90s, when the school was under fierce fire for their faculty's lack of diversity."

And so the same institution at which young Barack was "the first African-American president of The Harvard Law Review" notched up another famous first: As The Fordham Law Review reported, "Harvard Law School hired its first woman of color, Elizabeth Warren, in 1995." To the casual observer, Mrs. Warren, now the Democrats' Senate candidate, might seem a 100 percent woman of non-color. She walks like a white, quacks like a white, looks whiter than white. She's the whitest white since Frosty the Snowman fell in a vat of Wite-Out. But she "self-identified" as Cherokee, so that makes her a "woman of color." Why, back in 1984 she submitted some of her favorite dishes to the Pow Wow Chow cookbook, a "compilation of recipes passed down through the Five Tribes families."

The recipes sent in by "Elizabeth Warren -- Cherokee" include a crab dish with tomato mayonnaise. Mrs. Warren's fictional Cherokee ancestors in Oklahoma were renowned for their ability to spear the fast-moving Oklahoma crab. It's in the state song:

Ooooooklahoma!
Where the crabs come sweepin' down the plain. . .

But then the white man came and now the Oklahoma crab is extinct, and at the Cherokee clambakes they have to make do with Mrs. Warren's traditional Five Tribes recipe for Cherokee Lime Pie...

Even in a world where everyone's incredible, some things ought to be truly incredible. Yet Harvard Law School touted Elizabeth "Dances with Crabs" Warren as their "first woman of color" -- and nobody laughed.

Because, if you laugh, chances are you'll be tied up in sensitivity-training hell for the next six weeks.

Because in an ever more incredible America being an all-white "woman of color" is entirely credible.

But, with the impertinent jackanapes of the press querying the bona fides of Harvard Lore School's first Native American female professor, the Warren campaign got to work and eventually turned up a great-great-great-grandmother designated as Cherokee in the online transcription of a marriage application of 1894.

Hallelujah! In the old racist America, we had quadroons and octoroons. But in the new post-racial America, we have -- give me a minute to fish out my calculator -- duoettrigintaroons! Martin Luther King dreamed of a day when men would be judged not on the color of their skin but on the content of their great-great-great-grandmother's wedding-license application. And now it's here! You can read all about it in Elizabeth Warren's memoir of her struggles to come to terms with her racial identity, Dreams from My Great-Great-Great-Grandmother.

Unfortunately, the actual original marriage license does not list Great-Great-Great-Gran'ma as Cherokee, but let's cut Elizabeth Fauxcahontas Crockagawea Warren some slack here. She couldn't be black. Like Barack Obama's composite girlfriend, she would if she could, but she couldn't. But she could be 1/32nd Cherokee, and maybe get invited to a luncheon with others of her kind -- "people who are like I am," 31/32nds white, and they can all sit around celebrating their diversity together. She is a testament to America's melting pot, composite pot, composting pot, whatever.

Just in case you're having difficulty keeping up with all these Composite-Americans, George Zimmerman, the son of a Peruvian mestiza, is the embodiment of endemic white racism and the reincarnation of Bull Connor, but Elizabeth Warren, the great-great-great-granddaughter of someone who might possibly have been listed as Cherokee on an application for a marriage license, is a heartwarming testimony to how minorities are shattering the glass ceiling in Harvard Yard. George Zimmerman, redneck; Elizabeth Warren, redskin. Under the Third Reich's Nuremberg Laws, Mrs. Warren would have been classified as Aryan and Mr. Zimmerman as non-Aryan. Now it's the other way round. Progress!

Coincidentally, the Equal Employment Opportunities Commission last week issued an "Enforcement Guidance" limiting the rights of employers to take into account the criminal convictions and arrest records of job applicants because of the "disparate impact" the consideration of such matters might have on minorities. That's great news, isn't it? So Harvard Law School can't ask Elizabeth Warren if she's ever held up a liquor store because, if they did, the faculty might be even less Cherokee than it is...

In the new Composite America, you can celebrate diversity all by yourself.

Two of the possibly plagiarized recipes, said in the Pow Wow Chow cookbook to have been passed down through generations of Oklahoma Native American members of the Cherokee tribe, are described in a New York Times News Service story as originating at Le Pavilion, a fabulously expensive French restaurant in Manhattan. The dishes were said to be particular favorites of the Duke and Duchess of Windsor and Cole Porter.

Why not? As Broadway's first Native American composer, Cole Porter wrote about his Indian blood in his famous song, "I've Got Sioux under My Skin."

Actually, that last line quoted above briefly made me wonder if writing about American liberalism isn't a threat to one's sanity. Some societies are racist, some societies work hard to be non-racist, but only in America does the nation's most prestigious law school hire a 100 percent white female as its first "woman of color" on the basis that she once mailed in the Duke of Windsor's favorite crab dish to a tribal cookbook. If the House of Windsor is now one of the five tribes, all America has to do is restore the monarchy, and the Queen will be your first "woman of color" in the Oval Office.