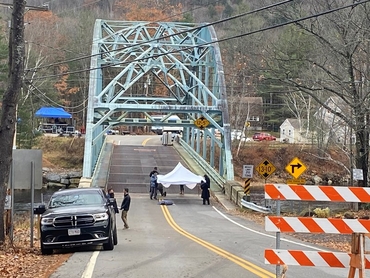 There will be no infrastructure arising from the infrastructure bill: it is impossible to imagine today's America building a new dam, never mind a Chinese bullet train or the artificial islands supporting the Ã˜resund Bridge.

So instead "infrastructure" has been redefined to mean more transgendered permit-deniers on the wetlands committee.

To underline the new meaninglessness, Joe Biden was snarling traffic for miles around in my own New Hampshire county to mumble and prompter-squint next to a bridge over the Pemigewasset in Woodstock.

The bridge has been on the state's "red list" for eight years. Biden is not opening a new bridge, but announcing that, under his infrastructure plan, the bridge will be eligible to be on some new federal list for another eight years.

This is Potemkin bridge work for Potemkin government. Everything that matters is going on elsewhere.

If you seek an inspirational bridge story from Grafton County, New Hampshire, try this - from my book After America:

As we discussed earlier, in a liberal world much of our language decays into metaphor, disconnected from physical reality. A few years ago, a Fleet Street colleague accidentally booked himself into a conference on "building bridges" assuming it would be some multiculti community outreach yakfest. It turned out to be a panel of engineers discussing bridge construction. If only more "bridge building" was non-metaphorical: The ability to build real bridges is certainly an attribute of community, and one Americans used to be able to do for themselves.

A friend of mine is a New Hampshire "selectman", one of those municipal offices Tocqueville found so admirable. In 2003, a state highway inspector rode through town and condemned one of the bridges, on a dirt road that serves maybe a dozen houses.

That's the bad news. The good news was the 80/20 state/town funding plan, under which, if you applied to Concord for a new bridge, the state would pay 80 per cent of the cost, the town 20.

While the Select Board was pondering this, another bridge was condemned. The state's estimate was $415,000, and, given that the previous bridge had been on the to-do list for six years, they weren't ready to pencil this second one in on the schedule just yet. So instead the town put in a new bridge from a local contractor. Cost: $30,000. Don't worry; it's all up to codeâ€”and a lot safer than the worn-out temporary bridge still waiting for the 80/20/60/40/70/30 deal to kick in.

As my friend said at the meeting:

Screw the state. Let's do it ourselves.

"Screw the state" is not a Tocquevillian formulation, but he would have certainly agreed with the latter sentiment. When something goes wrong, a European demands to know what the government's going to do about it. An American does it himself. Or he used to - in the Jacksonian America a farsighted Frenchman understood so well. Big Government is better understood as remote government. If we can't "do it ourselves" when it comes to painting schoolrooms or building bridges, we should certainly confine it to the least remote level of government.