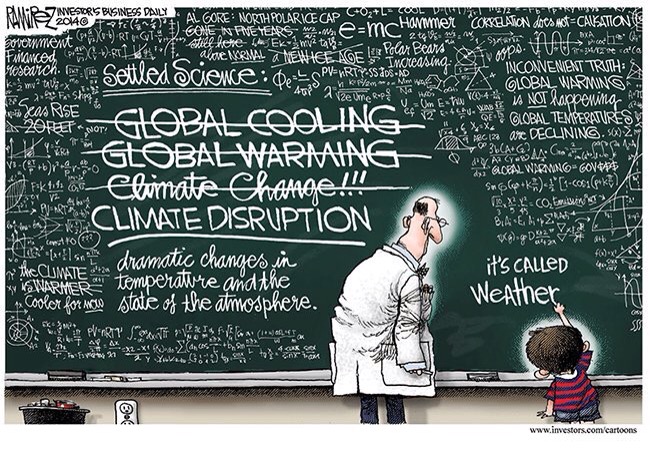 I hear that climate change will destroy much of the world.

"There will be irreversible damage to the planet!" warns a CNN anchor.

Joe Biden says he'll spend $500 billion a year to fight what his website calls an "existential threat to life."

I'm a consumer reporter. Over the years, alarmed scientists have passionately warned me about many things that they thought were about to kill Americans.

If those things don't get us, "West Nile Virus will!" Or SARS, Bird Flu, Ebola, flesh-eating bacteria or "killer bees."

Experts told me millions would die on Jan. 1, 2000, because computers couldn't handle the switch from 1999. Machines would fail; planes would crash.

The scientists were well-informed specialists in their fields. They were sincerely alarmed. The more knowledge you have about a threat, the more alarmed you get.

Yet, mass death didn't happen. COVID-19 has been the only time in my 50 years of reporting that a scare proved true.

The opposite is true. As we've been exposed to more plastics, pesticides, mysterious chemicals, food additives and new technologies, we live longer than ever!

That's why I'm skeptical when I'm told: Climate change is a crisis!

Climate change is real. It's a problem, but I doubt that it's "an existential threat."

When Marc Morano says it, activists try to prevent him from speaking.

"They do not want dissent," says Morano, founder of ClimateDepot.com, a website that rebuts much of what climate activists teach in schools.

"It's an indoctrination that's so complete that by the time (kids) get to high school, they're not even aware that there's any scientific dissent."

Morano argues that politicians use fear of global warming in order to gain power.

"Climate Hustle 2" features Senator Chuck Schumer shouting: "If we would do more on climate change, we'd have fewer of these hurricanes and other types of storms! Everyone knows that!"

But everyone doesn't know that. Many scientists refute it. Congress' own hearings include testimony about how our warmer climate has not caused increases in the number of hurricanes or tornadoes. "Climate Hustle 2" includes many examples like that.

"Why should we believe you?" I ask Morano. "You're getting money from the fossil fuel industry."

After all, Daily Kos calls him "Evil Personified" and says ExxonMobil funds him.

"Not at all," he replies. "I'm paid by about 90% individual contributions from around the country. Why would ExxonMobil give me money (when) they want to appear green?"

Morano's movie frustrates climate activists by pointing out how hypocritical some are.

Then he flies to Europe to attend a party.

I like watching Morano point out celebrities' hypocrisy, but think one claim in his movie goes too far.

"Stopping climate change is not about saving the planet," says narrator Kevin Sorbo. "It's about climate elites trying to convince us to accept a future where they call all the shots."

I push back at Morano: "I think they are genuinely concerned, and they want to save us."

"Their vision of saving us is putting them in charge," he replies.

And if they're in charge, he says, they will destroy capitalism.