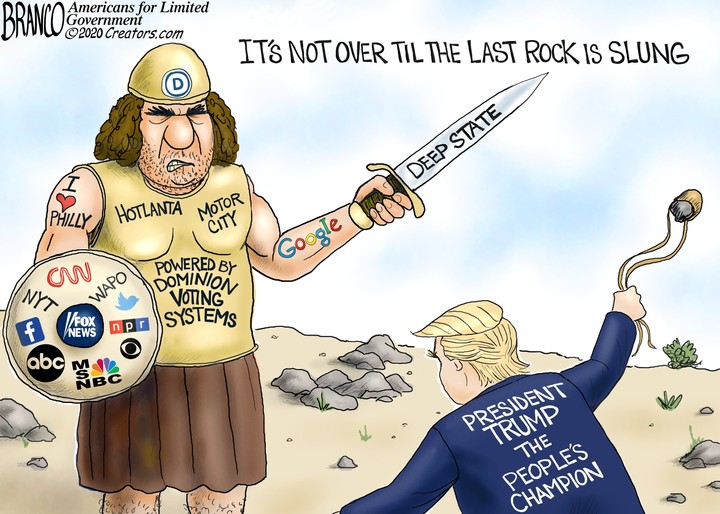 Hate Trump, Inc.'s collective thesaurus is working day and night to convince America that Election Day could not have been cleaner. The no-evidence crowd conveniently ignores some 400 sworn and notarized affidavits submitted, under penalty of perjury, by eyewitnesses in swing states.

Through online copies of legal filings and a priceless new website called HereIsTheEvidence.com, the Internet now features relevant affidavits that are ready for inspection by those who scream: "No evidence!"

• "I personally witnessed two people handing multiple unopened mail in ballot envelopes to two other people who then opened and filled out the ballots against the side of the Biden/Harris van," said one Nevada affidavit.

"I was shocked to see that the ballot machines were controlled by these individuals and not Michigan and/or Detroit residents," Palmer continued. "Many of these out-of-state people carried boxes with Dominion written on them from their vehicles."

• "Large quantities of ballots were delivered to the TCF Center in what appeared to be mail bins with open tops," poll challenger Daniel Gustafson affirmed. Detroit's most pivotal tabulation facility resembled a crime scene. "The ballot bins were not marked or identified in any way to indicate their source of origin."

• "On Wednesday, November 4, 2020, Detroit election officials told us that they were going to process military ballots last," challenger Robert Cushman observed. "I was surprised to see numerous new boxes of ballots arrive at the TCF Center in the eveningâ€¦I estimate these boxes contained several thousand new ballots when they appeared."

• "I heard other challengers say that several vehicles with out-of-state license plates" reached the TCF Center, swore challenger Andrew Sitto. "At approximately 4:30 a.m., tens of thousands of ballots were brought in and placed on eight long tables. Unlike the other ballots, these boxes were brought in from the rear of the room." Sitto added: "I specifically noticed that every ballot I observed was cast for Joe Biden."

• "At approximately 4:50 a.m. I witnessed a man spraying a chemical on a ballot counting machine. He then placed twenty-seven ballots into the machine and I noticed tape on the top of the ballot where a ballot number normally would be," Articia Bomer wrote. "Throughout the night I witnessed him insert these same 27 ballots at least five times."

The two Republican commissioners on Wayne County's Board of Canvassers weighed this skullduggery, and more, and voted not to certify Detroit's election. According to Monica Palmer's affidavit, "I determined that 134 Absent Voter Counting Boards did not balance and many had no explanation to why they did not balance" the numbers of physical ballots with corresponding registered voters.

Palmer instantly was slammed with public attacks. "The comments made accusations of racism and threatened me and members of my family." GOP member William C. Hartmann's affidavit reflected that he and Palmer were "berated and ridiculed" and accused of being "racially mo tivated." Hartmann added: "This public ostracism continued for hoursâ€¦"

Despite this Democrat bullying, Palmer and Hartmann were assuaged with promises of a post-certification audit. So, they reconsidered, joined the two Democrats, and certified the results.


But wait: The Republicans recanted! Democrats reneged on their audit pledge. So, Republicans decided Wednesday to un-bless Wayne County's votes.

This figuratively yanks the blinders from the windows at Detroit's TCF Center, where pieces of cardboard literally were used to scuttle transparency and sabotage GOP poll challengers.

Starting with Wayne County, Michigan, every contested county and state demands not just a recount but a full forensic audit. This moment requires a powerful kick of every rock beneath which the vote fraudsters slither.