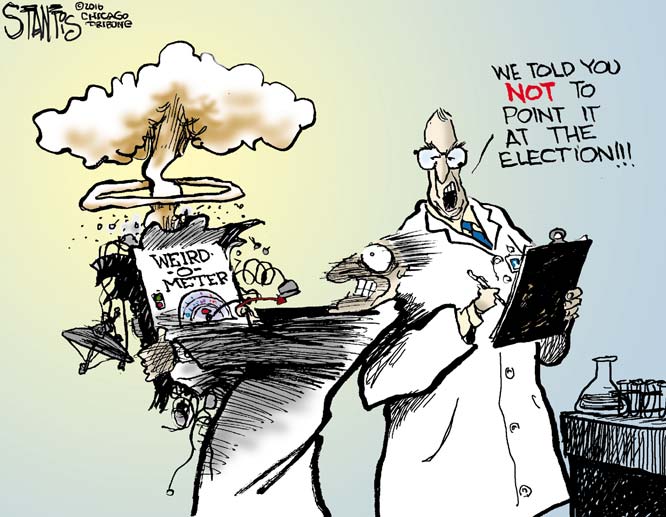 In trying to figure out how former Vice President expected landslide turned into a grim, nail-biting election, we should take a lesson from social science and consider how the problem of moral hazard may have hurt the efforts.

The term moral hazard refers to the way that people tend to become less risk averse when they know they are protected from the consequences of their folly. The textbook example is the well-documented tendency of insured drivers to be less safe on the road, because they will not bear the full cost of any accidents. A professor of mine once likened the problem to the spoiled rich child who sits down whenever he wants, confident that someone will push a chair under him before he hits the floor.

The analogous problem in politics arises when a party's certainty of victory leads to a recklessness during the campaign itself — in particular, a floating of ideas that in a tighter race might be kept under wraps. One wonders, for instance, whether would have run in 1980 on a platform that included such aggressive tax cutting in the top brackets had he not faced so unpopular an incumbent in .

This year, the assumed that the details didn't matter much because they could build a majority principally through an appeal to those who were so fed up with President that nothing would stop them from voting against him. This conception of the electorate in turn led to the reckless driving: the evident belief by many in the party that there was little risk in adopting public stances that in another year voters would find troubling, because "Trump fatigue" would carry the ticket to victory.

The view that animosity would carry the day was not entirely wrong. According to Morning Consult, some 44% of Biden voters said they were voting more against the other candidate than for their own, compared with only 22% of Trump voters.(1) But the very fact that the strategy partly succeeded is a reminder of the risks in translating a narrow victory into a program of governance. When so large a chunk of your coalition hated the other guy, you lack a reliable basis for assuming that they're with you on the issues. Treating them as solid supporters and proceeding with an agenda that might wind up alienating them is a textbook example of moral hazard.

To see why, let's begin with a quick a trip down ballot, where the Democratic blue wave shattered on the boulders of human complexity. As of this writing, the look unlikely to attain their goal of winning the and have lost at least six seats in the . The lamented that "district-level polling has rarely led us so astray." But these "shocking" results are not really hard to explain at all. They're the product of bad driving.

reports that angry party centrists are blaming a combination of the leadership's smugness in imagining that an anti-Trump message would be sufficient to win the day, as well as the inability of candidates in tough races to escape the taint of the left wing: "Moderates in Trump-leaning districts couldn't escape their 'socialist' shadow." , head of the party's Blue Dog caucus, was frank about the cause of the party's difficulties: "That far-left agenda is not what wins districts and holds majorities."

The tendency of the voices of the party's left wing to drown out Biden's centrist appeals had a cost. Consider, for example, the way that the heavily Hispanic counties in , in recent presidential years a Democratic stronghold, went decisively for Trump. How could this have happened? Interviewed by , , head of the , pointed out that a large number of agents are Hispanic: "So when you are talking about defunding the police, and you don't stand up to those types of rhetoric, then it leaves an opening for to come in and take advantage of that."

In this sense, the rise of identity politics created a moral hazard of its own, leaving the party with a false sense that ethnic groups have common interests that lead their members to vote as a bloc. There's limited truth to this contention, and this year the limits became apparent. The seemed to assume that their portrayal of Trump as irredeemably racist would suffice to win them the support they needed among nonwhites. But apparently not every voter in that group was persuaded; at the very least, many found other issues more salient. And whiteness was less important this time around. Preliminary exit polls tell us that Trump actually lost considerable ground among white men. At the same time, he made significant gains among people of color, both those with college degrees and those without.(2)

All of which brings us to the single most important lesson of the exit polling: While Democrats won easily among voters who considered the candidate's "personal qualities" the most important factor, voters who prioritized the candidate's position on the issues over character leaned Republican. And there were a lot more of the latter — 73% vs 23%. A significant fraction of voters care about policy, and were even willing to support an incumbent they probably don't much like because they liked his policies; whereas the effort to make a policy case could hardly be heard amidst the storm of anti-Trump sentiment.


Thus we see the costs of moral hazard. Yes, the gamble on animosity succeeded, but only by the narrowest possible margin. Down ballot, the gamble led to trouble. The party behaved this year like an overconfident driver whose nonchalance leads him right into an accident ... from which, by the grace of God, he emerges with only a few scrapes.

What one hopes is that next time around, the driver will pay more attention to what's actually in the road.

(1) Although polling organizations insist that they have gone to extraordinary efforts to get accurate data in this year of pandemic and early voting, we should still place only tentative reliance on the results.

(2) For example, among voters of color without college degrees, the Democratic advantage dropped from 56% in 2016 to 46% in 2020, meaning the gap was almost one-fifth smaller.