Cult Is as Cult Does 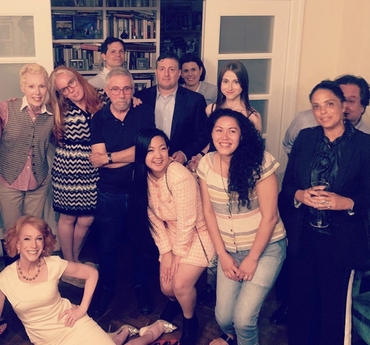 The photograph at left shows a meeting of "the Resistance" in the Manhattan apartment of Molly Jong-Fast (daughter of Erica Jong). Kathy Griffin, the comedienne who famously posed Isis-style with a blood-dripping head of a decapitated Trump, is captured more conventionally relaxed, on the rug in an attractive cocktail dress and necklace.

The economist Paul Krugman is rather less stylishly garbed in dark polo shirt, alongside Philippe Reines, former advisor to Hillary Clinton, and (at far left) E Jean Carroll, who has accused Trump of sexually assaulting her in the mid-1990s.

On the right-hand side of the picture is onetime CNN /Al Jazeera correspondent Soledad O'Brien and behind her, semi-obscured, is George Conway III, the husband of Kellyanne Conway, counselor to the President.

As I said to Brian Kilmeade on the radio, I have the slightest of acquaintances with Kellyanne, having been honored at the same event in Washington and enjoyed the pleasure of dining with her and her young 'uns. No one other than the two principals can know the reality of a marriage, but I cannot imagine so loathing Donald Trump (which is after all a routine ailment throughout Washington, Manhattan and Beverly Hills) that I would be willing to do what George Conway is doing to his wife and the mother of his children.

Vanity Fair's Gabriel Sherman reports that Conway describes Kellyanne as "in a cult" and that their home life cannot heal "until she's cast out of the cult". He is said to want to save his marriage, and, as all relationship consultants will tell you, the best way to save a marriage is to go on MSNBC and attack your wife's boss so that CNN can play it back to embarrass her in person a few hours later.

Who's the cult member here? Kellyanne is doing her job, working for the government of her country, which is supposed to be the kind of selfless "public service" Democrats and media have spent fawning on, at least when it's the Deputy Assistant Under-Assistant Deputy Under-Secretary for Ukrainian Affairs in the Department of Paperwork. She works for a president, who, for some of us who spotted his potential in the summer of 2015, is if anything a little too conventional: Three years in, entire departments of the Trump Administration remain captive to duplicitous RINO squishes or permanent-bureaucracy subversives. In the White House Kellyanne has outlasted both the chancers (Mooch) and fringe figures (Bannon) of the early months, and the more house-trained chaps (Kelly, Bolton) who succeeded them. She serves in a position formerly occupied by Pat Moynihan, Don Rumsfeld, Ed Meese, David Gergen, Karen Hughes, John Podesta, none of whom seems an obvious cult-member, except possibly Podesta. It's a job - whereas cults are usually something you volunteer for.


Like being a member of "the Resistance". There is no shortage of persons willing to go on cable news and denounce Trump - even from the nominally right side of the aisle, such as Bill Kristol, Max Boot, David French, etc. So there is no need for George Conway to be on MSNBC or in Ms Jong-Fast's apartment: he is entirely superfluous to "the Resistance". He cannot be so un-self-aware that he genuinely believes his current celebrity is due to his trenchant punditry or legal scholarship; he surely understands that his appeal to cable bookers is entirely due to his marriage certificate. And he must also know that it inflicts far more damage on his wife and children than it ever will on Trump.

And yet he lacks the self-control to cease doing it. He is in thrall to priorities that no sane man would choose. So who's the brainwashed cultist? If Trump is, as Conway asserts, a sociopath, then what is his accuser? I find it difficult adequately to express my contempt for what this man is doing, but Trump's dismissal of Conway as "the husband from hell" has the merit of being both pithier and more incisive than anything Conway's said about Trump.

~Speaking of slight acquaintances, I also have a tenuous connection with the newly famous Pizza Express in Woking, in that the other day some wanker from the Pizza Express accounts department demanded I pay him twelve quid owing from 2016. Unlike HRH The Duke of York, I cannot recall with eerie precision every detail of ancient visits to a not terribly distinguished pizza chain - although its founder, Peter Boizot, I knew a little back in the days when Pizza on the Park was London's Number One cabaret venue, and I had a pleasant late-night conversation there with Romano Mussolini. How many hack pundits can drop the names of counselors to the President, founders of pizza chains and sons of Fascist dictators in a single column, eh? Namedrops keep falling on my head, as my late chum Larry Adler liked to say.

Where was I? Oh, yeah. As exercises in damage control go, Prince Andrew's interview to explain his relationship with Jeffrey Epstein was a car crash. And not a car crash in the sense of his nonagenarian dad's comparatively minor collision earlier this year, but a full blown multi-vehicle fireball rising to the skies. Half the comics in Britain have already incorporated into their acts the instantly recognizable tropes - the unforgettable pizza, the princely unfamiliarity with Woking, the Falklands War combat that cost the Duke his ability to sweat, His Highness's insistence that he does not go in for public displays of affection.