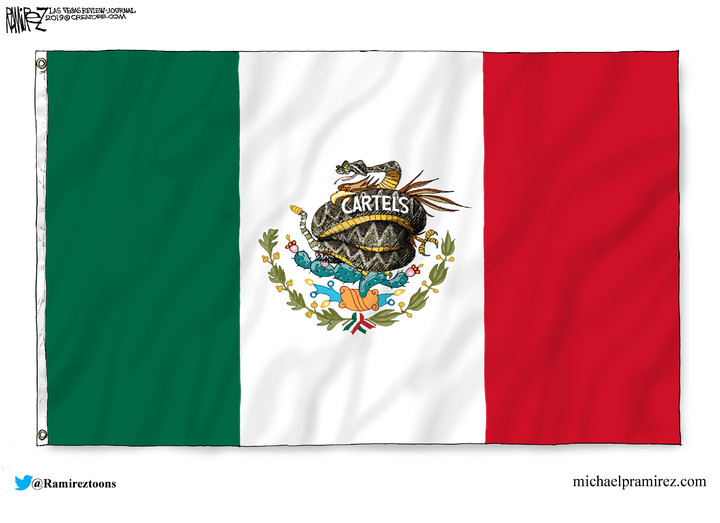 Phooey on Trump tweets. That's what I usually say, but not the other day when utterly sickening, demonic, drug-smuggling gunmen killed nine Americans in northern Mexico. The victims included twin babies and mothers trying desperately if futilely to save the lives of other children from an assault of the kind that took 36,000 Mexican lives last year. Smugglers also helped in the demise of 68,000 Americans overdosing on drugs.

"The great new President of Mexico has made this a big issue, but the cartels have become so large and powerful that you sometimes need an army to defeat an army," President Donald Trump tweeted. "This is the time for Mexico, with the help of the United States, to wage WAR on the drug cartels and wipe them off the face of the earth. We merely wait a call from your great new president."

Trump is right, but Mexican President Andres Manuel Lopez Obrador said no. He is a lopsided leftist who argued in his election campaign last year that he would defeat the cartels with "hugs, not gunshots." One means would be to rescue young men from poverty so they would not seek riches from joining drug gangs. It is certainly true that, long before him, governmental reforms of various sorts did help forge more prosperity and a solid middle class in Mexico, but it is now too late for a kissy-kissy answer. The drug business began taking off in the 1980s and, by 2006, we had something like a gangs-vs.-government civil war eventually leading the outgunned government to back off despite American help.

The gangs have been busily ambushing soldiers and massacring civilians like never before and also taking over cities and industries. Someday they could have it all. We have the most powerful military force in the world and, with cooperation from Mexico, could quickly create an ironclad border and flatten drug gangs with logistical ease and no imperialistic demands. Protecting these good people, our No. 1 trading partners, is a way of also protecting ourselves from more gang incursions, more drugs and enmity reflecting itself in ruinous ways for maybe decades.

For me, all of this has a personal element. I was editor of a newspaper in El Paso, Texas, in 1986 when Mexican drug trafficking was beginning to grow, and a brave, smart, dedicated reporter named Terrence Poppa dove in, first going after a drug czar named Gilberto Ontiveros. The criminal operated in Juarez right across the Rio Grande. Officials pretty much let him do his thing. Ontiveros had a bunch of his men beat up a photographer while asking how to find Poppa so they could execute him. I wrote a front-page, signed editorial saying we weren't intimidated, would dig for more facts and would push law enforcement agencies to act.

Two days later, Ontiveros was finally jailed and Poppa was soon in pursuit of another drug czar, Pablo Acosta, a former peasant who said he got his millions to feed the poor, who sold tons of cocaine and other drugs, who was criminally in charge of 225 miles of border and was a gun fighter like you've never heard of. Cultivating everyone who knew anything into a source, Poppa got a two-day interview with this guy and wrote a series revealing all kinds of horrors. Mexican police who made a good part of their living off of his bribes soon killed him. Poppa's amazing work made him a finalist in the Pulitzer Prize for investigate reporting.

Because of his stories, readers like myself got an introduction to the chaos. I thought it all might go away but it got worse to the point of learning that Juarez was the murder capital of the world at one point. What we need now, it seems to me, is a Mexican leader with the determination of a 13-year-old boy who was at the shooting of those Americans this week. He hid wounded siblings and walked miles in the desert to get help.