Hamas rockets and the idea of two states 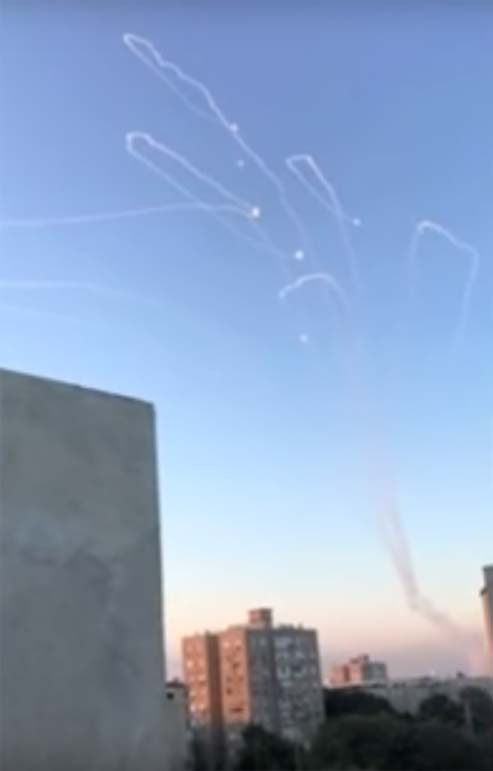 Does it really matter what started the shooting at the border between Israel and Hamas-run Gaza? To outward appearances, it looks like it was something of an accident when a routine security operation inside Gaza went awry and Israeli troops were fired upon, leading to bomb strikes to extricate them. That was followed by the largest barrage of rockets fired at Israel since the war that took place in the summer of 2014.

Hamas's decision to launch hundreds of rockets, which has resulted in the death of one man (a Palestinian working inside Israel) and the wounding of more than two dozen Israelis so far, is being discussed in the international media as just one more episode in an endless "cycle of violence," in which the Jewish state is as guilty as the Islamist terror groups that rule Gaza.

But whether this episode leads to a further escalation of fighting or a return to relative quiet—as the government led by Israeli Prime Minister Benjamin Netanyahu clearly hopes by agreeing to a cease-fire on Tuesday—the ongoing violence demonstrates that it would be utter folly for the Trump administration to push for a new round of peace negotiations with the Palestinians anytime soon.

The problem isn't a lack of negotiations, it's the lack of conditions that could possibly lead to a comprehensive peace that dictates that Trump's foreign-policy team will be wasting its time—and perhaps raise expectations in a way that could lead to more bloodshed—if it pushes ahead with plans to foster what U.S. President Donald Trump has called the "deal of the century."

It must be understood that far from seeking to provoke or attack Hamas, the Israeli government has been doing its best to keep a lid on the situation. In the days before the flare-up, Netanyahu went so far as to allow $15 million in cash donated by Qatar to be driven into Gaza to pay the salaries of Hamas government officials. That was part of an effort to negotiate a lessening of the tensions that have risen this year due to the Palestinian Authority's decision to pressure Hamas by cutting off its financial support of Gaza.

What those who talk about the cycle of violence miss about what has been happening is that although the Palestinian factions speak as if their sole focus was their century-long war on Israel and Zionism, their true enemies are each other. The goal of Palestinian Authority leader Mahmoud Abbas's Fatah Party is to wrest control of Gaza from Hamas, and it is willing to increase the misery of its poverty-stricken inhabitants in order to get closer to achieving that objective.

Since March 30, Hamas has orchestrated weekly demonstrations and attacks on the security fence alongside Gaza committed in the name of the "right of return"—namely, the Palestinian hope of eradicating the Jewish state by advocating for some 5 million descendants of the 1948 Palestinian "refugees" to live in Israel. But what Hamas wants now is to force Israel and Egypt to end the blockade that seeks to isolate a terrorist state that poses a threat to both nations.

Israel cannot allow an open border for Hamas since that would mean an influx of Iranian weapons and material that would strengthen the terrorists' hold on Gaza and their ability to wage war on Israel. But it also wants a return to the quiet that reigned before Hamas's and Fatah's maneuvers led to violence without having to launch an invasion of the strip that will lead to the loss of even more life—and more rockets and missiles aimed at Israeli population centers.

However this ends, what Americans who care about Israel need to know is that peace with the Palestinians requires more than just good will and has little to do with Netanyahu's positions on West Bank settlements.


Abbas and Fatah seek to regain the control of Gaza, which they lost to Hamas in the wake of Israel's withdrawal of every soldier, settler and settlement in 2005. But the reason why Abbas is serving in what is now the 14th year of the four-year presidential term to which he was elected after the death of Yasser Arafat is because he fears that another election will empower his Hamas rivals.

Abbas is too frightened of Hamas to sign even the most favorable peace deal with Israel—assuming, that is, that he actually wants peace. But if Trump's attempt to create a two-state solution on the West Bank did succeed, it's just as likely that it would lead to Hamas operating on the West Bank or even running it.

If Netanyahu's approach to the peace process is generally supported by a majority of Israelis—and his principle foes are heading towards the next elections pledged to carry out similar policies—it is because most Israelis understand that if their country withdraws from the West Bank, the situation they face with Gaza will be replicated in the far larger and more strategic territory.

Imagine a West Bank as armed and as dangerous as Gaza is now, and you are seeing what most Israelis think would be the only logical outcome of a two-state solution under the current circumstances. Until the Palestinians resolve the conflict with Hamas—and until either faction demonstrates a willingness to end their long war by recognizing the legitimacy of a Jewish state, no matter where its borders are drawn—two states is a recipe for more bloodshed, not peace.

Americans who purport to care about Israel should focus on that reality as the current conflict heats up, and realize that any effort to push Israel to give up more territory in the absence of those Palestinian conditions being realized isn't merely unfair, it's a greater obstacle to real peace than any settlement.